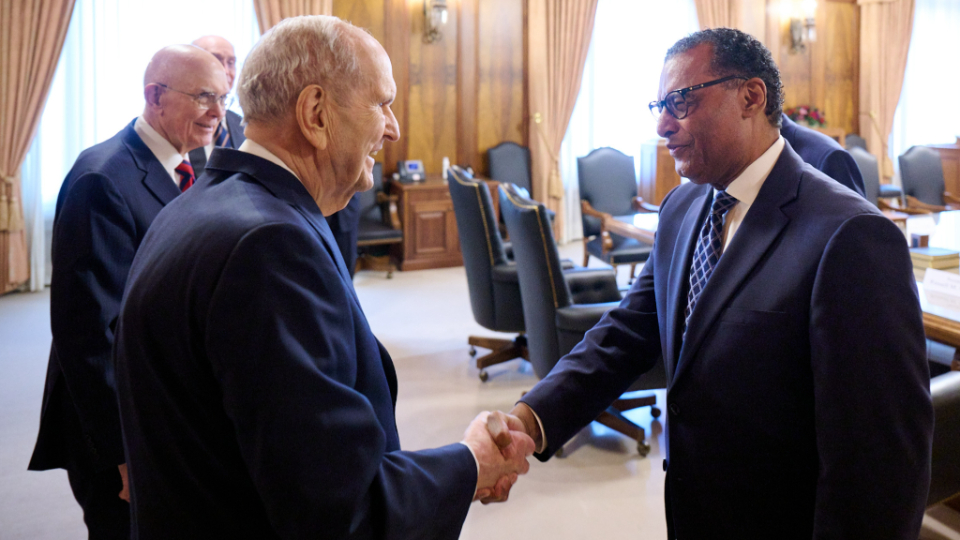 Those words, spoken Thursday by Rabbi Joseph Potasnik of New York, aptly describe why seven faith leaders from the Big Apple visited Utah on Wednesday and Thursday. They saw firsthand the beating heart of the welfare and humanitarian work of The Church of Jesus Christ of Latter-day Saints. They learned more about their genealogy at the Family History Library. They met with Church leaders. And they spoke at Brigham Young University’s annual religious freedom conference.

Quentin L. Cook of the Quorum of the Twelve Apostles called the delegation’s visit to Utah “very significant.”

“We find people that have come to these events, and it has enriched them, and they’ve gone back and they’ve been an influence for religious freedom,” Elder Cook said.

“It’s one of the great, great moments in my life when I get to meet people who are so committed to the cause,” Rabbi Potasnik said. “It’s easy to preach it. But people say you have to see a sermon. We’ve seen many sermons out here on this visit.”

Rabbi Potasnik, a senior rabbi and vice president of New York City’s Commission of Religious Leaders, was joined by four commission members: Commission President and Founder of the Christian Cultural Center in Brooklyn, Rev. A.R. Bernard; Rev. Que English, director of the Partnership Center of the U.S. Department of Health and Human Services; Monsignor Kevin Sullivan, executive director of Catholic Charities of the Archdiocese of New York; and Bishop Dr. Victor A. Brown, senior pastor of Mt. Sinai United Christian Church in Staten Island. The group was joined by Rabbi Diana Gerson, associate executive vice president of the New York Board of Rabbis, and Annette Bernard, executive director of Community Affairs of the Christian Cultural Center.

At Welfare Square, the faith’s largest concentration of facilities that benefit the poor, Rev. Bernard saw the source of the 40,000 pounds of food the Church of Jesus Christ gave to his church in March 2022.

“What impressed me most is the fact that you’re not just engaged in distribution but actually production,” Rev. Bernard said. “That was intriguing. The dairy farms, peaches, peanuts, grapes, cheese. I was just amazed.”

“I remember when I was much younger, if you would go to an event, on the ticket it would say ‘no good if detached.’ That’s a lesson for us. We’re not going to be as good as we could be if we’re detached from one another.”

The Rev. also expressed admiration for the Church’s ethos of volunteerism.

“The culture of missions that you’ve created that results in volunteers giving their time and their talent to a cause I think is also amazing,” Rev. Bernard said. “The whole missions culture that you’ve created in the Church — it speaks to what you’re able to accomplish globally.”

Rabbi Gerson said the aroma of tomato sauce being produced at Welfare Square pointed her to a larger truth about solidarity.