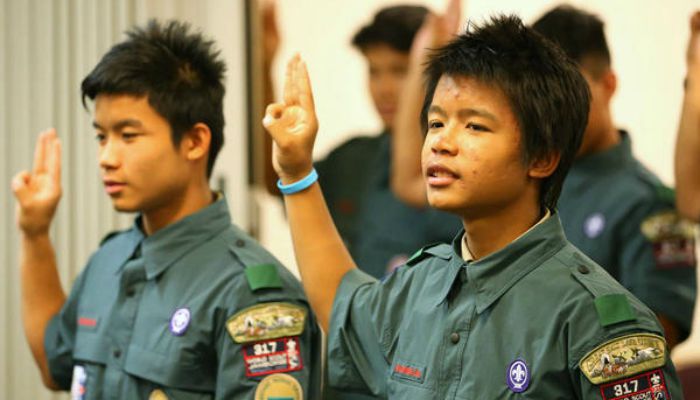 The boys of Troop 1262 spent last week packing and trying on their new hunter green Scout shirts, specially made for their appearance at the 23rd World Scout Jamboree held in Kirara-hama, Yamaguchi, Japan.

Troop 1262 is unique, because its members are descendants of Karen and Karenni refugees from Burma, who fled to Thailand generations ago before migrating to the United States as legal citizens.

The 18 Boy Scouts will begin traveling to Japan on July 24. Following the jamboree, the Scouts travel to Myanmar (formerly Burma), where they will use their native language and visit family members in refugee camps, many of whom the boys haven’t seen since leaving for the United States.

“We got approval from United Nations High Commission on Refugees, to go into the refugee camps; even though the Burmese government has reconciled with the Karen armies, these people don’t trust the Burmese and are reluctant to go back,” said Michael Nebeker, a troop leader who has worked with refugee families for about eight years.

“They’re homes were burned their livestock was killed their lands were land-mined, there is a lot of distress, so there are still a lot of people left in the camps.”

While living in the refugees camps of Thailand, many of the young men learned how to secretly hunt small animals to supplement preferred meat-based protein the diets of their families, which consisted of rice and vegetables.

“We taught them how to swim, how to hike; they’ve taught us how to hunt and fish because they are so good at it,” said Nebeker. “Your parents either worked to provide the protein or the kids snuck out and hunted squirrels, rabbits, foxes, snakes, bird, fish, that’s what they lived on — they know what it is like to go without food for days.

To read the full story on Deseret News, click here.