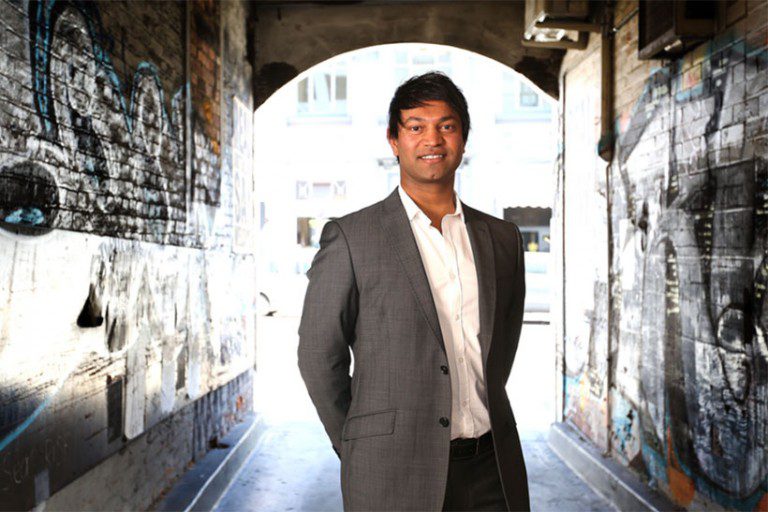 If you haven’t seen the 2016 film Lion, the emotional and gripping tale of a young Indian boy separated from his family and his long journey to find them again, you are missing out. There is a reason this film earned six Academy Award nominations including best picture, but this past weekend at RootsTech when the real Saroo Brierly—whose story the film chronicles—came to speak, he shared that it was a story he was initially very hesitant to share with anyone. “This is very private information,” he said, “what will the world think about a story like this?”

And a truly harrowing story it is. Saroo was only five years old, living in the slums of a town in India, when he followed his older brother to the train station in a neighboring town. His brother noticed how exhausted he was becoming and so he told Saroo to wait there on a nearby bench and he’d be back. Saroo went to sleep for what might have been an hour, or might have been three or four, but when he awoke, his brother was nowhere to be seen.

Wondering if his brother was on the train in front of him, he boarded in his still groggy and disoriented state. This train would take him nearly a thousand miles away to Calcutta, leaving his hometown and his childhood there behind for good.

Upon arriving at the bustling central train station in Calcutta, the five-year-old Saroo tried desperately to retrace his route. He boarded train after train hoping one would take him back to the start, but they were all commuter trains and always brought him back to the same crowded, but lonely platform in a city with a language different than his own.

Finally, he dared to venture out of the relative protection of the train station. He wandered the city for weeks facing more adversity than anyone so little should ever have to. Completely dependent on the help of others, he nearly drowned in the nearby river more than once and was almost abducted before he ended up at a local police station, where he was locked up in the prison for two days.

Eventually, since he was mentally and physically well, the authorities decided to put an ad in the paper seeking someone to claim this child. Nobody came.

Saroo was ultimately handed over to the Indian Society of Sponsorship and Adoption where, after a few months, he was given the option of being placed with a new family. He still remembered those he had left behind, but he said, “I know that there’s no way of returning home. I’ve searched…I’ve got no hope.” He agreed to move to Australia to be with his new parents, John and Sue Brierly, but what he didn’t know was that the search had just begun.

The film depicts Saroo as forgetting most everything about the life in India that he left behind. According to that cinematic depiction, it isn’t until his 20s that things trigger his memory and he begins to feel suddenly dissatisfied with leaving the past in the past.

In reality, Saroo said that he had a “massive void that [had] been sitting there for such a long time” and he didn’t know how to combat it. He recognized that his adopted parents gave him an education and opportunities and a life he could have never had where he was born. He was grateful for it, but he always wondered about his other family and realized in his early twenties that he could never find closure until he made an effort to find them.

So, in an attempt to de-fragment his memories, he pondered and thought through every detail he could picture, every geographical feature, every scene. “Where did the sun come up?” he asked himself, “Were there hills? Was there an ocean? What about cultural events? Was it dry? Was it hot? Was there a monsoon?” He recognized even as he went through this mental exercise that finding that train station where he had last seen his brother would be like, “trying to find this needle in a haystack.”

The best he could hope for at that point was to preserve as photographic and clear a picture as he possibly could of what he had left behind and hope that someday there would be some technology that would allow him to put that information to good use. “And I waited for years and years and guess what came about? Google earth.”

Even with this miraculous modern advancement to aid his search, the process was arduous as he scanned train stations and their nearby towns all over the 1.2 million square miles that make up the nation of India. After searching for nearly five years, he finally directed his search to a section of the country that he had left untouched because it was too far from Calcutta to imagine it being a viable possibility.

“Call it providence, call it serendipity, but I started to search in the west,” said Saroo, “and all of the sudden I came to a train station…and I zoomed in on the [station] and it looked exactly the way I remembered it.”

So many times it seemed like it would’ve been easier to give up. He had friends even tell him it wasn’t worth dwelling on the past. “But in order for me to go forward, I had to go back,” he said.

When he told his beloved, adopted parents what he had found, his mother pulled out a little drawing book of his from his childhood and held up a rudimentary map he had sketched back then. The picture was a perfect match for the satellite image of his hometown that they gazed at now. So, with their permission, he decided to travel back to the India for the first time since his childhood and see if he could find what he was looking for in that place that had been locked in his memory for so long.

After arriving in the country by plane, followed by a four-hour taxi ride to his hometown of Khandwa, he finally stood on the spot he had longed to get back to for so long. Everything looked much smaller than he remembered, but he realized it was because he was so much bigger. He came to a juncture where the business district of the town stood to one side and the outskirts of town to the other. “All of the sudden, the muscle memory in my legs decided to follow a path,” Saroo said, “within about thirty minutes, I was standing at the front of the house where I was born.”

And there, after 26 years, was Saroo’s birth mother, who no doubt had long since believed her son was dead. Their reunion was understandably emotional. “Such a pivotal moment; a moment I thought I would never achieve; a moment where you could say two souls rested—my [mum’s and my own].”

“I didn’t realize that the local policemen had alerted the media,” Saroo told the RootsTech audience. “All of these people started coming from left, right, and center wanting to find out more information about this amazing, profound story…it sort of resonated with the Indian people…and when I went back to Australia, 60 Minutes wanted to do a small documentary.”

So many people wanted the story, but could Saroo share the story? It was a deeply personal journey of self-discovery that had brought him to the arms of his mother again. And a profound moment when he finally brought his Australian mother to India to meet his biological mother. Saroo considers himself blessed to have two mothers now. “A mother that gave me birth and a mother that gave me a second chance at life.” But what would the public do with this deeply personal story?

He had reached the stunning conclusion of his search by “the fusion of the integral elements of hope, determination, sheer grit…” And in addition to that, he “made a choice” and “took a chance.” He finally decided to embrace the opportunity to share his story because he realized that, “there must be other people in the world in a similar situation and if you’ve got knowledge and if you’ve got information to empower, to educate, then why not share it?”

And the RootsTech audience got to see a little piece of the influence Saroo’s willingness to share his story has already had on those that heard it. Just prior to his coming onstage, we learned that a pair of biological sisters who had been abandoned as children at a train station in South Korean and then adopted to different families in different parts of the world, learned of Saroo’s experience and were inspired to try to find each other.

Below is a video of them reuniting for the first time:

Sharing our deeply personal stories can be difficult, vulnerable and even frightening, but it can also have an impact that we may not be able to anticipate. Saroo Brierly showed us that it’s worth sharing if it means you may be an important piece in someone else’s journey towards the thing for which they are anxiously searching.

A thought, I truly believe stories that are difficult or unresolved have every ability to help others, since so many of the circumstances we face do not resolve in mortality. Stories of the mentally ill can teach us symptoms, which may end up saving someone's life. Or can motivate someone to pick this field for research. Or a politician to provide funding. I see your point, but I do not accept it. People who live in functional LDS families do not want to face the realities that some of their brothers and sisters are dealing with. That is why the Book of Mormon warns us against saying that a man has brought his problems upon himself so I do not need to help him. To remind us that that is the usual response of the natural man. Chemo Okazaki was correct. We accept certain trials as valid and judge others as undeserving.

@Randi, I think Saroo felt to share his story because he thought it would inspire hope in someone else's search. I don't think the point is just to share things just to get them out there, nor do I think it's about people only liking happy endings. I think this particular article is talking about sharing stories that might help someone else. Stories that are unresolved or difficult without clear purpose or uplift might be cathartic for someone to share, but also might not be helpful to anyone else. There's still a place for that in terms of understanding each other better and connecting with one another, but I think that's something different than what he was talking about/hoping would come from sharing what happened to him.