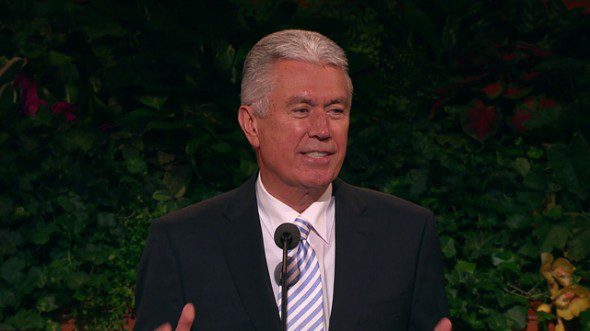 The Deseret News had an hour-long interview with President Uchtdorf as he recalled his escape from East Germany. November 9th marked the 25th anniversary of the fall of the Berlin wall. Here is an excerpt from the article and a link to read the entire thing.

The 11-year-old boy watched terror storm across his mother’s face.

He saw the horror elbow aside her exhaustion. They had been unpacking a little cake to eat, happy because friends said when they reached this hill they would be safely across the border. But now as they sat on the hill, she had spotted a border crossing bar farther up the path.

The crossing arm was painted with communist colors.

“She realized where we were,” the boy recalled this week, 62 years later. Sitting in his pristine, first-floor corner office in the LDS Church Administration Building, President Dieter F. Uchtdorf remembered his mother’s face on that hill in 1952.

“I could see her fear all of a sudden,” said the second counselor in the First Presidency of The Church of Jesus Christ of Latter-day Saints, “and despair all of a sudden.”

They still were on the wrong side of the East German border. She knew from their informants that Soviet border soldiers were due any minute.

Read this story at The Deseret News.