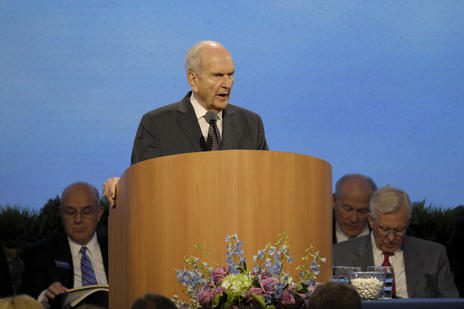 In a recent seminar for new Mission Presidents given at the MTC, President Russell M. Nelson expressed the desire to share a message of “real worth” to the couples soon to depart for the mission field to share the Gospel of Jesus Christ. The important topic he chose to explore was the Book of Mormon, which he called the “most effective instrument in bringing souls unto Jesus Christ.” President Nelson celebrated many of the things that the Book of Mormon is as well as highlighting some important things it is not. The Deseret News reported to following:

The Book of Mormon serves as a clarifier of doctrine. “It refutes many myths. At the same time, it affirms truths previously obscured and reveals many glorious facts of the doctrine of Christ lost or previously unknown,” he said.

President Nelson then listed many of the myths refuted by the Book of Mormon, including the concept of predestination, the notion of original sin, the adequacy of goodness alone without exalting ordinances, the practice of infant baptism, methods of baptism without immersion by one bearing proper authority, and the notion that revelation from God ended with the Bible.

“There are some things the Book of Mormon is not,” President Nelson said. “It is not a textbook of history, although some history is found within its pages. It is not a definitive work on ancient American agriculture or politics. It is not a record of all former inhabitants of the Western Hemisphere, but only of particular groups of people.”

The Book of Mormon, he continued, affirms the existence of a living and loving Father in Heaven. “It affirms the nature of our Heavenly Father’s plan of salvation, happiness and mercy. It declares, as another testament, the generation and divinity of Jesus the Christ. It teaches of His ministry and of His Atonement. The Book of Mormon stands as a global beacon of eternal truth.”