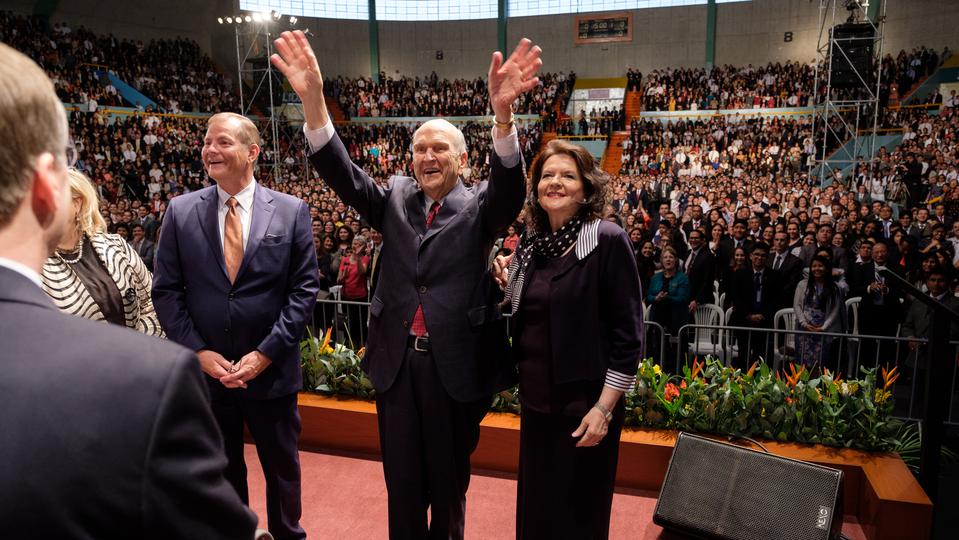 The president of The Church of Jesus Christ of Latter-day Saints began his five-country South America ministry tour with a visit to Lima, Peru, Saturday, October 20, 2018. Thousands of Peruvian Latter-day Saints greeted President Russell M. Nelson and his wife, Wendy, along with Elder Gary E. Stevenson of the Quorum of the Twelve Apostles and his wife, Lesa, at an afternoon meeting for missionaries and an evening devotional.

President Nelson spoke at a devotional from the Coliseo Mariscal Caceres in Lima. The devotional was broadcast throughout Peru.

As he began speaking in English he announced to the delight and applause of the audience that he would speak in Spanish, which he did for more than 15 minutes. In fluent Spanish he spoke of the importance of keeping the commandments, of the blessings of temple marriage and of the Atonement of Christ as the foundation of the Church.

In his remarks Elder Stevenson spoke extensively about President Nelson as the Lord’s prophet. “One of the great blessings is that a prophet is on the earth today who sees revelation for our time. We live in this time when the heavens are being open to us,” he said.

“In ten months [since President Nelson became Church president] we’ve had some great teachings from President Nelson,” he continued. “Can you feel the blessings of having a living prophet here on the earth today? We should pray for him, we should study his words, we should listen to his conference addresses and we should follow his inspired teachings.”

Following the devotional those in attendance reflected on the impact of President Nelson’s remarks. Yubella Málaga was emotional about the president’s visit. “I don’t know how to express it with words. I never thought I would have this privilege. I know that he is a prophet of God. I feel a lot of joy,” she said. Karen Guerrero said, “Tonight’s meeting has been very special to me and also to the people of the country.” Jose Pernil added, “The prophet has a lot of advice for us that if we follow, Heavenly Father promises that our lives will go well.” Angelo Moreno also spoke of the importance of a living prophet: “In these very difficult and crazy times, to have someone who represents the Lord in all his wisdom and guide us in all the things that we have to do is, I think, the most important thing.”

He described the call as “an extraordinary privilege for us. He was very warm and gracious — welcoming. We had a real treat this morning,” President Nelson said.

“The topics were wonderful topics [and] President Nelson described what we do, and what we teach our children,” said Elder Stevenson, who also attended the presidential visit. “That we teach our children to be honest, to be forthright, to follow Jesus Christ, and to honor and sustain the laws of the land, support the governments where they reside.”

“The president…is aware…that we are trying to reach the poor people in Peru, helping them with the things they need,” explained Elder Falabella.

“We also praised the work of his wife, [First Lady Maribel Díaz Cabello],” said President Nelson. “She was not in the meetings, but she is a well‑known educator and very concerned for the welfare of the women and children particularly. She is a wonderful example of the power of a woman in her country.”

In the afternoon, the senior leaders and their wives traveled to a Church meetinghouse in Limatambo for a missionary meeting with five Lima missions, which was broadcast to all missions in the region.

President Nelson also stopped at a potential site for a new temple to be built in the northern part of Lima. It will be the city’s second temple and the nations fourth.

The South America ministry tour runs October 19–28, 2018. The senior Church leaders left Salt Lake City on Friday, October 19, for the visit to Peru, Bolivia, Paraguay, Uruguay and Chile. They will attend a sacrament meeting Sunday morning before flying to La Paz, Bolivia, where they will speak at a devotional in the evening. The ministry tour ends with the dedication of the Concepción Chile Temple on Sunday, October 28.

The Church of Jesus Christ of Latter-day Saints, headquartered in Salt Lake City, Utah, has more than 16 million members and more than 200 temples either in operation, announced, under construction or being renovated around the world.

The Church has two operating temples in the country, the Lima Peru Temple and the Trujillo Peru Temple. Construction is underway on a third temple in Arequipa. A fourth temple, the Lima Peru Los Olivos Temple, has been announced. When that temple is built, Lima will be one of the few cities in the world to have more than one temple.

President Nelson was sustained as the 17th president of the Church in January. Since that time, he has traveled and ministered to Latter-day Saints in Europe, Africa, Asia, North America and South America.