President Nelson calls our time, "the most crucial era in the history of the world" | Meridian Magazine 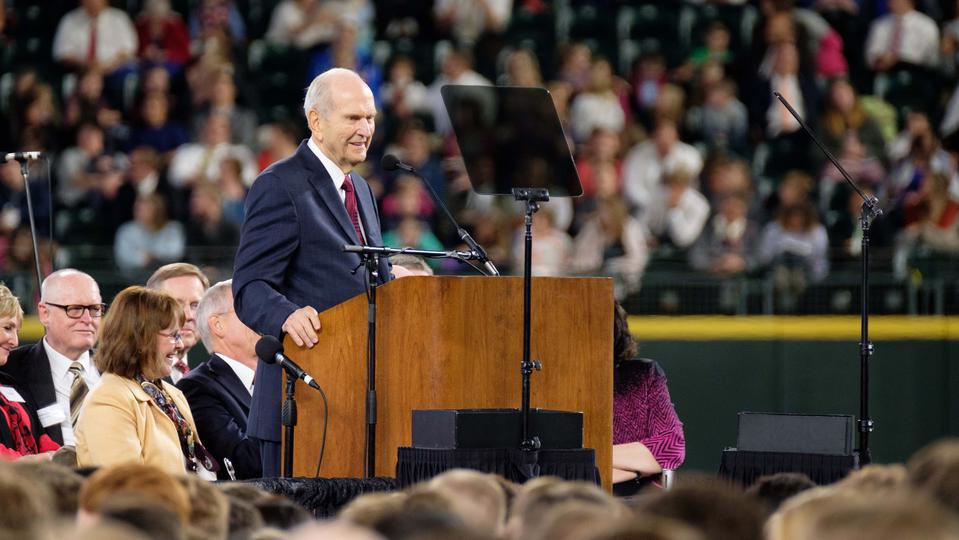 President Nelson calls our time, “the most crucial era in the history of the world”

“We are living in the most crucial era in the history of the world,” said President Russell M. Nelsonof The Church of Jesus Christ of Latter-day Saints. “As a Church we need to be doing what the Savior wishes us to do. And as a people we need to be looking and acting like true followers of Jesus Christ.”

The prophet of the worldwide Church addressed more than 49,000 people at a devotional at Safeco Field in Seattle, Washington, Saturday, September 15, 2018.

President Nelson was accompanied by his wife, Sister Wendy Nelson, and President Henry B. Eyring, second counselor in the First Presidency.

“We have never spoken at a baseball field before,” said President Nelson, who celebrated his 94th birthday last Sunday. “We are grateful to each of you for coming to this devotional. We express deep gratitude to all who have helped to make this historic event possible.”

There are more than 288,000 Latter-day Saints in the state of Washington.

“Our privilege to hear the word of God from a living prophet is one of the great joys of being a member of The Church of Jesus Christ of Latter-day Saints,” said President Eyring. “As the Church moves to every nation and people, and in the last days, we can expect and take joy in new messages coming from God through the prophet.”

President Nelson focused on five lessons he has learned throughout his life as a heart surgeon, general authority and father. “I have been reflecting on other things I have learned during these many decades on this earth.”

The senior leader of the more than 16 million member global Church shared a story of a rafting experience that he had with his family on the Colorado River. He was thrown out of the raft when he wasn’t hanging on.

President Nelson said, “If I have learned anything in my life, it is that our ultimate security and our only enduring happiness lies in holding on to the iron rod of the restored gospel of Jesus Christ, complete with its covenants and ordinances. When we do so, we can safely navigate through rough waters because we have access to God’s power.”

The second lesson he said he has learned is that the Book of Mormon is the word of God. “I renew a promise I made in general conference nearly a year ago, that if you will prayerfully read from the Book of Mormon each day, you will be immunized against the evils of the day and be drawn closer to the Lord.”

Third, President Nelson encouraged Latter-day Saints to focus on eternal life and less on “the honors of men” that “fade into oblivion compared to what the Lord has in store for His covenant-keeping children.”

“I realized that there are actually very few things in this world that have eternal significance. Having received and honored essential ordinances and sacred temple covenants meant everything,” he said.

President Nelson continued, “I plead with you not to let the temptations of the world — including the time-consuming allurements of your employment — distract you from the real reason you are here on earth.”

Fourth, he taught that the “Lord often uses the unlikely to accomplish the impossible.”

President Nelson recalled an assignment he received from President Ezra Taft Benson in 1985 to open the countries of Eastern Europe for missionary work. “I set out to do what seemed utterly impossible. … In the year 1992, I was able to report to President Benson that the Church was now established in every country in Eastern Europe.”

“The Lord likes effort. Then He blesses our best efforts,” he said.

Finally, President Nelson spoke to the audience about service. “We are happiest when we are thinking about someone other than ourselves.”

He explained, “This is why at the last general conference we emphasized ministering as a higher, holier way of taking care of each other. This is also why the Church actively engages in humanitarian service around the globe.”

President Nelson said the Church partners with agencies such as the Red Cross, Catholic Charities and Islamic Relief for much of its humanitarian work.

“Whether we are digging wells in Africa, providing wheelchairs to those in need in Peru, or among the first to respond after natural disasters anywhere in the world, our efforts are designed to help all mankind. No shipments are labeled ‘For Latter-day Saints only,’” he said.

President Nelson has been ministering to Latter-day Saints around the world since he became the 17th president of the Church in January. His recent travels have taken him to Europe, Africa, Asia, Canada, the Caribbean and locations within the United States.

The Nelsons and President Eyring travel to Vancouver, British Columbia, for a devotional on Sunday, September 16, before returning to Salt Lake City.