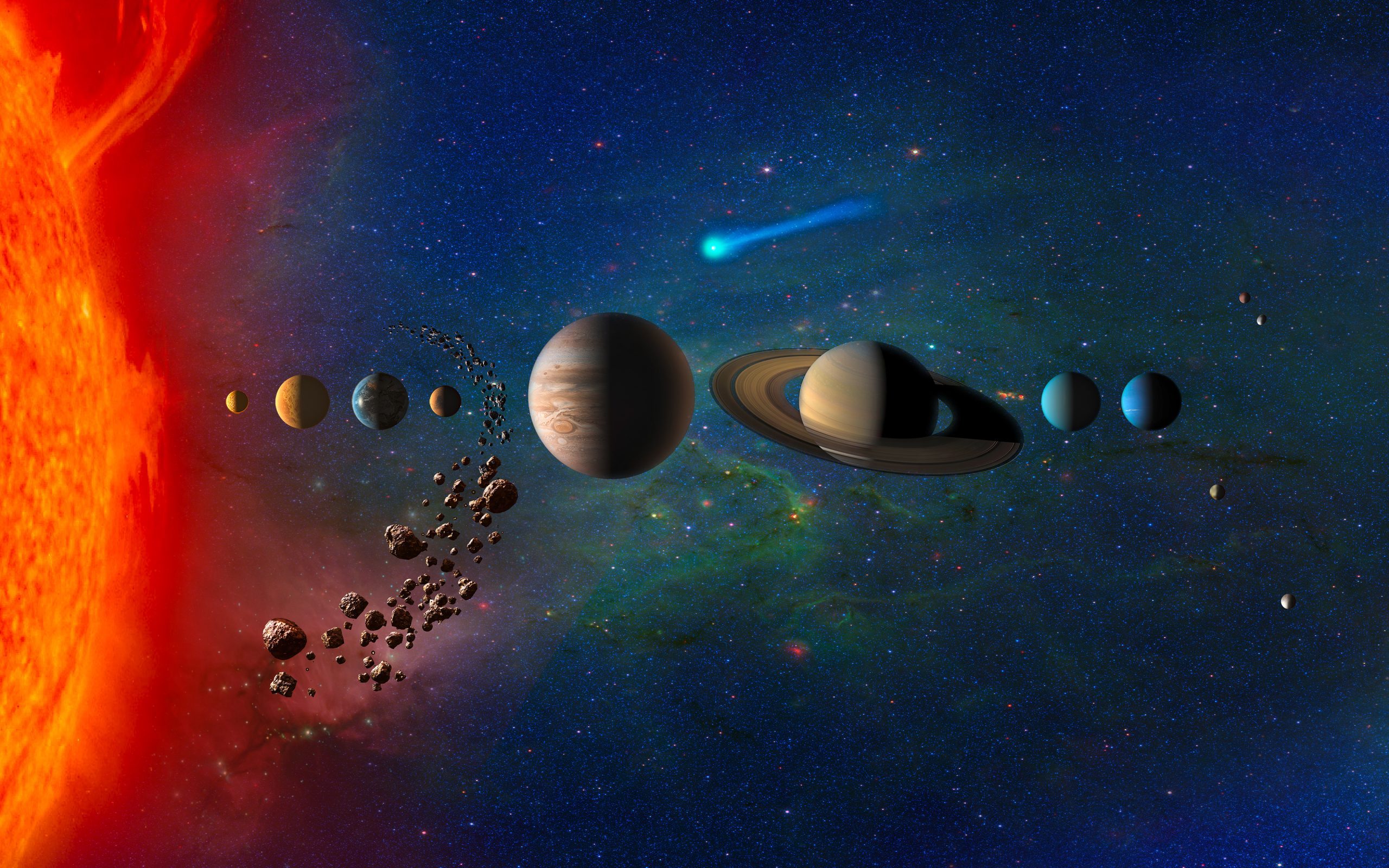 One of the treasures of the Restoration is the brief summary in the Pearl of Great Price where the Lord reports on plans and progress of the project of the creation of this world.

“And there stood one among them that was like unto God, and he said unto those who were with him: We will go down, for there is space there, and we will take of these materials, and we will make an earth whereon these may dwell;” (Abraham 3:24)

Note that the Lord was talking “unto those that were with him.” It looks like an engineering development team meeting in progress.

I wonder at what point the cleanup of the inner solar system would have been discussed along with the high-energy gravity-powered tools to implement the plan.

Since the 1995 discovery of the first “hot Jupiters” that had spiraled into extremely tight inner solar system orbits of distant stars,[i] scientists have discovered a possible mechanism where gas giants like Jupiter and Saturn could move between inner and outer solar system orbits and not just get stuck as a hot Jupiter to forever spin furiously right by the Sun.

That mechanism involving both Jupiter and Saturn is called the “Grand Tack.” [ii] [iii]

Video #1: Youtube video on Vortex coin bank toy that can show how an object can spiral into the inner solar system and interact with other objects also being pulled into or near unto the Star.

Finding a mechanism whereby Jupiter and Saturn could slingshot “uphill” back to the outer solar system is the planetary system parallel to the sailing boat’s “tack” to move into a headwind via a zig-zag course.[v]

Here is the beautifully done simulation of the Grand Tack theory. This is the video that I want everyone possible to see.

Here is some of the text of the demo documentary plus my comments.

“The model shows Jupiter’s inward spiral known as the grand tack. As the giant planet’s orbit shrinks, it sends the inner solar system into chaos. Jupiter sends planetoids into loopy orbits that end up sending them out of the solar system.”

Finally, Jupiter feels the pull of another growing planet–Saturn. Both Jupiter and Saturn end up in current orbits and the inner solar system has been cleaned up to allow it to become a telestial world for God’s children.

Jupiter is blipped back into current orbit as is Saturn. The inner solar system is now patrolled by numerous tiny planets that otherwise the comets and asteroid pieces would destroy the fragile earth too frequently for life to flourish.

Here the simulation speeds up to cover the next 50 of 100 million years. As these planetoids joggle one another, their orbits destabilize. After the dust has settled, the number of planets is now down to five (not counting Mercury and Venus: smaller than expected 1) Mars, 2) Earth, and a Mars sized world 3) Theia that will be used to create the moon. (Plus Jupiter and Saturn)

Scientific Testimony that “There is a God”

The science behind the Grand Tack and other new theories to me is part of the powerful witness of God talked about by Alma in his debate with Korihor.

“All things denote there is a God; yea, even the earth, and all things that are upon the face of it, yea, and its motion, yea, and also all the planets which move in their regular form do witness that there is a Supreme Creator.” (Alma 30:44)

[i] Ronald P. Millett, “Scientific Clues about How the Lord Accomplished the Creation of the World,”·Meridian Magazine,  May 15, 2018.

RMNote: I hope that everyone that reads the current article will also read this article from three years ago.

“One of the most positive fruits of the great latter-day restoration is the ongoing reconciliation of the so-called conflict between science and religion. “Truth is truth,” declared President Ezra Taft Benson, “whether labeled ‘science’ or ‘religion.’” As a powerful example of that reconciliation, recent discoveries in astronomy are resulting in revolutionary new theories of how habitable worlds and their solar systems are created.[i]

“Since the discovery in 1995 of a “hot Jupiter” planet circling a nearby star at an unbelievable speed of just four days per orbit, the theories of how solar systems are created and evolve have been overturned and new theories proposed. Instead of a single roll of the dice as it were to configure stable fixed orbits for the whole solar system, along with their starting positions, planets are now believed to be able to have their orbits changed multiple times and move long distances from where they were initially created, dramatically affecting other planets’ sizes, orbits and characteristics.These kinds of theories used to be considered heretical. They postulate that “catastrophic” events organized solar systems, as compared with the formerly accepted “uniformitarian” theories with initially fixed planetary orbits.

“51 Pegasi b is an extrasolar planet approximately 50 light-years away in the constellation of Pegasus. It was the first exoplanet to be discovered orbiting a main-sequence star,[1] the Sun-like 51 Pegasi, and marked a breakthrough in astronomical research. It is the prototype for a class of planets called hot Jupiters.”

“Hot Jupiters are a class of gas giant exoplanets that are inferred to be physically similar to Jupiter but that have very short orbital periods (P < 10 days).[1] The close proximity to their stars and high surface-atmosphere temperatures resulted in the moniker “hot Jupiters”.[2]

“Hot Jupiters are the easiest extrasolar planets to detect via the radial-velocity method, because the oscillations they induce in their parent stars’ motion are relatively large and rapid compared to those of other known types of planets. One of the best-known hot Jupiters is 51 Pegasi b. Discovered in 1995, it was the first extrasolar planet found orbiting a Sun-like star. 51 Pegasi b has an orbital period of about 4 days.

“The Grand Tack is a scenario for early inner Solar System evolution, published in 2011 in the journal Nature ([arXiv]). This project has possible implications for many aspects of planetary science, and therefore we have prepared a longer description with more details than are typically available in a relatively short publication. This task is in progress, so I apologize if it is short on details right now.”

Ronald P. Millett, “Scientific Clues about How the Lord Accomplished the Creation of the World,”·Meridian Magazine,  May 15, 2018.

[iv] Address of Walsh simulation, the last image in the paper:

My grandad used to say, "Everything is more complicated than it looks at first. " Building a solar system appears to be something like rearranging the tiles in a puzzle tray or a rubiks cube; each piece has to move repeatedly in a set pattern before the final picture emerges. The moves look random until it starts to fall into place. I love how Father put all these clues out there for us, out of sight until we're ready for them.