“Out of Liberty”: The Story of Liberty Jail as You May Not Expect | Meridian Magazine 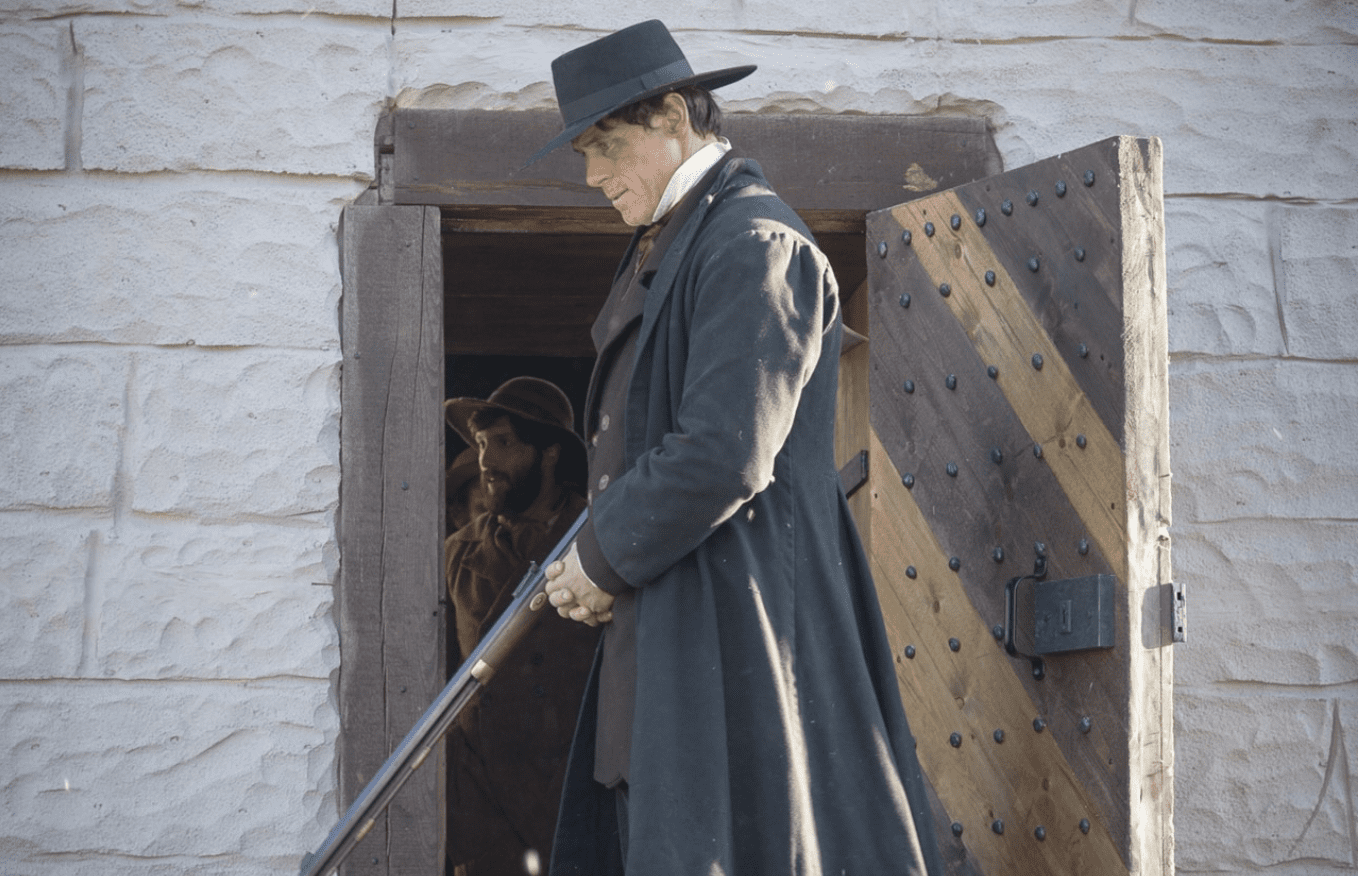 “Out of Liberty”: The Story of Liberty Jail as You May Not Expect

Out of Liberty hits theaters September 13. Be sure to see it opening weekend as that will impact its wider distribution. To get tickets, CLICK HERE.

It’s been said that “Liberty” was a cruel and ironic name for the prison where Joseph Smith, his brother Hyrum, and other leaders of the Church were held in miserable conditions for 155 days while outside, their families suffered the persecutions of the mobs. It is the daily details of this difficult season, which we too often reduce to the single night’s entreaty that resulted in the contents of Doctrine and Covenants 121, that is chronicled in a new film from director Garrett Batty (The Saratov Approach, Freetown).

But Out of Liberty doesn’t tell the story of Liberty Jail in the expected way. Instead, we are shown these prisoners and their situation through the eyes of a jailer who has an interest in upholding the law and no belief in their faith. His is a journey of growing understanding, but this is not a quiet, historical drama of conversion. Out of Liberty is a western jailbreak thriller.

“By page 5 [of the script], I knew it was something special,” said actor Jasen Wade (17 Miracles) who plays Samuel Tillery, the jailer who stood watch at Liberty Jail. Jasen said he appreciated that this was not a story that was preachy or overly didactic, but instead it was, “an authentic western that just happened to be about a couple of guys in jail that we know about.”

Though historically, we don’t know as much about Samuel Tillery as is portrayed in the film, when it came time to develop the script, Garrett Batty was fascinated by the idea of a man who started out so stringent towards his duties as a guard and became a person who ostensibly helped these men go free. How does a person go through such a change? That is the story this movie hopes to tell.

It was an interesting exercise for Jasen, who is a Latter-day Saint, to step into the role of an outsider with little knowledge of “the Mormons” beyond a sense that they must be in prison for a good reason.

Meanwhile, the role of Joseph Smith is played by Brandon Ray Olive, an actor who—prior to meeting his wife—thought that Latter-day Saints and the Amish were one and the same. It was with fresh eyes and not lifelong experience that Brandon approached the role of the prophet. Though not of our faith, he understood the weight of responsibility he would carry to portray someone so beloved and revered by so many.

Despite the pressure of this portrayal, because of the expectations of who Joseph should be, this film takes a deliberate departure from the glowing depiction of the prophet we’ve become accustomed to. “We’re not showing Joseph in the powerful light that [people] are used to,” said Jasen, “These were his darkest days, these were the hardest days of his life. There’s a reason why we got the scriptures from this moment that we did. He had to go through this. He was powerless and I think God did it intentionally…He had to get to that point where he solely relied on God.”

Indeed, those that were at Liberty Jail left the experience changed men. And it is through recognizing the depth of his dependency on the Lord that Joseph could fully embrace his prophetic calling, making this movie as Batty puts it, almost a superhero origin story.

But the intended genre of Out of Liberty is a western and Joseph’s is not the only story being told. In fact, one of the great strengths of this film is the way the storytelling allows the audience to feel genuine sympathy and understanding for multiple sides of a deep divide. The mob in this film is not a sea of anonymous, spitting, thugs, but has a leader whose brother was killed by a Mormon and who believes his cause is just. And though you aren’t necessarily rooting for him, you understand how he might think what he’s doing is justified.

Likewise, you feel for the confusion of Sam Tillery, the jailer with a past that makes him that much more intent on upholding the law and doing what’s right and hoping beyond hope that those two are one and the same.

The truth is unclear to many and the issue isn’t simple to resolve. And the fear and lack of understanding that turns to hatred isn’t totally unfamiliar to the political din and strife and unrest that is becoming a norm in our society today.

Though filmed in an astounding 11 days on the north shore of Utah lake, this film manages to bring in a few important elements of western authenticity that makes it feel like a much bigger budget film. Chief among them is the beautiful score by Robert Allen Elliott (The Saratov Approach) which has the intensity and scope to make this feel like a classic, but the subtlety and softness to give extra punctuation to the most poignant moments.

“Garrett wanted me to approach this score standing on the backs of some great ‘Western’ scores BUT he also wanted a fresh voice,” said Robert, “His ‘direction’ to me from the start was for a gritty, soul-piercing Western… something totally original. It needed to carry the film without getting in the way. And it needs to evoke a full range of emotions.” This was a tall order, but I think he filled it.

Another standout element of the film for me was church history’s most wild west figure Porter Rockwell, portrayed by Corbin Allred (The Saratov Approach, Saints and Soldiers). This film sees Porter before his signature long hair and beard and perhaps at just the beginning of the gunslinging. Rather than the gruff, hardened lawlessness that one might expect, Allred gave his version of Porter an earnest, almost childlike loyalty to Joseph through which you could still see his lion heart.

“The focus of my performance and what kind of drove me and inspired me in this project was to be able to really portray the testimony of Porter Rockwell,” said Corbin. “He had such a strong testimony of his friend [Joseph], that his loyalty is something that would’ve taken him to the grave, had he been at Carthage, for example.”

Though Corbin jumped at the opportunity to play this role for a variety of reasons, one great benefit he found was the chance to explore and act out his own personal love and respect for the prophet Joseph Smith.

“Part of this was a selfish endeavor in taking this part—in a small way, I injected a little of myself into this part and enjoyed so much being able to be Joseph’s friend on set. I’m hopeful that that shows in the performance.”

Brandon Ray Olive also appreciated spending time with Joseph Smith in the process of playing him. He called the experience of being on set and making this film a spiritual one and that moving forward, he will carry this experience with him.

Out of Liberty isn’t Liberty Jail as you might expect to see it, but with a western twist, we are invited to not just see church history as a list of places and events, but as real days from the real lives of people who lived and struggled, and whose stories are worth seeing with new eyes and hopefully learning something from.

Out of Liberty hits theaters September 13. Be sure to see it opening weekend as that will impact its wider distribution. To get tickets, CLICK HERE.

2 hours made this film too long. We started losing interest in the long, slow movie

The movie was exciting and the main character, the jailer, was portrayed vividly and I thought he was terrific. It was for the most part accurate historically. There was some good dialogue from the other cast members. I was more critical than most would be because I taught in the Church Education System for 38 years, but I really enjoyed the movie and would recommend it highly.