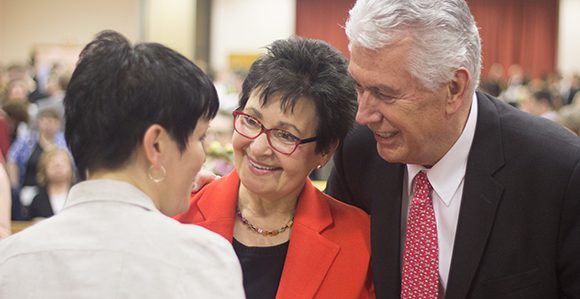 Number of International General Authorities Has Quadrupled in Past 40 Years

For more than four decades, President M. Russell Ballard has witnessed the Church’s worldwide expansion. Called in 1976 to the First Quorum of the Seventy, he has watched an increase of nations where the Church is established, proselytizing languages, and international membership.

In February 1996, Church membership passed a historic mark. Of the Church’s 9.4 million members, more resided outside the United States than within. That global growth continues now, with 9.5 million of the 16.1 million members outside of the U.S., with publications of the Church appearing in 188 languages.

Accompanying those changes over the same period has been a dramatic increase in the number of international General Authorities—those born outside of the United States.

In 1978, those born outside of the United States comprised 14 percent of the General Authorities serving; today, it’s 40 percent.

“The Lord raises up whom He needs from wherever,” said President Ballard, Acting President of the Quorum of the Twelve Apostles. “It sends chills down my back to see who they are, what they’re doing, and who they’ve become.”

“The Church is a worldwide church, and having international General Authorities shows it in a very visual way,” Elder Costa said. “It shows the Church has prepared leadership everywhere.”