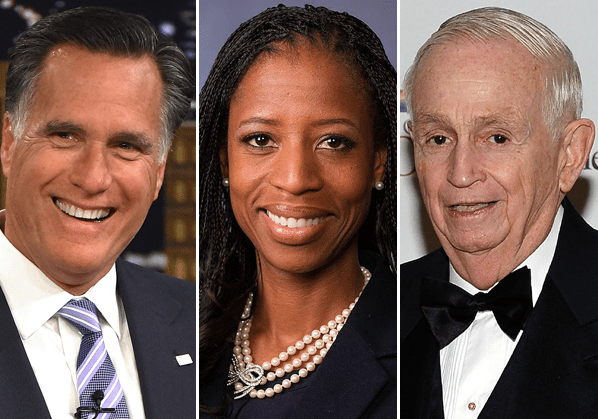 Newsmax’s 50 Most Influential Mormons in America

Members of the Church of Jesus Christ of Latter-day Saints are important leaders in many fields, including government, economics, entertainment, science, education, and sports. Most would agree Mormons “over index” in many fields that affect millions throughout the world.

To compile this list, our editors combed through many online sources and consulted with several well-connected and informed Mormons. Still, a list like this is subjective at best, and should be viewed as interesting and informative, rather than definitive. We very likely missed people who should have been on the list, and we welcome your input and correction for future editions. And, while picking only 50 is difficult, coming up with a ranking is even more subjective. We tried to rank them in what we believe is a somewhat logical order, but certainly recognize that many readers (and perhaps people on the list!) may take exception with the ranking.

Also, there are many more members of the U.S. Congress than are listed. They easily could have all been listed. We opted instead, however, to list only those with particular influence, such as committee assignments, caucus leadership, etc.

Finally, it is important to note we opted to not list the most obvious influential Mormon, namely the Church’s beloved president, Thomas S. Monson, who faithful Mormons revere as a living prophet. Monson, like the other “General Authorities” are clearly the most influential Mormons, certainly on the members of the Church. Nonetheless, for purposes of this list, we opted to look outside the Church hierarchy, and focused on leaders who are currently active in their respective secular fields of endeavor.

We hope you enjoy the list and welcome your corrections and suggestions for future lists (comments can be sent to [email protected]).

1. Mitt Romney — A fifth-generation Mormon, the former governor of Massachusetts and the 2012 Republican presidential nominee served as a missionary in France. He and his gifted wife, Ann, are the parents of five sons. In addition to a distinguished career at Bain Capital, Romney is widely credited with rescuing the scandal-ridden Salt Lake City Olympic games.

2. Bill Marriott — The executive chairman and chairman of the board of Marriott International led the transformation of the family restaurant business into the world’s largest lodging company. Marriott is easily one of the world’s most recognizable and respected business leaders. He is also known for his tireless work within the Church and philanthropic communities.

3. Orrin Hatch – Now in his seventh term as a U.S. senator for Utah, Hatch is currently chairman of the powerful Senate Committee on Finance. He is also a member and former chairman of both the the Senate Judiciary Committee and the Senate Health, Education, Labor, and Pensions Committee. Known traditionally as a conservative, Hatch is one of just a handful of senators who can and does effectively reach across the aisle on important legislation.

4. Jack Gerard – Currently president of the influential American Petroleum Institute (API), a position he has held since 2008, Gerard has been active as a leader in the Church and is a board member and past chairman of National Capital Area Council of the Boy Scouts of America. He and his wife, Claudette, have eight children, including twin boys they adopted from Guatemala.

5. Clayton Christensen — Clayton M. Christensen is the Kim B. Clark Professor of Business Administration at the Harvard Business School. He is known as an expert on disruptive innovation. He is the author of many critically acclaimed books, including several New York Times best-sellers, such as “The Innovator’s Dilemma.” Christensen is the co-founder of Innosight, a management-consulting company; Rose Park Advisors, an investment firm; and the Innosight Institute, a non-profit think tank. Christensen is widely acclaimed as one of the world’s most influential business theorists. In 2015, he won the Edison Achievement Award — a prestigious award given to world leaders in innovation. Previous winners include Steve Jobs, Elon Musk, Ted Turner, and Bill Marriott.