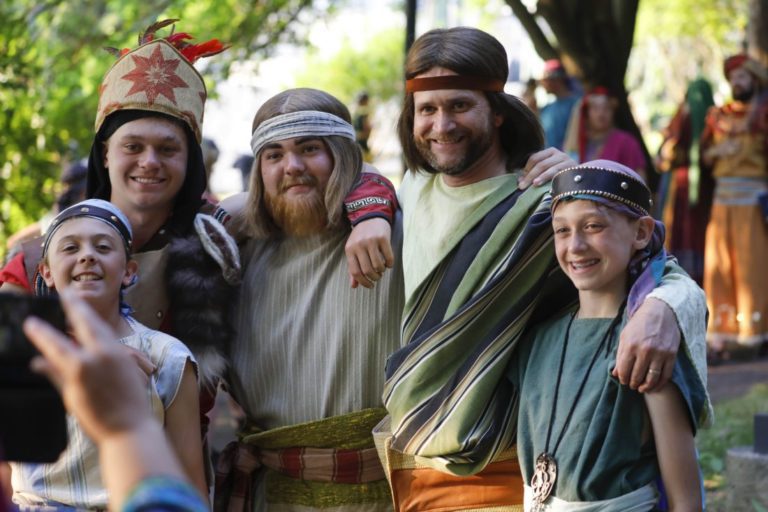 The following is excerpted from The Buffalo News. To read the full article, CLICK HERE.

Every year since 1937, Latter-day Saints have made their way to a 10-acre patch of land east of Rochester to stage a pageant on their sacred Hill Cumorah, where they re-enact scenes from the Bible and the Book of Mormon. Members of the faith believe it was on that hill that an angel called Moroni met with church founder Joseph Smith in 1827 to reveal golden plates that would later be translated into the Book of Mormon.

The play is cast one week before opening night. The stage is assembled, light towers and special effects are trucked in. Dances and battle scenes are choreographed, lines are learned and rehearsed. Then just 17 days later, after performing for what is usually about 30,000 people, everyone packs up, ships out and Hill Cumorah is still again.

Next year, everyone will pack up and ship out for the last time, as the pageant ends its 83-year run.

The sheer scope of the event undertaking – in addition to the cast of hundreds, 150 of them work security, parking and other roles – is part of the reason the production will end in 2020. Other considerations include the cost, time commitment, security concerns and wear and tear on the church’s sacred sites in the Wayne County town of Palmyra, a church spokesperson said. Most families plan their vacation around the event, and organizers prepare for it year-round. The church felt that time could be better spent on other things, such as studying together at home.

The impending close is drawing bigger crowds. Friday night’s show saw its biggest audience in recent memory: 7,000 people, where 4,000 to 5,000 is more typical.

“When you’re taking down those 8,000 chairs and putting them away in the truck, you get reminded it’s ending,” said Jakob York of Orchard Park, whose wife, Mindy, and four sons all play a part in putting on the production. “That’s a bittersweet moment. It’s hard to go.”

Having seen this spectacular production in past years and feeling the great Spirit that attended it, I have to say, "This is a very SAD day!"