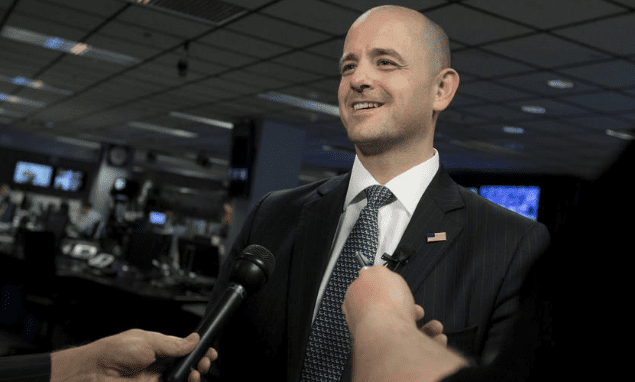 New Poll Shows Evan McMullin Ahead of Clinton in Utah

A new Rasmussen poll released Monday found that Evan McMullin’s popularity in the Beehive State is rivaling that of the two major party candidates.

The poll showed that McMullin trails Republican nominee Donald Trump by one point, 30 to 29 percent, and is ahead of Democratic nominee Hillary Clinton, who had 28 percent. Libertarian candidate Gary Johnson has 5 percent and Jill Stein has 1 percent of the vote in the deep red state.

“Should McMullin win the state of Utah, he would be the first independent since 1968 to take electoral college votes,” according to the poll. “McMullin and his running mate Mindy Finn have gathered the attention of the national media since they began to make polling strides in Utah. Campaign efforts at the weekend were also targeted at Idaho.”

The poll, which surveyed 750 likely voters by phone, asked participants which candidate they would vote for in the election if it were held today.

Trump and Clinton aren’t viewed favorably in Utah, though. About 54 percent of people find Trump unfavorable, while 14 percent find him somewhat unfavorable. Meanwhile, 12 percent see him as very favorable and 19 percent somewhat favorable.

Clinton is seen as very unfavorable by 60 percent of respondents and somewhat unfavored by 12 percent.

It is worse than futility. It will be helping to hand victory to those who are trying to destroy our republic. I have voted third party in three of the last eight elections, but I am not about to do so this time. There is too much at stake.

Futility? Not in the bigger picture! Forbes: “'Why should I throw away my vote by giving it to some no-hoper fourth-party candidate?' And the answer is that you’re throwing away your vote if you give it to someone that you can’t support in good conscience. The only way to make your vote count is to vote for someone you believe in." https://www.forbes.com/sites/aviksaroy/2016/10/18/the-conservative-alternative-to-donald-trump-isnt-gary-johnson-its-evan-mcmullin/