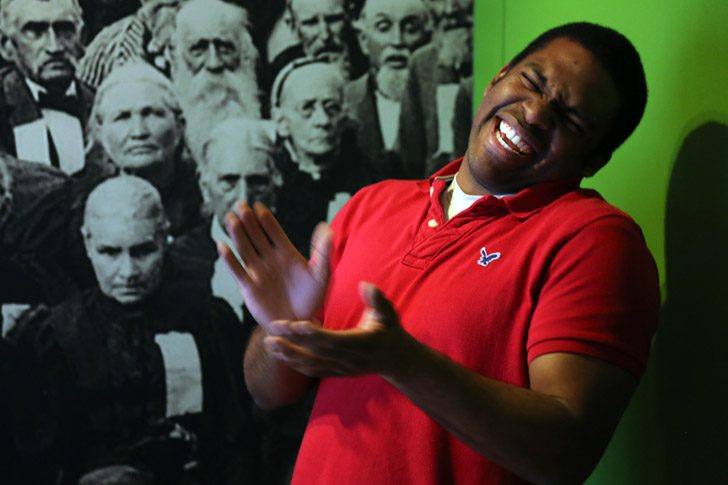 Enter through the doors of the new FamilySearch Discovery Center in the Joseph Smith Memorial Building and suddenly family history becomes irresistible. Just opened in conjunction with the Roots Tech 2015 conference this week in Salt Lake City, the center, which is the first of its kind anywhere, intrigues with cutting edge technology that allows you to interface with large displays that tell you about yourself and your roots. What could be more intriguing?

It’s a Museum of Me, the directors say, with each exhibit telling you more about your ancestors. Dennis Brimhall, CEO of FamilySearch, said “People just love to look and find and discover things, and then to combine that with the innate curiosity we have about ourselves, this new experience is a remarkable thing.” The motivation is to interest more people in family history.

Michelle Powell, who was at the opening with her children said that all they wanted to know was, “When can we come back again?” She said the experience for her was like entering into the FamilySearch site and being right inside the computer screen to explore.

Merrill White, a manager for the Discovery Center said, “It’s fun to see youth groups and families laughing at the experiential stations and hollering across the facility for others to come see what they discovered about themselves or their family’s history. We like to see them surprised at how fun their family history an be.”

Visitors who come are issued a custom iPad where they log in with their lds account number so they are tied into their own information at FamilySearch. Then they can visit 7 stations where their own data comes alive on big screens when they dock their iPad. Teenagers were the hosts walking us through and explaining each station.

“We always used to think family history was for old people,” said Brimhall. “Not any more.”

Walk with me through the experience.

Explore my Story: Here on a giant touch screen is a map of the world. Click a button, and suddenly your ancestors going back eight generations from you are shown on the screen with their location of birth. Ever wonder what tangle of nationalities you are? You can see it a glance.

For me I had a conglomerate of relatives in the British Isles and another bunch in America with a healthy percentage from Denmark. What was fun was to see a pie chart which showed what percentage of my ancestors came from each of many countries.

Push another button and you can see which of your ancestors was first converted into the Church. I was sitting next to Dawn Armstrong, whose story was made famous in Meet the Mormons. My first ancestor joined the Church in May of 1830. She was the first one to join the Church in her family.

“It makes it so visual and simple to see what I need to do to gather my family,” she says.

Picture my Story: Next stop was a screen with costumes from all the ancestor’s countries that make up me. I could choose a costume on the screen, wave my hand, and it took a picture of me, looking as if I were wearing that costume. These photos are sent to your email account automatically so you can save them.

Record my Story: The center offers two options for recording a story. You can go into a room and be taped while you are answering questions or you can come with many others, bring a thumb drive and be recorded together, talking about a story or describing a picture or whatever you’d like to do. It’s an easy way to tell your stories and get them recorded for your children.

Discover my Story: Here you can dock your iPad and find out how many other people in the country have your first name spelled just as you do. (It seems there are 7,918 other Maurine’s in the country). You can find out the population of the country the year you were born, the price of gasoline and who won the World Series. The price of a movie ticket was 46 cents the year I was born.

Experience My Story: What did the homes of your ancestors look like? One room shows a cabin that changes as you pull an arrow across a timeline from 1810 to 1890. Stories pull up that talk about the various items in the room. You can pull your own ancestors up, who then show on the screen in the cabin and see what a typical home may have looked like in their era.

A Tale of Two Sister Missionaries

A senior missionary, Elder Steve Orton, told us this story that happened last week. Sister Emily Hansen of McKinney, Texas was in the Discovery Center with Sister Valerie Christensen of Yakima, Washington. They knew nothing of each other’s backgrounds or histories, but both were sitting side by side at the large touch screens looking at their grandparents whose ancestral homes were in Denmark.

“As they each touched an ancestor, their individual stories popped up. One sister noted how her 4th great grandfather, Hans Hansen, had joined the Church in the 1850’s and then gone on an at-home mission in Denmark. The story was displayed right there on the screen in big letters, and she used her finger to scroll up and down as the life of Hans Hansen revealed itself.

“Meanwhile, the other sister was doing the same on her screen. “Hos fun,” each of them remarked. The second sister was scrolling through the life history of her 4th great grandfather, Peder Jensen, also from Denmark, when she encountered this paragraph:

‘One day as Peder worked in his shed threshing grain with a flail, two strangers came to him and introduced themselves as Mormon missionaries. They were both natives of Denmark and onverts to the new Latter-day Saints Church. Their names were Lars Swensen and Hans Hansen. The Jensen family became interested and every member joined the Church.’

This Discovery Center will be followed by a smaller version in Seattle and from these two facilities, the Church will learn how to replicate this elsewhere.. A similar center will be built in the Museum of the American Revolution in Philadelphia. Eventually pieces of this software will be available on computers for home use.

The Discovery Center will be opened from 9 a.m. to 9 p.m. every day except Sunday, but appointments need to be scheduled here.

Because we are so eager for everybody in our family to be excited about family history, we are planning to bring the whole family back.