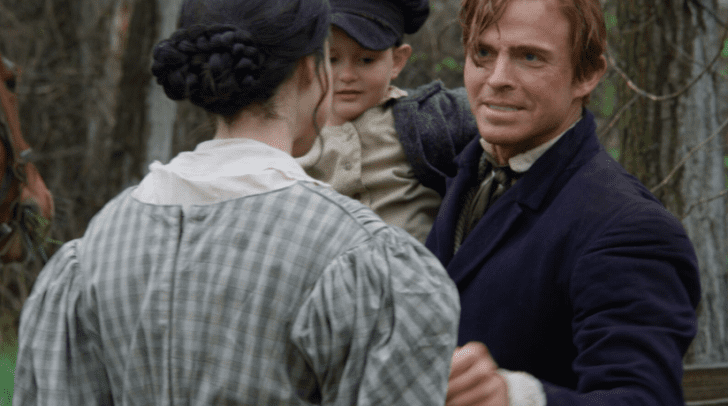 In the early 1840s, the mayor of Boston, Massachusetts, Josiah Quincy III, said about Joseph Smith, “Born in the lowest ranks of poverty, without book-learning and with the homeliest of all human names, he had made himself at the age of thirty-nine a power upon earth…. His influence, whether for good or for evil, is potent today, and the end is not yet.”

As Latter-day Saints we are captivated by the influence of Joseph Smith, but now in a stunning, new docu-drama, Joseph Smith, American Prophet produced and directed by Lee Groberg, millions more will come to know him through their PBS stations during October and November, with the first showing being on Oct. 1 on BYUtv.

Though Groberg produced a documentary with the same title that ran on a smaller number of PBS stations in 1999, this is an entirely new show with only a few elements remaining—the foremost being the narration by the late and noted actor Gregory Peck.

Groberg was at WETA, the grand daddy, second largest PBS station in the nation, pitching another documentary when he had the idea to suggest a remake of the Joseph Smith film, but still using Gregory Peck as the narrator. The executives at WETA were intrigued, and what originally was going to be a re-mastering of the older show in HD format, became instead an entirely new production.

What is different this time also has to do with the possibility for its wide distribution. WETA is self-syndicating this to the other PBS stations around the nation, which means its audience could be much more vast. WETA jumped on the suggestion of doing a new version of the Joseph Smith documentary and said it would be their goal to have a 95% carrying rate.

Incidentally, when Groberg pitched this film to WETA, they asked if this time they could see the golden plates as if they were locked away in a vault in Salt Lake City somewhere. Mark Goodman, the film co-director said, “You could just see the skepticism in their eyes, as if they saying ‘Right’, and it gave us a little bit of perspective as to what this story is to those who haven’t heard it before. In this day and age when so many people have heard about the Mormons, this film gives a whole new opportunity to them a story they know nothing about.

The docu-drama examines what it was about his remarkable life story that has inspired such impassioned rancor on one side and un-flinching reverence on the other. The film’s dramatizations are based on the accounts of Joseph Smith and those of his followers. It depicts his life, with context and analysis.

Joseph Smith’s founding religious activities are chronicled across New York, Ohio, Missouri and Illinois, along with their polarizing impact and controversial claims and doctrines, from the Book of Mormon to polygamy.

Members will find this a moving account and those who do not know Joseph Smith may find as Goodman, film said, “When I see a film about something, I want to turn immediately to the Internet to learn more and we suspect viewers will do the same. I came away from the film and I loved Joseph. I loved Hyrum. I loved Emma”, he said. “This is because we are able to put a face on these people. It is much more emotional than the first documentary.”

Groberg added, “I hope the viewer will come away with a better understanding of such topics as polygamy and religious toleration. Religious liberty is at the forefront of lots of discussion these days. We hope that when viewers see what happened to a religious group in 19th century America and how the government failed them, that they will better appreciate the plight of refugees and the importance of guaranteeing religious liberty. The LDS Church has experienced both in a profound way.”

He said, “There are some very touching scenes in this show, based primarily on journal entries. While we had the information before, now we get to live those scenes such as when Joseph is leaving for the Carthage Jail where he will be assassinated.

“Early on,” he said, “a descendent of Hyrum said, ‘Don’t lose sight of the closeness of this family.’ With that clarion call in our back pocket, we strived to show the family solidarity of the Smith’s with scenes like Joseph teaching his family out of the Bible and sharing stories with them about the ancient Book of Mormon people.”

Because Emma didn’t write a journal, we don’t have many of her firsthand words, but the combination of co-writers Heidi Swinton, who wrote the first documentary, and Mitch Davis, a film director noted for writing and directing five feature films , including The Other Side of Heaven, were able to create an engaging script that broadly includes Emma. Her pain, for instance, at the introduction of polygamy is portrayed masterfully in a scene that, at the same time, does not minimize Joseph Smith’s own struggle.

No matter how difficult polygamy was for Joseph, even in his closest relationships, he had already developed the will to obey God, no matter what it cost him.

Both Groberg and Goodman said that the cast and crew gave a consecrated effort. The actors extensively studied the people they portrayed—even those who had smaller parts. Emma had just lost twins, when Julie Murdock died in childbirth, giving birth to twins. John Murdock, who had no way to care for these twins, came and gave them to Joseph and Emma to rear. The man who played John Murdock in the docu-drama is only on for a few minutes, but his performance is very moving as he tears up at the loss.

Woven with the historical re-creations is commentary from ten scholars and historians both within and without the LDS faith including two Apostles. They represent Harvard University, Columbia University, Washington University, University of Illinois and George Mason University.

The scholars’ comments are intriguing, particularly those who are not LDS, because they give us a unique, learned, outsider’s perspective on Joseph Smith and his remarkable accomplishments. How does an unlearned, backwoods farmer start a movement that US News and World Report postulate will become 265 million members by 2080?

The late Robert V. Remini of the University of Illinois at Chicago said, “Do I personally believe? No. I have no evidence for that. And as a historian I must base my conclusion on that. However, you can say, look what he did! Is one human being capable of doing this without Divine help and intervention?”

Laurie F. Maffly-Kipp, professor and historian at the University of Washington said, “I find Joseph Smith a remarkable person. He had a charisma that is undeniable, I think, and had a vision for a community that was unlike anything else that’s ever been created.

“So, as a historian, I’m interested in how that comes about. How is it that certain people can gain that kind of affection and respect from other people and also the kind of denunciations he received at the same time?”

Richard T. Hughes, professor of American Religious History at Messiah University added, “If I believed, I obviously would become a Mormon. But having said that, if we want to understand a tradition, we’ve got to take seriously what the representatives of that tradition tell us. What do I think is the significance of all of these stories taken together? It’s the heart of the Latter-day Saint restoration. The concern to recover direct communion with God.”

John G. Turner historian at George Mason University said, “Joseph Smith was a nobody who became an unlikely figure of importance in American religious history. He was someone who came from an impoverished downwardly mobile family. He called on his followers to leave everything behind and gather together as a united people. A wonderful ideal. A demanding ideal. But very threatening to other Americans.”

What the 86 minutes of Joseph Smith, American Prophet does, according to Groberg, “is paint a picture of a man so convicted of a truth that he could not let go. I so respect the man for sticking by his guns. It is clear that he had a profound experience and continued to have them. I hope that viewers, both LDS and non-LDS will gain a greater respect for this remarkable prophet.”

To see a listing of the stations, dates and times where the film will play click here. https://www.josephsmithamericanprophet.com/ In addition, in November, the docu-drama will be available on a DVD that contains 106 minutes of bonus features including the extended interviews with the scholars.

The opportunity for your local PBS station to show this film at a good time slot will be increased if you call your local station and express your interest in seeing it.