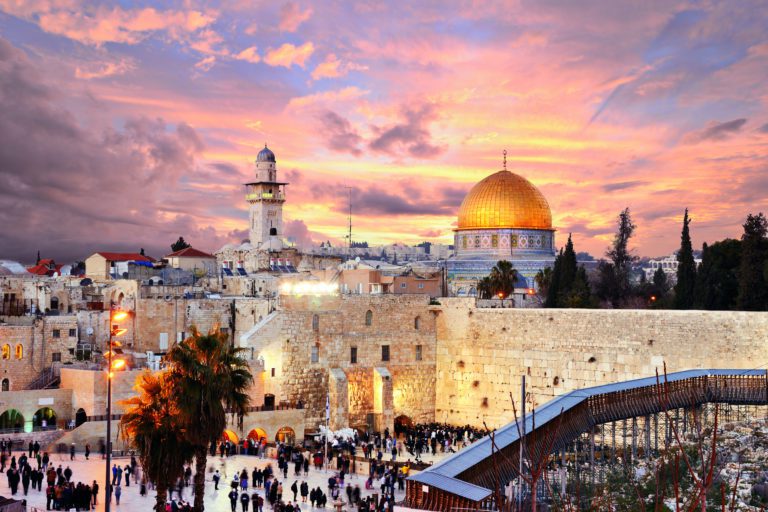 “The White House upended decades of U.S. policy on Wednesday when it left open the possibility that it might not use its veto in the United Nations Security Council to shield Israel from unfavorable resolutions, such as the creation of a Palestinian state.”

America has been Israel’s staunchest defender since that day in May of 1948 when, within 15 minutes of Israel’s declaration of independence, President Harry Truman extended formal diplomatic recognition to the newborn state. Although Israel won its war for independence without active military involvement by the West, defense materials and intelligence coordination have been hallmarks of the U.S.-Israel relationship from the 1950s forward.

As I watched this unfold over the years – the Six-Day War of 1967, the Yom Kippur War of 1973, the Camp David Accords of 1978, the two Intifadas, numerous peace-process negotiations – and America’s steadfastness, I often wondered about Zechariah’s prophecies:

“And in that day will I make Jerusalem a burdensome stone for all people: all that burden themselves with it shall be cut to pieces, though all the people of the earth be gathered together against it.”

“For I will gather all nations against Jerusalem to battle … Then shall the Lord go forth, and fight against those nations….”

When America has been Israel’s strong ally, and when this nation serves as the base of operations for the restored gospel, would the day really come when it would cast its lot with all the nations of the world and oppose Jerusalem?

It may have been a stretch a few years ago, but not since Barack Obama and Benjamin Netanyahu entered the ring.

The two have starkly different worldviews, especially who is the villain and who is the victim, what diplomacy can and cannot solve, the viability of a two-nation solution between Palestinians and Israelis, and when to use military power – all punctuated with a personal animosity U.S. presidents have usually reserved only for the Hitlers of the world.

And now the not-so-veiled threat to withhold the one tool the United States has employed scores of times to guard Israel against the powers of the United Nations, stacked with enemies as it is.

If you think the Palestinian Authority’s attempt to join the International Court of Justice and file war-crime charges against Israel will cause mischief, wait until the next time the U.S. would normally veto an anti-Israel resolution before the Security Council, and Ambassador Samantha Power takes a walk.

I am not saying we are about to witness a final ramp-up to those last-day events amply prophesied, but one thing is certain: Before the Savior ushers in the Millennium, Jerusalem (and by inference the state of Israel) must stand alone against the world. It must be surrounded by enemies and held under siege for 42 months (perhaps the number is metaphorical, but the point of abject isolation remains nonetheless). The residents of Jerusalem will come to realize that no other power on earth will fight for it. They must be brought to know that only the Messiah can save them. They will not be able to say, “We could have handled it.”

In the months ahead, Netanyahu and Obama, such close buddies that they are, may do more to help the Lord hasten His work than we realize.

Gary Lawrence’s recent book “The War in Heaven Continues” is available at Deseret Book, Ensign Books and Amazon, and also on Kindle.

Isaiah also had something to say about the relationship of America and Israel prior to the time when Israel is left alone to defend herself: “13 The envy also of Ephraim shall depart, and the adversaries of Judah shall be cut off: Ephraim shall not envy Judah, and Judah shall not vex Ephraim. 14 But they shall fly upon the shoulders of the Philistines toward the west; they shall spoil them of the east together: they shall lay their hand upon Edom and Moab; and the children of Ammon shall obey them.” (Isaiah 11:13-14) This is obviously pre-Millennial and has not yet occurred. The Philistines are Gaza and Lebanon. Edom and Moab are modern Jordan. The stage is set for this to play out I spite of Barak Obama. Congress has put Obama in check by threatening to cut off all funding to the UN if Obama abandons Israel in the Security Council.