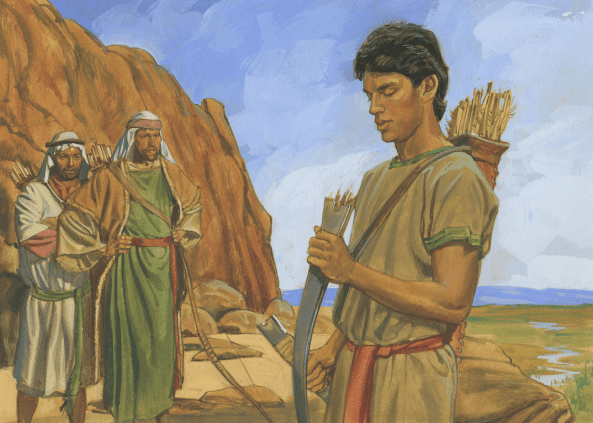 With backgrounds so much in common, why did Laman and Nephi have such divergent outcomes? While Laman was the oldest and Nephi the youngest, both were raised with righteous parents including a father who would become a prophet. When confronted with inconvenient prophetic direction Laman murmurs, and argues bitterly with verbal attacks. While reacting quietly with hardened heart, Nephi retreats to solitude for personal revelatory softening.[i]

In the context of Lehi’s dream it would be easy to assume that while Nephi hiked to the tree for a fruit experience, Laman would have headed directly for the great and spacious building representing the vain imaginations and the pride of the world. But Lehi only says that in his dream, Laman never ate the fruit, without explaining why.

Perhaps by “window shopping” their shared experiences we could expose something more personally applicable than birth constellation? Even before arriving in the promised land, the divergent paths they choose to walk from common origins, reveal dramatically different destinations.

For example, when given the opportunity to witness the hand of the Lord in getting the plates from Laban, Laman sees an angel, is humbled but remains doubtful,[ii] while Nephi, resulting from the softened heart and a new vision about his own divine definition, has problem solving and miraculous Spirit-guided experiences filling him with joy.[iii]

Then, after successfully persuading the daughters of Ismael, Laman again murmurs, resorts to violence, but is then humbled and apologizes.[iv] Nephi again experiences the miraculous, faith-initiated power of God’s deliverance.[v]

When Lehi recounts his Tree of Life dream, Laman spends the next few days arguing over the meaning and implications. He remains confused and then is humbled by Nephi’s instruction.[vi] Nephi, on the other hand, seeks divine interpretation and is provided a powerful view of the future[vii] as given to most prophets from Enoch[viii] and Moses[ix] to Peter[x] and Joseph Smith.

Their divergent characters are again manifest with the reception of the Liahona, a family food crisis following the breaking of Nephi’s bow, and the subsequent death of Ishmael. Laman reacts, while Nephi is both pro-active and responsive with solution-thinking. It is only the divine voice from the heavens that brings Laman from murderous intent to humility and submissiveness… still, a reactive response.[xi]

This reactiveness finds Laman, over the next several chapters, including the eight years in the wilderness and the boat building confrontations, ranging from murmuring, rejoicing in another’s sorrows, murder lust, and finally humility by compulsion. All-the-while, Nephi is continually problem-solving, receiving detailed revelation, and being filled with the Spirit.[xii]

Finally, after settling into a maritime routine, Laman and his group follow a patterned sequence many still repeat today: A desire for FUN escalating to CELEBRATION which grows in RUDENESS -> UNTHANKFUL FORGETFULLNESS -> VIOLENCE -> JUSTIFICATION TO SAVE FACE -> BLAME -> DESENSITIZATION. It is only by the severest threat to his life from the storm that Laman backs down. Nephi in crescendoing differentiation from his brother, even in the face of severe physical suffering, is patient, prayerful, submissive, and forgiving.

Which outcome do we desire and what caused the divergence? It evidently wasn’t differing experiences but certainly differing paradigms. Why, triggered by what difference? Returning to Lehi’s dream could we find this differentiating factor in the lives of these two brothers and prophet’s sons.

Through modern eyes, what if Lehi’s dream were seen as an episode of American Ninja Warrior with all of its hazards and tests? A bird’s eye overview of the course would reveal two contestant-preferred destinations: a great and spacious building filled with those in the latest fashion; and a beautiful tree with delicious white fruit. However, those at the tree, seem divided, in fact some are walking away from the tree after eating the fruit??? The reveal is that only one destination turns out to be the qualifying goal.

The landscape features include:

It almost seems too easy for a Ninja Warrior course were it not for the hazards. They include:

As the camera pans the course, we see four different contestant groups seemingly vying for their chosen destinations in order to qualify for the final round.

After seeing with your own eyes, the choices, hazards, successes and failures, you are about to be left to face the course yourself. Which destination will you choose? That fourth group seemed so happy and even unaffected by those mocking in the building. But those on the elevated balconies seemed to have it all, even if they spent most of their time just competing for a higher balcony or finer clothing. Competition is half the fun…fun is happiness, right!? The first and second groups were obviously to be avoided… or, and unless helping the lost was the secret to qualifying rather than vying for a higher balcony or just arriving at the tree and eating the fruit. hmmm?? There’s the signal…it is your turn…ready, go!

Wait! How was that supposed to help us know what caused the difference between Nephi and Laman? Ah, in looking at the dream, perhaps we need to think more with a Hebrew mind. The dream, interestingly begins and ends with the same comparison we’ve been searching to understand: Nephi at the beginning and Laman at the end.

The chiastic center is made up of two verses that contain all the positive symbols – see G above. Then noting that Lehi’s family story is in the first half, A-F; while the four-group world-view is in the second half, f-a. Starting with the center G and expanding to F-f; it is easy to find Laman and Lemuel with their matching group, one that professed interest in the path leading to the tree (Christ), but then omitted or even refused to hold to the rod. Is it possible that while growing up, Laman ditched synagogue and scripture study? Since the rod symbolizes “the word of God” or the scriptures, it is easy to understand his struggle. The use of iron rather than gold, silver, or crystal is telling. Iron is firm and stable but looks ancient, can weather so as to get rough and rusty. Though the surface may seem antique and hence out of date, and to hold to it may seem rough and often difficult, its trustworthiness is assured and strong. But an unwise, self-absorbed son of a wealthy business man may see no relevance in the scriptures and make unwise choices that like Elder Uchtdorf’s plane[xiii], may start with what at first is just a small deviation but consequently arrives miles and miles from any desired destination. It certainly would explain why Laman “knew not the mind of God”[xiv] while Nephi “delighted in the scriptures” and “pondered them continually.”[xv]

OK Ninja Warrior, so now you are ready for the course! Which destination can you afford with your time currency? Oh, be careful to note, that if you choose the tree, eating the fruit is not the end but the beginning!

[xiii] President Dieter F. Uchtdorf, Conference 2008; In 1979 a large passenger jet with 257 people on board left New Zealand for a sightseeing flight to Antarctica and back. Unknown to the pilots, however, someone had modified the flight coordinates by a mere two degrees. This error placed the aircraft 28 miles (45 km) to the east of where the pilots assumed they were. As they approached Antarctica, the pilots descended to a lower altitude to give the passengers a better look at the landscape. Although both were experienced pilots, neither had made this particular flight before, and they had no way of knowing that the incorrect coordinates had placed them directly in the path of Mount Erebus, an active volcano that rises from the frozen landscape to a height of more than 12,000 feet (3,700 m).

As the pilots flew onward, the white of the snow and ice covering the volcano blended with the white of the clouds above, making it appear as though they were flying over flat ground. By the time the instruments sounded the warning that the ground was rising fast toward them, it was too late. The airplane crashed into the side of the volcano, killing everyone on board.

It was a terrible tragedy brought on by a minor error—a matter of only a few degrees.

[xiv] 1 Nephi 2:12 And thus Laman and Lemuel, being the eldest, did murmur against their father. And they did murmur because they knew not the dealings of that God who had created them.

see also Moses 4:6 6 And Satan…sought also to beguile Eve, for he knew not the mind of God…