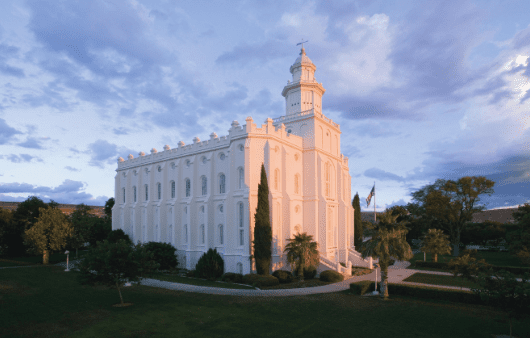 Mormon’s description of Captain Moroni is breathtaking. Mormon, who lead Nephite armies for over 50 years, regarded his predecessor with wonder. But after telling us the damage Moroni-like men could do to the powers of hell, Mormon speaks of other, lesser-lights, and tells us that they were “no less serviceable unto the people.” (See Alma 48:16-19) As we learn lessons from the past, we must not neglect the instruction that comes to us from those quiet, nearly unnoticed Saints whose efforts shaped the Kingdom. In April Conference of 2000, Elder Holland spoke of two such individuals. One of them was Peter Neilsen.

As a young man of Primary and Aaronic Priesthood age, I attended church in the grand old St. George Tabernacle, construction for which had begun in 1863. During very lengthy sermons I would amuse myself by gazing about the building, admiring the marvelous pioneer craftsmanship that had built that striking facility. Did you know, by the way, that there are 184 clusters of grapes carved into the ceiling cornice of that building? (Some of those sermons were really long!) But most of all I enjoyed counting the window panes–2,244 of them–because I grew up on the story of Peter Neilson, one of those little-noted and now-forgotten Saints of whom we have been speaking.

In the course of constructing that tabernacle, the local brethren ordered the glass for the windows from New York and had it shipped around the cape to California. But a bill of $800 was due and payable before the panes could be picked up and delivered to St. George. Brother David H. Cannon, later to preside over the St. George Temple being built at the same time, was charged with the responsibility of raising the needed funds. After painstaking effort, the entire community, giving virtually everything they had to these two monumental building projects, had been able to come up with only $200 cash. On sheer faith Brother Cannon committed a team of freighters to prepare to leave for California to get the glass. He continued to pray that the enormous balance of $600 would somehow be forthcoming before their departure.

Living in nearby Washington, Utah, was Peter Neilson, a Danish immigrant who had been saving for years to add on to his modest two-room adobe home. On the eve of the freighters’ departure for California, Peter spent a sleepless night in that tiny little house. He thought of his conversion in far-off Denmark and his subsequent gathering with the Saints in America. After coming west he had settled and struggled to make a living in Sanpete. And then, just as some prosperity seemed imminent there, he answered the call to uproot and go to the Cotton Mission, bolstering the pathetic and sagging efforts of the alkali-soiled, malaria-plagued, flood-bedeviled settlers of Dixie. As he lay in bed that night contemplating his years in the Church, he weighed the sacrifices asked of him against the wonderful blessings he had received. Somewhere in those private hours he made a decision.

Some say it was a dream, others say an impression, still others simply a call to duty. However the direction came, Peter Neilson arose before dawn on the morning the teams were to leave for California. With only a candle and the light of the gospel to aid him, Peter brought out of a secret hiding place $600 in gold coins–half eagles, eagles, and double eagles. His wife, Karen, aroused by the predawn bustling, asked why he was up so early. He said only that he had to walk quickly the seven miles to St. George.

As the first light of morning fell on the beautiful red cliffs of southern Utah, a knock came at David H. Cannon’s door. There stood Peter Neilson, holding a red bandanna which sagged under the weight it carried. “Good morning, David,” said Peter. “I hope I am not too late. You will know what to do with this money.”

With that he turned on his heel and retraced his steps back to Washington, back to a faithful and unquestioning wife, and back to a small two-room adobe house that remained just two rooms for the rest of his life. (Ensign, May 2000, p. 76)

How ironic that I JUST (the day before Pioneer Day) found out I have an ancestor who was called to the Cotton Mission as well. Francis Boggs was in the Vanguard Company with Brigham Young that traveled from Winter Quarters to settle the Salt Lake Valley. Three years later, he moved his family to Springville. He then answered a call to Parowan (I believe it was called the "Iron Mission), then served a mission in Las Vegas because Brigham Young wanted to build a way station between San Bernardino and St. George. When he returned to his family, he was called to the "Cotton Mission" and settled in Washington, Utah. I'm sure Peter Neilson must have been a neighbor. Had I not just done this research, I wouldn't have known about any of the hardships and adventures of my ancestors in this branch of the family tree. Thanks for writing your article.

In todays money this amount of gold would amount to $75,000 dollars. Who could save such a sum and then give to pay for glass? Some have a faith beyond the realms of this world.