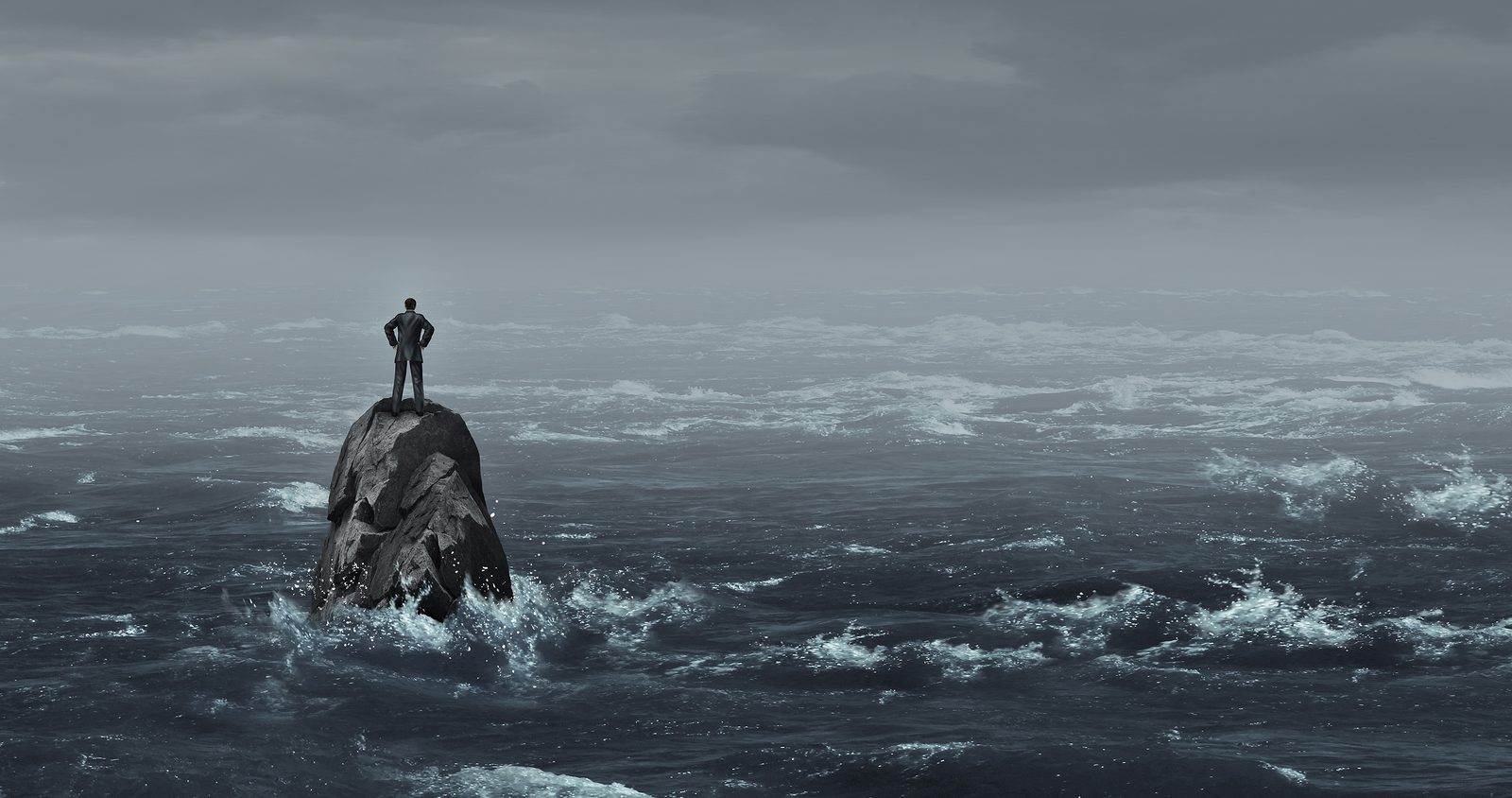 The Grocery Store Race for the Last Gallon of Milk

People of a certain age—say over 50—can still remember the days of driving up to a gas station and having a uniformed attendant run out to fill up the car.  He would also ask the driver, “Check your oil”? Then the attendant would open the car hood, pull out the calibrated dipstick submerged in the oil, wipe it off, plunge it back into the oil again for a clean reading, then pull it out to measure how far the oil went up the stick.

“You’re about a quart low,” he might say, and then the driver would decide if he wanted to add more oil right there on the spot.

After a recent run to buy water, chocolate, antibacterial wipes, more chocolate, and paper towels in preparation for a possible shelter-in-place scenario, I kept thinking of the Parable of the Ten Virgins.   Only five came prepared with oil in vessels with their lamps to meet the bridegroom.  The other five did not, and their lamps eventually went out, but no attendant came running out to refill them. They had to leave to buy more, and while they were gone, the bridegroom came suddenly. Only those who were at the door and prepared when he opened it were allowed to go in with him.

As I was putting my items away, I sat on the paper towels to consider my spiritual pantry.  Was I still being faithful to a pledge I made years ago about never letting it get too low again?

It was a time when we were living in Houston, where the bayous used to overflow after any heavy rain. The world saw that at its worst recently when hurricane Harvey hit Houston.  But in August of 1983, a category 3 hurricane named Alicia also made its way up to the city.

This storm was no Harvey, but it created the kind of run on the stores we’re seeing now. In the days before it hit, I was watching news reports that said It might come–It might turn–It might be bad–It might not.  My husband was out of town, and I had two little ones, aged 3 and 15 months.  I hadn’t stocked food storage or emergency supplies, and as I watched the TV, I kept thinking I probably should go get some milk and bread, maybe some more batteries.  And where was my flashlight?

But by the time I actually moved, got the kids dressed, buckled in and out of those old stroller and car seats, into the store, and into the shopping cart—so had everyone else in Houston.  Some shelves were already bare, but I found a few batteries and diapers.   People were trying to stay calm, but the anxiety was palpable.

Milk, I thought.  I’ve got little ones and I’ve got to have fresh milk.  (I did not know about keeping a supply of powdered milk.)  In the crazy hope there might still be some left, I made a beeline to the dairy case.  As I did, I felt another cart beside me, but I didn’t look over. I just slightly stepped up my pace—and so did the other shopper.  Soon we were in a sprint to the milk case.  I was determined to get that milk.  I reached the case first and took out the very last gallon of milk, but as I put it into my cart, I heard a man’s voice say, “Well, son, looks like we missed that one.  Let’s go try another store.”

Only then did I look over and see a man with his young son, about eight years old.  Only then did I notice the man had braces on his legs.  I had just hotfooted it down a grocery aisle against a man with braces–to get a carton of milk?

But that’s not the worst of it.  I didn’t say, “Oh, you take it.”  I didn’t give him the opportunity to look at my kids and graciously say in front of his son, “No, you have it.”  At least then we both could have felt better.   Instead, I kept it and slunk away. By the time I had gone down another aisle, I felt so heartsick and guilty, I went back to find the man and give him the container.  But he was gone.  I weaved through every aisle trying to find him, to free myself of the milk that seemed to get heavier and heavier in the cart–but I never saw him again.

That was 37 years ago and I still see the faces of that man and boy and feel ashamed.  At first, I tried to assuage my guilt by telling myself I was caught between two very difficult choices—the needs of my family and someone else’s.   But that doesn’t get to the heart of what really happened. That particular situation revealed a side of me that I didn’t know existed.  I had no idea I could react so viscerally and mother-bearish, with little regard for other mothers or fathers and their cubs.  I had no previous experience with the overwhelming power of the instinct to survive, a sensation so primal and deep that its grip scared me more than the hurricane.  I realized that in the future, I would need a lot of oil in my lamp to deal with that kind of power.  (When 9-11 happened 18 years later, I recognized “survival mode,” but I was still impressed by its intensity.)

We drove home as the rain started.  The kids wouldn’t sleep in the bathroom, which was supposed to be safer, so I pulled the younger one’s crib into the hallway away from the windows and slept fitfully nearby with my other daughter.  As long as I had lights, TV, and telephone in this era before cell phones and internet, I felt OK.  But around 4 a.m., I turned on the TV to hear a reporter saying tornadoes were “roaming at will”—and then the power went out.   I was suddenly alone in the dark with my children, cut off from the outside world as violent gusts of winds rattled the windows and my nerves.  I was so glad for a flashlight, and as the eye of the storm passed over, its eerie glow revealed contorted trees.

But in those uncertain hours, no amount of hand sanitizers and toilet paper could have comforted me.  It was the spiritual oil in my lamp that calmed my troubled heart as the Holy Spirit guided me through the dark and helped me prayerfully turn our lives over to the Lord.  I had just enough oil in my lamp to get me to daybreak.

The irony is that the power stayed out for five sweltering days, and my precious milk of shame, plus everything in the refrigerator spoiled and drained out over the floor.  Trash pick-up was disrupted and rats, snakes, and insects seemed to appear out of nowhere.  I mentioned only a little of this in my journal of the time because it was just too overwhelming, but I learned five lessons from that emergency experience:

I determined to fortify my faith with knowledge, prayer, and service to tap into the peace that passes all understanding and better withstand the swirling winds of future storms –physical, spiritual, emotional.  I wanted to develop a relationship with Christ so I could more readily trust him, choose the right, and know how to help those around me.  And I wanted to know in my soul that milk or no milk, all is well.  I’m still working on it.

In a 2005 conference address about spiritual preparedness, Elder Henry B. Eyring seemed to define the person I wanted to become:

So, the great test of life is to see whether we will hearken to and obey God’s commands in the midst of the storms of life.  It is not to endure storms, but to choose the right while they rage.

Church leaders have been telling us for years to prepare, but there’s a greater emphasis now on assuming more responsibility for our own spiritual welfare: do more Gospel study at home, teach our children about God and Jesus Christ, deepen our testimonies, and pray over everything.

But part of that spiritual preparation is also becoming more engaged in bringing others to Christ, to help in the gathering of Israel.  All around us are those who would come if they were invited or who see our examples of love, sharing, and inclusion and want to know more.  Just this week, I’ve had opportunities to show I’ve learned from the milk incident.  When I was buying my supplies at a grocery store, a woman hesitantly asked me, “Do you know what to do?”  I started helping her think through what she might need, and others heard us and came over to listen.  Soon I was leading a little crowd around the aisles, and while I’m no guru on food and sanitation storage, I realized that all those years of Relief Society homemaking lessons had taught me something I could share with others.  Then the manager came over, and when she heard I had created an emergency list for my grown children, she asked for a copy.  I sent her one, complete with quotes like this:

Let us be in a position so we are able to not only feed ourselves through the home production and storage, but others as well.

This is how we help put oil in our lamps.  We have been invited to come to the Savior, but how will we recognize him unless we know him through our personal experience of living the Gospel—all the right and wrong choices we made and what we learned from them?  How will we know him unless we’ve served his children on this earth?  We are standing at the door like those ten virgins, waiting on the bridegroom—Christ—to open the door.  Have we checked our oil?   If our testimonies are flagging, we need to decide what to do about it because no one else can. A prophet has explained:

In our lives the oil of preparedness is accumulated drop by drop in righteous living.

If we come to know the Savior by sincerely trying to become like him, we will be prepared to meet him.  His desire is that we all areprepared when He opens the door, and that we all are able to enter and be welcomed into His presence.

At this time of topping off our pantries, can we find the cash to buy a couple of extra cans to donate to the local homeless shelter or food pantry? When saw we thee we a hungered?

When Questions Seem to Exceed Answers