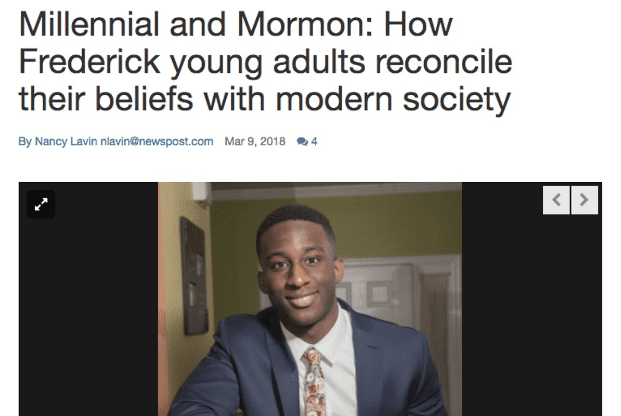 The Frederick News-Post recently published an article which featured many Maryland LDS young adults in a conversation about “maintaining and practicing their beliefs despite influences in modern society.”

The article is the first in a series from the publication about young adults who actively participate in organized religion despite a downward trend in religious participation from others in their age group.

A discussion about LDS views on repentance and forgiveness opens the article. Ari Hernandez, 20, wasn’t ostracized from his family or the church for breaking the Law of Chastity and Word of Wisdom, the author wrote, “Instead, he described the welcoming nature with which he was forgiven and accepted back — by fellow Mormons and more importantly, by God.”

The author described her impressions at an LDS sacrament meeting in which Moroni Okonah, 18, spoke with conviction and intensity in a talk he gave before leaving for a full-time mission to California.

“Clad in a suit and tie, Okonah exuded a confidence beyond his 18 years as he stepped up to the lectern during a recent sacrament meeting at the Frederick chapel,” the article’s author, Nancy Lavin, wrote. “His faith was evident in the words he spoke to the congregation, referencing passages from the prophet Moroni, for whom he is named, in the Book of Mormon.”

Other young single adults shared their experiences with answering common questions about Mormons — including polygamy, Joseph Smith and garments — and their thoughts on finding an eternal spouse. Jade Spencer, 26, talked about the benefits she has found to surrounding herself with peers of other faiths.