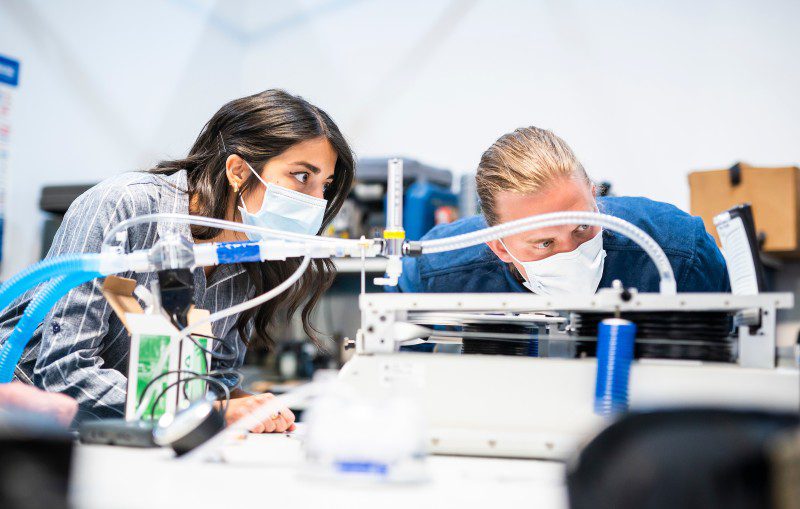 Eight years ago, a group of BYU engineering students started a project to create a neonatal ventilator for premature babies born in third-world countries. Today, several iterations later, that original idea has been reengineered as an affordable adult ventilator that just received FDA emergency authorization for use in hospitals during the COVID-19 pandemic.

Thanks to the work of BYU alums Kindall and Erica Palmer, along with current and former BYU students, the AdultLife Ventilator is just as effective as high-end units, but comes at a fraction of the cost. It’s a fully-functional ventilator that provides respiratory support to patients with pneumonia, acute respiratory distress syndrome and other complications caused by COVID-19.

“We’ve been working with respiratory therapists at the hospital and other doctors and every single time we go, they say, ‘we need this ventilator built yesterday,’” said AdultLife team member Andy Armstrong, a current BYU grad student in mechanical engineering.

Originally designed for infants in developing countries, the ventilator is compact, lightweight, durable and low cost. Now adapted for adult use, it features a built-in air pump so it can be used outside a hospital (where there is no pressurized air) and a battery-operated option. These unique features distinguish it from other units and make especially useful for handling overflow COVID-19 patients.

Neonatal Rescue ( neonatalrescue.org), the organization started by the BYU alums, is able to make the ventilator for substantially lower than current ventilator market prices that range from $10,000 to $50,000. In addition to the low cost, the manufacturing time for these ventilators is very short. After the first month of producing 500, the organization will be scaling up to making 5,000 ventilators a month.

Many organizations are interested in the low-cost, mass-producible ventilator: Neonatal Rescue is already working with the World Health Organization, the Department of Defense, the Federal Emergency Management Agency and various hospital chains. The team is working with ATL Technology, a medical manufacturing firm in Springville, Utah, to produce the ventilators. They worked with local respiratory therapists and doctors to achieve compliance with FDA standards.

“We harnessed expertise from engineering and medical experts to know exactly how the device needs to function and how you would train users,” Kindall Palmer said. “Ventilation is the core treatment for COVID-19, but there’s a severe lack of ventilators, not just in the United States, but in throughout the world. We hope to be part of the solution.”

Neonatal Rescue submitted their AdultLife Ventilator for FDA emergency use authorization in April, along with other major medical device manufacturers like GE Health and Philips. Now with official emergency FDA approval, ventilator manufacturing has increased, and the devices are in the process of being distributed to hospitals and organizations in need.

While wanting to help others, husband and wife Kindall and Erica Palmer never expected their ventilators to be making an impact during a worldwide pandemic. The project originally started as a BYU Engineering Capstone project to create a rudimentary neonatal ventilator. The Ballard Center bought the rights to the device and held a $100,000 NeoNatal Competition to find a team that would complete needed engineering changes and could guide the new product through FDA approval. The goal was to distribute the ventilators to developing economies at a very low cost.

After winning the competition, Neonatal Rescue created multiple versions of the neonatal device and tested in Cambodia and Uganda. Their humanitarian work around the world has impacted and improved many lives. Now their ventilators are not only saving babies, but they are saving individuals of all ages.

“I’m so grateful that we have learned everything we’ve learned to be able to put us in a position today to respond to COVID-19,” Erica Palmer said.