Lessons from the Restoration: Paying the Price to Know God | Meridian Magazine 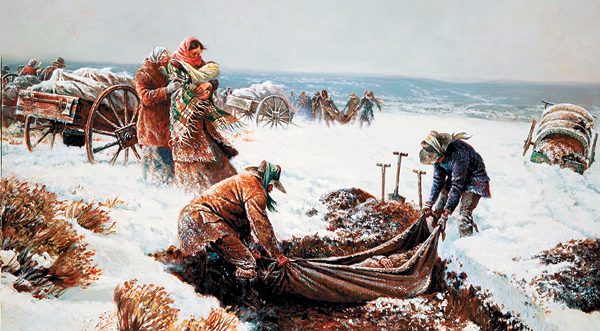 Lessons from the Restoration: Paying the Price to Know God

The frequently repeated story below is a beautiful testament of the gentle and continuing concern of the Father for his children.  He may give us the bread of adversity and the water of affliction to help us grow, but he will never forget us.

But Zion said, The LORD hath forsaken me, and my Lord hath forgotten me. Can a woman forget her sucking child, that she should not have compassion on the son of her womb? yea, they may forget, yet will I not forget thee. Behold, I have graven thee upon the palms of my hands; thy walls are continually before me. (Isaiah 21:14-16)

I am certain that there were those in the handcart companies stranded on the snowy plains of Wyoming that wondered if he had forgotten.  But most knew that he had not.

Of all the illustrations of faith in the Lord, few stories are more powerful than that told of the pioneer who years later stood to defend the decision of the Martin Handcart Company to start for the Salt Lake Valley late in the year of 1856. He had been one of the nearly 3,000 Saints who walked from Iowa and Nebraska to Utah between 1856 and 1860 in one of 10 companies pushing and pulling handcarts loaded with their belongings.

In a Sunday School class there was sharp criticism of the ill-fated Martin and Willie Handcart Companies, which met with tragedy because of their late start on the trek to the Salt Lake Valley.

An elderly man arose and said: “I ask you to stop this criticism. You are discussing a matter you know nothing about. Cold historic facts … give no proper interpretation of the questions involved. Mistake to send the Handcart Company out so late in the season? Yes. But I was in that company and my wife … too. We suffered beyond anything you can imagine and many died of exposure and starvation, but … we became acquainted with [God] in our extrem[i]ties.

“I have pulled my handcart when I was so weak and weary from illness and lack of food that I could hardly put one foot ahead of the other. I have looked ahead and seen a patch of sand or a hill slope and I have said, I can go that far and there I must give up, for I cannot pull the load through it. … I have gone on to that sand and when I reached it, the cart began pushing me. I have looked back many times to see who was pushing my cart, but my eyes saw no one. I knew then that the angels of God were there.

“Was I sorry that I chose to come by handcart? No. Neither then nor any minute of my life since. The price we paid to become acquainted with God was a privilege to pay, and I am thankful that I was privileged to come in the Martin Handcart Company” (as quoted in David O. McKay, “Pioneer Women,” The Relief Society Magazine, Jan. 1948, 8; cited in Robert L. Backman, “Faith in Every Footstep,” Ensign,Jan. 1997, 8)

Fraancis Webster, the old man, prepared himself in word and action for the spiritual blessings he received. Others suffered just as much but, without his willingness to give, became disaffected and eventually left the church. There's an excellent BYU Studies article about him. https://byustudies.byu.edu/content/francis-webster-unique-story-one-handcart-pioneers-faith-and-sacrifice