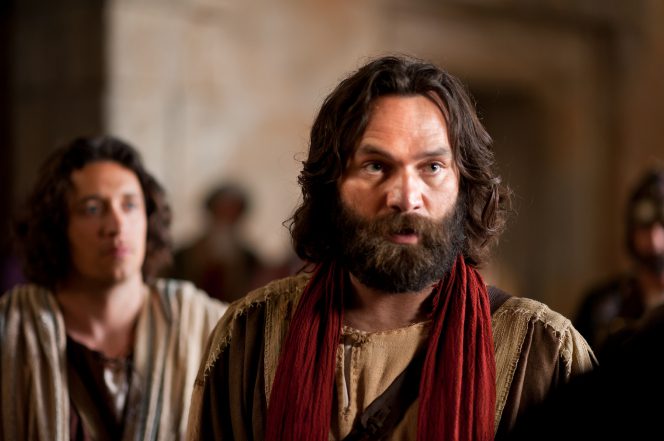 Lesson 45: “He That Overcometh Shall Inherit All Things”

The Setting of the Revelation

We learn from Doctrine & Covenants 7 about John’s unusual request of the Lord. The Savior said to him, “John, my beloved, what desirest thou? For if you shall ask what you will, it shall be granted unto you.” John answered with the wish of his heart, “Lord, give unto me power over death, that I may live and bring souls unto thee.” His desire was granted. John was allowed to tarry the Savior said, “until I come in my glory, and shall prophesy before nations, kindreds, tongues and people.”

It is this beloved apostle, so valiant in his testimony, who received the compelling, mysterious, and sweeping vision which he recorded as the book of Revelation. The revelation came while John was serving time in a penal colony on the isle of Patmos, a rough volcanic island southwest of the Turkish city of Ephesus. His crime was declaring “the word of God, and for the testimony of Jesus Christ” (Rev. 1:9). Though we don’t know exactly the time frame this revelation was received, most scholars point to the 60’s or the 90’s, as these were periods when harassment and persecution of Christians flared. In the 60’s’ Nero fired his persecution and in the 90’s Domitian incited and empire wide pogrom against Christians.

In either time period, the Saints were discouraged, trembling, and frightened, and were facing the greatest crisis the church had known. As Richard D. Draper notes in his book Opening the Seven Seals, “The ordeal through which they were passing had terrifying prospects. Rome, the seemingly omnipotent master of their world, had determined that holding to the Christian faith constituted a crime worthy of death. The churches in Asia already knew the effect of that brutal decision. Many undoubtedly wondered how a few powerless Christians could survive against the Latin colossus.

“At the time John wrote Revelation, a power struggle raged within the Christian community,” Draper tells us. “John wrote his book for those who yet clung to the truth. He warned against false prophets and their source of inspiration, and emphasized that God would not allow them to continue without consequence…Thus, the focus of Revelation—the core around which everything revolves—centers on the issue of authority. Who really overmasters the world? Is it the political institutions? the powers of evil? or God? Revelation makes it clear as the history of the world unrolls in its chapters. Satan will have his little day, but God and his forces will ultimately triumph.

“Some have viewed John’s intent as nothing more than keeping the Saints in line by holding out the promise of eternal reward,” Draper says. “But John’s aim seems far more noble. It is true that the course of history he presents stressed the ultimate, rather than the immediate triumph of goodness over evil, and yet the call was for the Saints to work out their salvation in the present and to place their trust in God who was not yet ready to expose his mastery over history. Triumph was not immediately at hand. The Saints had to exercise faith through a hope that made no demands upon the present. They could not escape history.”(1)

In the midst of his Sabbath meditations, John was visited by a radiant being who signified to him (which means gave him a sign) that he was an authentic messenger from God. What followed were specific instructions to the seven churches of Asia as well as a panoramic vision that swept through the course of the history of the earth and culminated in God’s eventual triumph. Other prophets have seen comprehensive visions of the earth’s history. We know that Moses did, as well as Enoch, and the brother of Jared.

Nephi was caught away in a vision, saw the entire history of the world, and like others before him was forbidden to write it down. He was told specifically that this was because it was the stewardship of John to chronicle this vision:

“The angel spake unto me, saying: Look! And I looked and beheld a man, and he was dressed in a white robe. And the angel said unto me: Behold one of the twelve apostles of the Lamb. Behold, he shall see and write the remainder of these things; yea, and also many things which have been. And he shall also write concerning the end of the world…

The Challenges in Revelation

With its sometimes confusing images and strange beasts, Revelation is a difficult book at first to understand. Certain parts of if remain mysterious even to gospel scholars. “It is not,” as Draper says, “a book for the spiritual novice.”(2) Yet, Joseph Smith called it “one of the plainest books God ever caused to be written.”(3) God does not seek to conceal the future from his Saints who will study his word, In fact, promises are repeated like this one in the Doctrine & Covenants:

When Elder Bruce R. McConkie was asked if were meant to understand the book of Revelation, he answered:

“Certainly. Why else did the Lord reveal it? The common notion that it deals with beasts and plagues and mysterious symbolisms that cannot be understood is just not true. It is so far overstated that it gives an entirely erroneous feeling about this portion of revealed truth. Most of the book—and it is no problem to count the verses so included—is clear and plain and should be understood by the Lord’s people. Certain parts are not clear and are not understood by us—which, however, does not mean that we could not understand them if we would grow in faith as we should. The Lord expects us to seek wisdom, to ponder his revealed truths, and to gain a knowledge of them by the power of the Spirit.”(4)

The Use of Symbol

God uses the language of symbols to communicate to his children. Because they enable us to give visual and conceptual form to ideas that otherwise may be too difficult to grasp, they are the language of scriptures and revelation. Sometimes symbols are clear and easy to understand; sometimes they are more difficult, because they can be understood on many levels. Either way, they are a beautiful part of the way we come to understand God’s messages for us here in mortality.

In the chapters discussed in this lesson, several fascinating symbols are used. John sees seven candlesticks, representing the seven churches of Asia. This image reminds us of the seven-branched lamp called a menorah used in the temple. Though each lamp has its own base here, we can still assume that the idea of temple is closely linked. Candles are an interesting image because they give off light which relieves the darkness, but they do not create the light themselves. They have to receive their light from another source, and that source is “one like unto the Son of Man” (Revelation 1:13) who stands in their midst. The Son of Man, of course, is Christ. He is the Son of the Man of Holiness, who is God. Several times in scripture the phrase “like unto the Son of Man” is used as a definite reference to Jesus Christ.

Out of the Lord’s mouth comes a sharp, two-edged sword. Richard Draper notes, “The symbolism goes back to Isaiah 11:4—”he shall smite the earth with the rod of his mouth” the Septuagint replaces “rod” with “word”)—and 49:2-“he hath made my mouth like a sharp sword.” Either sword is an excellent symbol for the executive and judicial powers of God: that which severs, cuts, opens, and reveals. But what John seems to portray in particular is the word of God which “quick and powerful, sharper than a two-edged sword, to the dividing asunder of the joints and marrow, soul and spirit; and is a discerner of the thoughts and intents of the heart” (D&C 33:1)