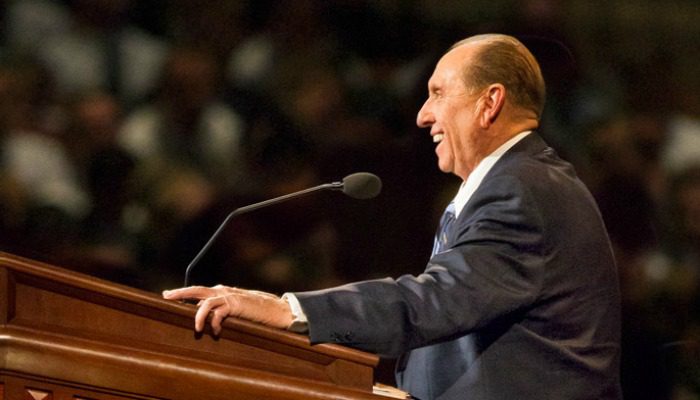 Although all of us could see that President Monson was struggling to finish his talk during the Sunday morning session of General Conference this past weekend, one member took to Facebook to share what most of us could not see.

Michelle Cope, a member of The Church of Jesus Christ of Latter-day Saints, happened to be sitting near the front of the conference center, where she could clearly see President Dieter F. Uchtdorf prepared to help, if needed.

Uchtdorf was “on the edge of his seat, almost half way standing up, with his arms stretched out, ready to catch the Prophet at any moment if he fell,” Cope stated in her post. “You could see the worried expression on Uchtdorf’s face as well as focused determination.”

Cope continued to explain that as soon as Monson said “amen,” Uchtdorf rushed to Monson’s side and, with the help of a security guard, helped the prophet back to his seat. Cope’s account of what happened Sunday morning has received more than 37 thousand likes and nearly 10 thousand shares on Facebook. This outpouring of love for the prophet inspired Cope to post another message to Facebook, perhaps even more touching than her first.

To read the rest of the article on LDS.net, click here.