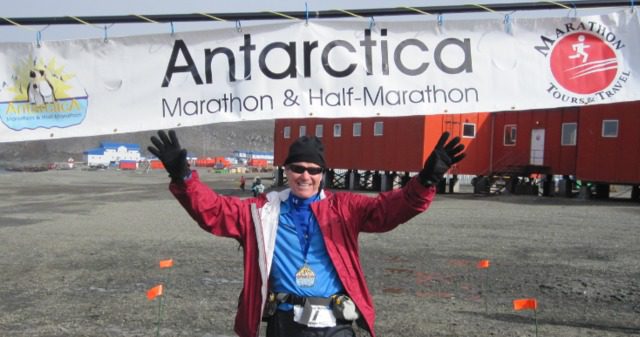 LDS Man Runs Marathons on All 7 Continents (Even Antarctica)

It’s July of 2003, and the track is nearly deserted. Only Mark Dangerfield braves the scorching Arizona heat, running lap after lap after lap.

The workout is part of a recovery process that’s lasted decades. When Mark was in his 20s, he was diagnosed with ulcerative colitis—a chronic disease with no cure. As his condition worsened over the years, a colonoscopy revealed precancerous growths, and doctors recommended the entire colon be surgically removed.

Following two complex operations in 1997, Mark made a gradual but full recovery that motivated him to remain physically active. “When I could finally get up and move again, oh, how wonderful that felt!” he recalls. “The experience planted in my heart a new appreciation for the simple joy of movement.”

Not wanting to feel “over the hill,” Mark decided that to commemorate his 50th birthday, he would ride his bike 50 miles. Each year after that, he conducted a new “test of manhood” to prove to himself that he still had it.

That’s why, in 2003, under the blazing July sun, Mark celebrated his 53rd birthday by running 53 laps around a local community college track. With every lap, he thought of what happened in the corresponding year of his life.

In lap 19, he thought of his call to serve an LDS mission in South Africa. In lap 22, he thought of his marriage. Laps 23, 25, 27, 31, 36, and 39 marked the births of his six children. This exercise in reflection left Mark feeling grateful for his blessings, happy for the life he’d lived to that point, and exhausted from the effort.

Shortly after finishing his goal, Mark realized that 53 laps around a track was roughly half of a marathon. So he decided that for his next birthday, he’d give himself the biggest test yet: the Deseret News Marathon in Salt Lake City.