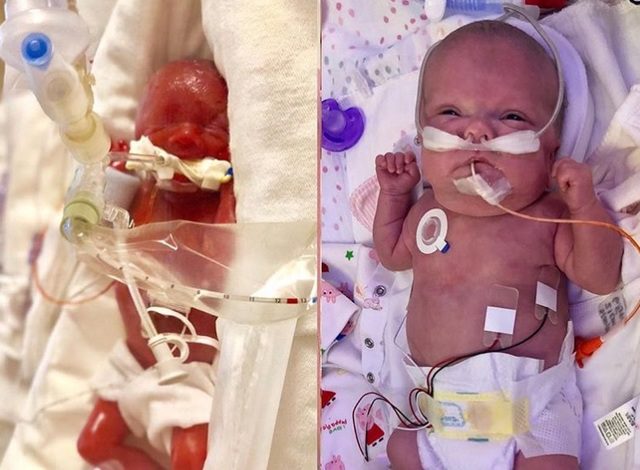 “A medical marvel,” that’s what Cosmopolitan is calling Grace Parkinson, who is only three months old.

On New Year’s Eve, Grace was born after her mother had been pregnant just 23 weeks. While weighing in at only one pound at birth, Grace is now five pounds and her family has been chronicling her miraculous transformation on Instagram.

While news organizations like The Independent, Cosmopolitan, and Women’s Health have written articles featuring Grace and the incredible odds she fights daily to survive, her parents recently shared the faith-filled story behind their daughter’s life with LDS Living.

“She has been such a blessing in our life thanks to Heavenly Father,” Mary Parkinson says.

About how tiny Grace got her name, Mary explains, “She is partly named after her aunt and other family members, but mostly she is named Grace because it is only by the grace of God that she is here. I have lost count of all the times I was told my baby would die.”

After Mary experienced complications during her pregnancy, she would go in for weekly and sometimes twice-weekly doctor appointments, hoping to hear good news. “As my condition became more severe, I was reminded that she may not be alive the next week,” Mary says. “Every appointment the doctors, my husband, and I would collectively hold our breaths hoping to see that heartbeat; and every week we did.”

Mary continues, “When the contractions started at 23 weeks, we were told she only had a four percent chance of surviving birth. But she did. . . .  The only way she is still with us is through Heavenly Father’s mercy.”

40 years ago I had a preemie born 10 and a help weeks early. This article took me back and I remembered the miracles that happened in my life during this difficult time. I hope this story also has a happy ending!