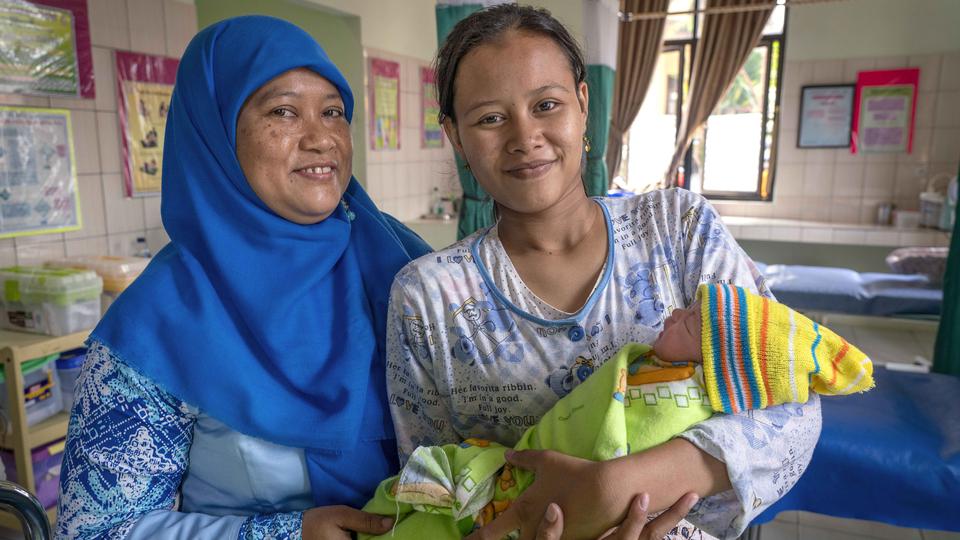 Cover image: A nurse in Banyumas, Indonesia, stands next to a new mother. In 2018, nurses in this birthing center completed a Helping Babies Breathe course run by LDS Charities facilitators.

“We feel great gratitude and kinship with every single person who contributed to the success of the humanitarian work in 2018,” said Sister Sharon Eubank, director of LDS Charities and first counselor in the Relief Society general presidency of The Church of Jesus Christ of Latter-day Saints.

LDS Charities, the humanitarian arm of the Church, has released its annual report for 2018, which shows that the Church and its more than 1,900 partners assisted with 2,885 projects in 141 countries last year.

“This annual report represents the brotherly kindness of tens of thousands of people,” explained Sister Eubank, who said the volunteer hours and donations “make a big impact out of smaller offerings.”

Japan was affected by natural disasters including earthquakes, typhoons and flooding in 2018. In April and June two 6.1-magnitude earthquakes in the Shimane and Osaka regions affected thousands of people. In late June and early July, torrential rain and flooding affected southwestern Japan — the worst the country had seen in decades. Over 200 people died and over a million people were forced to evacuate their homes. LDS Charities worked with many national and local relief organizations in the disaster response and cleanup.

“Most of [the contributors] donated a small amount of money to the humanitarian aid fund, at some personal sacrifice, because they couldn’t read the news and not do something,” Sister Eubank added. “It also represents countless man-hours given by volunteers — again at some personal sacrifice — in order to show up and help someone else facing one of their worst moments.”

In 2018, LDS Charities also responded to international disasters in Saipan and Guatemala. In the United States, relief supplies were provided to survivors of two large hurricanes and the most devastating wildfire in California’s history.

The Church also worked with refugee agencies like the International Rescue Committee to help refugees obtain beds, clothing and food, as well as employment opportunities and language skills. Last year, there were 371 projects with resettlement agencies in 56 countries.

Since 1985, LDS Charities has provided over $2.2 billion in assistance, including cash, commodities and in-kind donations in 197 countries and territories.