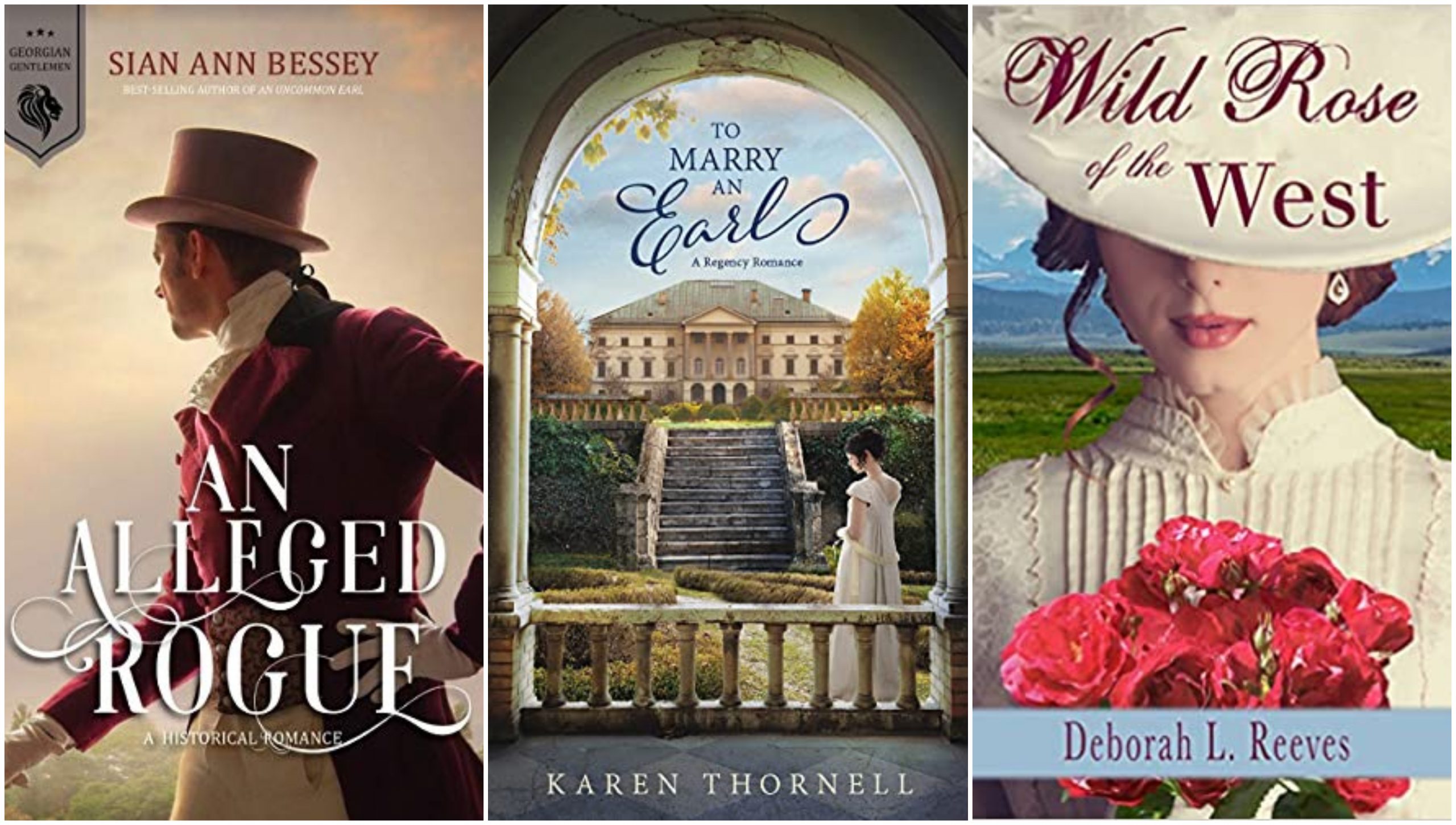 Three authors have taken three different historical events of the 1800s for three very different romances and a glimpse of the historical significance of those time periods. Sian Ann Bessey visits rural England in the mid-1800s in An Alleged Rogue to reveal both the beginnings of women’s rights and the emergence of international crime.  Karen Thornell chooses the early 1800s also in England To Marry an Earl, a time when women were treated as chattel. Deborah L. Reeves crosses the ocean and part of a continent with Wild Rose of the West to reveal the aftermath of both the American Civil War and the Irish potato famine along with the settlement of the American West.

Lord Adam Dunsbourne has spent five years attempting to support his younger sister and restore his family estate after his father was conned into losing his fortune, then shortly thereafter dying. Now his sister is of an age where she should appear at social events, have a season, and begin preparing for marriage. He begins his sister’s entrance into society by attending a neighbor’s dinner party.

Phoebe Hadford and her family recently moved to the neighborhood. She notices the young lady, wearing an outdated dress and her poorly styled hair. Someone tells her the girl is the baron’s younger sister and that he holds her prisoner in their home and completely controls her. She is also told that Lord Dunsbourne gambled away the family fortune and caused his father’s death. Adam had no idea such negative, untrue gossip was circulating through society. As Phoebe takes Adam’s sister under her wing to help her learn the social skills she needs and acquire appropriate clothing, the two become fast friends. She also finds herself falling in love with Adam.

Adam is determined to restore his family’s estate. He works alongside his few servants to raise apples and secure a strong market for them. Meanwhile the man who destroyed his father has a new scam planned, one that will ruin the family of the woman Adam is falling for. Will he succeed once more? And will all of Adam’s hard work and his sister’s future be destroyed as well?

The characters in this story are easy to relate to. Phoebe, particularly, though strong and likable, faces some doubts concerning Adam. She questions her own ability to judge his character as well as the character of those spreading the negative gossip. She’s willing to work hard in a time when upper crust ladies didn’t get their hands dirty and she displays great courage and empathy for her young friend. She also has become adept at circumventing her snobbish mother’s orders. Adam is goal oriented and a little slow to recognize peripheral problems. He is loyal to his deceased father’s name and memory. He has also devoted a great deal of time and effort to identifying and capturing the con artist who destroyed his father and stole his inheritance. The story is plotted well with some areas foreseeable and some coming as complete surprises. The ending is dramatic and satisfying.

Sian Ann Bessey was born in Cambridge, England, and grew up on the island of Anglesey, North Wales. She graduated from Brigham Young University where she met her husband. They make their home in Rexburg, Idaho. They are the parents of five children and also now have five grandchildren. She is a USA Today best-selling author, a Foreword Reviews Book of the Year finalist, and a Whitney Award finalist.

WILD ROSE OF THE WEST by Deborah L. Reeves

Wild Rose of the West is actually a rewrite of Deborah L. Reeves earlier novel, Wild Irish Rose, published in 2010. This delightful Western takes the reader back to 1865 and the end of the Civil War. Blaise Cameron is on his way home from the war to Stockton, California, when he stops in Pittsburgh to see his sister and learns his parents are missing and a con artist has taken over not only the family ranch, but has managed to replace the local sheriff with one of his own men. He has reason to believe his parents are alive and being held hostage and the only reason they haven’t been killed is because he would inherit the ranch. However, his father’s will stipulates he must be married to inherit the ranch.

Rosaleen O’Shay, an Irish immigrant, and her mother lose their jobs at a Pittsburgh factory. Shortly after her father and brother are injured in a coal mine explosion, leaving the family destitute. Rosaleen has no interest in men or marriage and is not happy when her father arranges a marriage for her. She accepts the marriage after the prospective groom, Blaise, informs her he has need of a wife for only a few months and the marriage will be in name only. If she cooperates, he will deed a small farm near his ranch to her.

Danger of many kinds strike the couple and her family as they travel west and encounter the land thief and his henchmen. The relationship between the two is stormy from the day they first meet. Her hot temper and impulsive actions along with his secretiveness create an explosive force between the two.  Can a marriage of convenience begun with near warfare between two people actually lead to happily ever after?

This story is not only a great Western, but gives a look at the historical trials that faced the Irish when they fled their homeland during the potato famine and their dire poverty caused by England’s control of their land. When they reached America they didn’t fare much better. The characters’ personalities seemed a little exaggerated to me, but they were still likable. Rosaleen’s quick temper, mouthiness, and impulsive gestures are both humorous and a little tiresome.  The overall style of writing reminded me of the great Westerns I grew up reading. The plot was handled well, though the ending was a little too abrupt. Overall I enjoyed the book and recommend it to those who like Westerns and American History.

Deborah L. Reeves was born and has always lived in Washington State. Wild Irish Rose is her second novel.

TO MARRY AN EARL by Karen Thornell

Katherine Cartwright has no interest in getting married. After years of emotional abuse from her drunken father and neglect from a seemingly disinterested mother, she just wants to come of age and escape to a solitary life as a governess or maid. For two seasons she manages to avoid marriage, but before her third season her father decides to marry her off to the highest bidder to pay off his gambling debts. A deal is struck and she is to become the bride of an earl she knows nothing about. She is shipped off to the earl’s estate to await the wedding which is set for a few weeks hence, only long enough for the posting of banns.

James Fenwick is the new Earl of Bowcott. When he learns of Katherine’s father’s plan, he is outraged and makes an offer her father is happy to accept. Unknown to Katherine or her father he was a neighbor and playmate of Katherine when he and Katherine were children, one her father disapproved of because of his lack of title or fortune. He and is family left the area abruptly and unexpectedly without telling her goodbye. His circumstances changed abruptly years later when a distant relative died and he was found to be the closest heir to a title and vast estate. Now he wants to help the little girl he never forgot. Their reintroduction is awkward and filled with lies, false assumptions, and pending pressure. Can he gain forgiveness for the many secrets kept from his bride-to-be? Can she be convinced there really is a thing called love? And has he underestimated the threat posed by a cousin and his mother who believe the cousin should have been named the new earl?

Katherine and James are both likable characters readers will cheer for. They aren’t prepared for the awkward position they find themselves placed in, but they make stumbling efforts to do what is right. Sometimes their efforts border on avoidance which simply leads to more problems. It’s easy to forgive her mother for her aloof manner, considering the abusive marriage she has suffered through since she was little more than a child herself. Her father is another matter. His atrocious attitude and disregard for others is portrayed realistically. Other minor characters are handled well. The story is well written with a well-researched historical background and attention to the societal mores of the time period. It slows down a little toward the climax and I grew a little tired of James’s hesitancy to be completely honest with Katherine and his reluctance to take the initiative. However the ending is satisfying and exciting.

Karen Thornell lives in Utah with her husband and kids. This is her second full length novel.