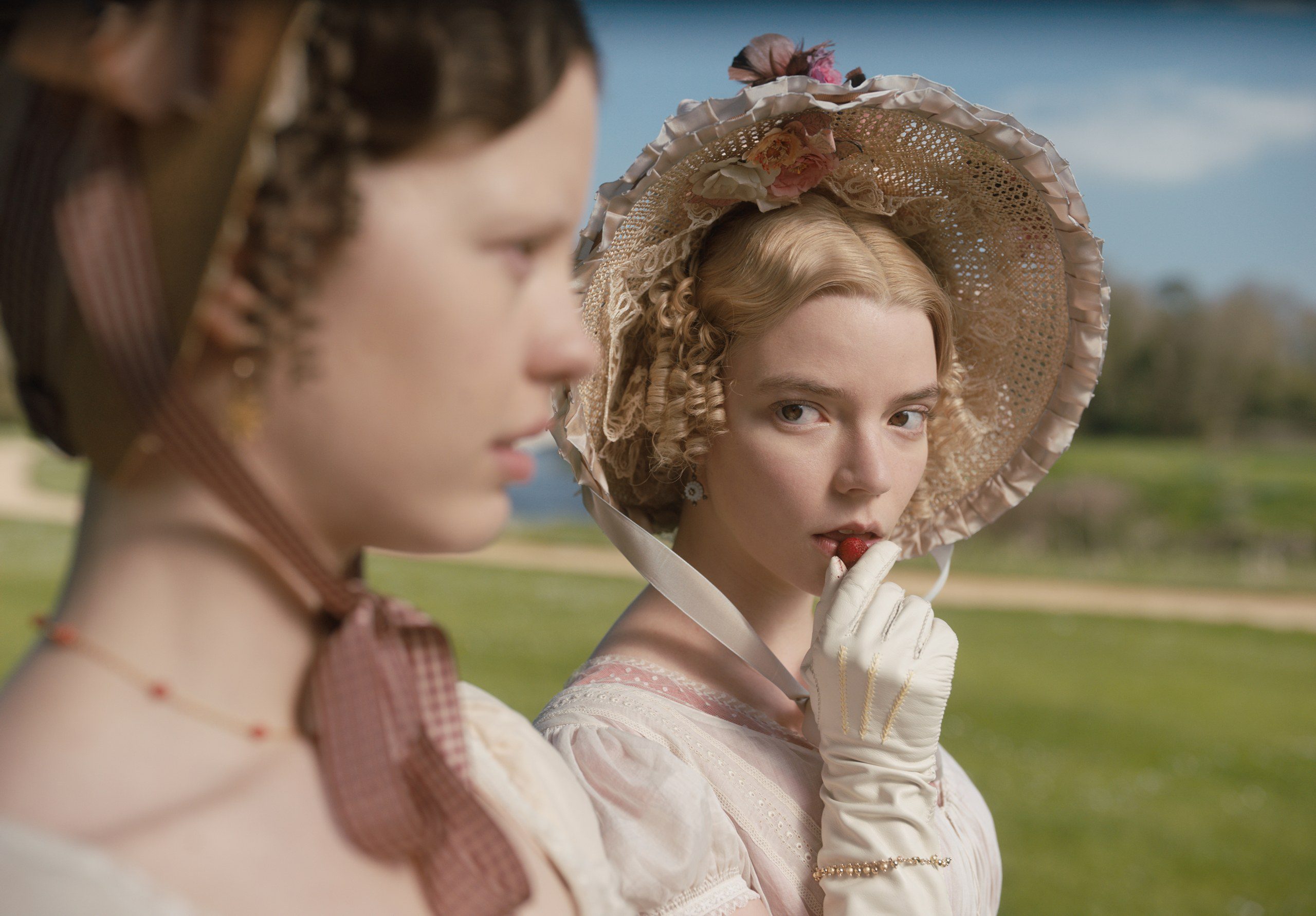 Fans of period pieces by Jane Austin and Downton Abbey will enjoy this extremely stylish remake that takes place in 1800’s England.  Directed by Autumn de Wilde, this sumptuous adaptation is absolutely beautiful to look at.  We’re told on the screen after the opening credits, “Emma Woodhouse, handsome, clever, and rich, had lived nearly twenty-one years in the world with very little to distress or vex her.” And so begins the crum-a-grackle and cureckitycoo.

Anya Taylor-Joy is a lovely Emma. Did you know she grew up in Argentina?  The first time most people saw her was in M. Night Shyamalan’s fantastic thriller Split  She’s equally beautiful as a blonde or a brunette. During the majority of the movie, you won’t like Emma at all because she is so manipulative, selfish, snobby, critical of everyone, and controlling.  That’s the point, really.  Jane Austin actually wrote about her book, “I am going to take a heroine whom no one but myself will much like.”  Mission accomplished. There is, however, a scene where you see Emma grow up and change in an instant. That’s when you’ll start to root for her.

Other cast members are noteworthy, such as Bill Nighy, who is very entertaining, and Josh O’Connor who is perfect as Mr. Elton. He’s especially hilarious in the scenes when he is preaching in the church.  And that smile of his is ridiculously contagious.  Several years ago, I stumbled across Miranda Hart’s British TV show Miranda Complete Collection [DVD]  I got such a kick out of it, so I love seeing her in movies.  She’s the perfect Miss Bates. My maiden name was Bates too!  Despite Johnny Flynn’s shaggy hair which makes him look more suited for the role of farmer than gentleman, he does a good job and actually wrote the song that played during the end credits.  All of the actors who sing and play instruments in the movie really do so.

The costumes by award-winning designer Alexandra Byrne are absolutely stunning with gorgeous details.  It’s so early in the movie year, but there should be another Oscar nomination headed her way for her outstanding work in this film.  The scenes that showed some girls walking by in their red coats were perfect. What a vignette of color.

The music supported the old English atmosphere of the film with some fun variety. You’ll even recognize some of the words and melodies in our LDS hymn book!  You also get to see some beautiful English homes and British landscape.  Both the interior and exterior settings could not have been better.

All of that sounds like a glowing review, right?  Well, the movie isn’t perfect.  Act 1 is super sluggish and almost lost me.  If you can get through its messy and confusing writing, you’ll be rewarded with a much more entertaining and insightful Act 2 and Act 3.  There will be a lot of people (dare I say men?) who would rather shoot themselves than sit through this movie.  It features a lot of silly nonsense, something that Mr. George Knightly abhorred when he stated, “Men of sense do not want silly wives.” Speaking of Mr. Knightly, there just isn’t any chemistry between him and Emma that the two actors portrayed in a believable way.  It’s supposed to be humorous when they argue, but it’s mostly annoying because they yell over each other at the same time, rather than a playful back and forth banter that would have been much more enjoyable and easier to understand.  Some of the dialogue hangs so heavy that the humor is lost.

Some Americans will have a difficult time understanding everything that is said with such strong British accents.  Because there were actors in the cast from several different regions of the United Kingdom, they actually had a voice coach on set.

There are actually quite a few tender moments with beautiful insights that will make you want to be a better, kinder person.

Movie Review Mom:  Trina Boice teaches for BYU-I, is an author of 30 books, and a mother of 4 sons.  You can read more of her reviews at www.MovieReviewMom.com  You can hear her podcast “Daily Inspirational Quotes Hosted by Trina” on Amazon Echo devices and everywhere podcasts are played.  She coaches writers to become best-selling authors at www.FromBook2Business.com   She founded an online school and continues to create courses at www.LifelongLearningEducation.com  Because she is a popular speaker in China and loves to travel around the world, she created www.EmptyNestTravelHacker.com  You can see all of her books and win prizes at www.TrinasBooks.com  You can also find @TrinaBoice on Facebook, Instagram, Pinterest, and Twitter.

Good review.... However; We must be very careful when using phrases like someone would rather shoot themselves…