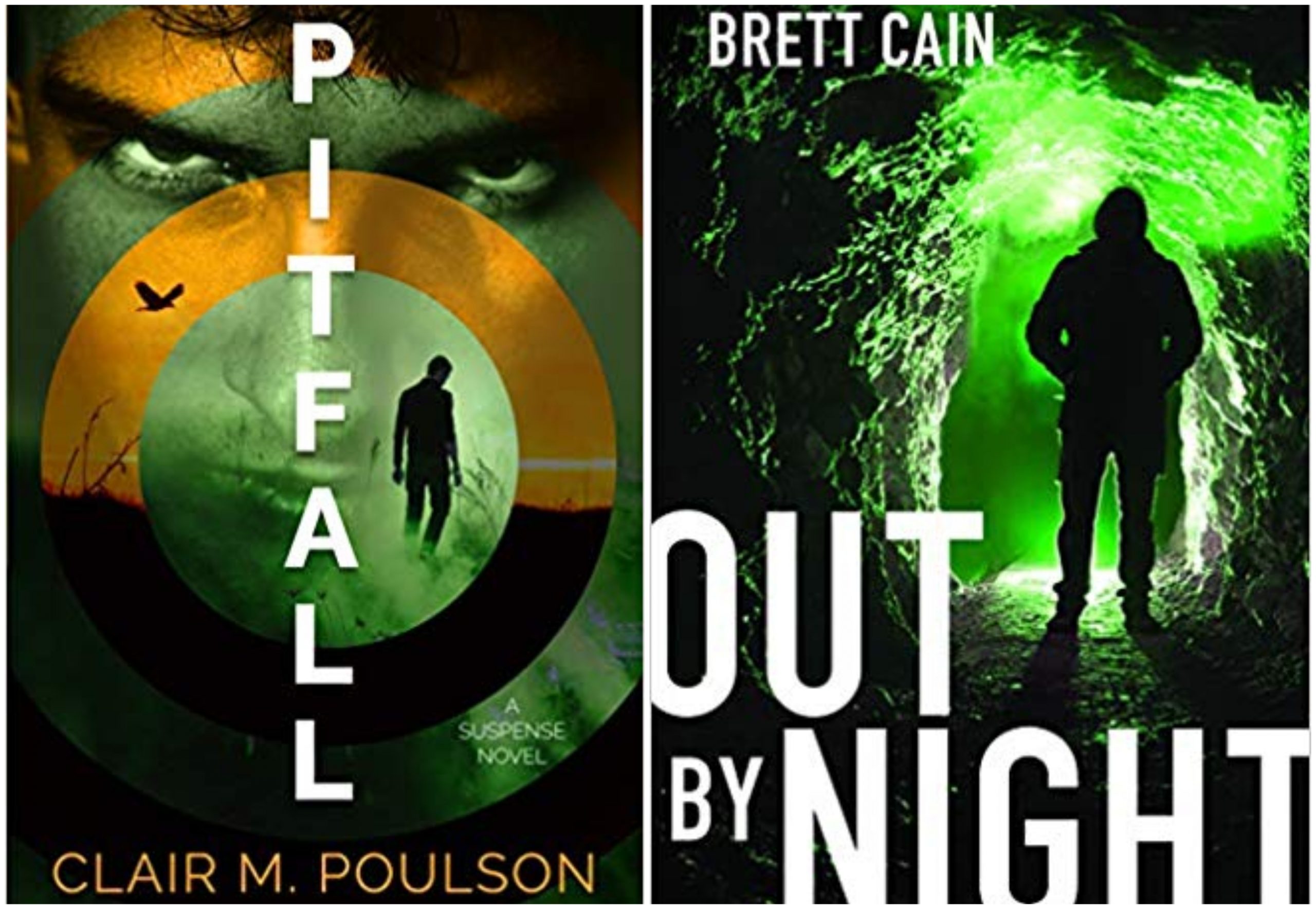 Suspense lovers are going to enjoy these two suspense novels. Pitfall by Clair M. Poulson grabs our attention and our hearts from the first page with the introduction of a major character, a child orphaned before his second birthday. Out By Night continues the adventures of Frank Sawyer, a wanderer, who doesn’t lack adventure, but seems to have serious commitment problems. He’s an avenger, a protector, a loyal friend, a get-things-done person with little regard for his own safety, legal technicalities, or where he might be tomorrow.

Pitfall is Clair M. Poulson’s newest Suspense novel and possibly his best book yet. Told from multiple points of view, this tale will appeal greatly to adults and teens, men and women.

After the deaths of his  parents before Sparky Graves turned two he went into foster care, then was adopted by the Graves family who already had a little boy a couple of years older than Sparky. In time a little girl and another boy were born into the family. The older boy Kal never accepted Sparky and the two are in constant conflict. Kal is a clever manipulator, a cruel bully who always manages to convince his parents Sparky is at fault, a liar, and a troublemaker. The two younger siblings are too afraid of Kal to stand up for themselves or Sparky. Their father is convinced Kal is a good son and adopting Sparking was a big mistake. Their mother has serious doubts  all is quite as Kal says they are.

Sparky at almost sixteen fears for his life and quietly disappears, traveling inside a pipe on a load of pipes being trucked across country. He travels from Kansas to Utah to begin a new life. Befriended by an elderly farmer, needing help with his farm and livestock, he soon becomes attached to the old man. He also becomes friends with a young girl who also helps out at the farm a couple of days each week. When they hear on the news that his mother has been murdered and the police are searching for him, his elderly benefactor hires a private investigator, Lys Grist, to find the real murderer. Meanwhile Sparky’s father and Kal hire a PI, Brad Hagen, to search for him. The two PIs, who already know each other and have a relationship, meet up and discover they’re working the same case. They share what  information they can. The two younger children disappear and the PIs tangle with the local police.

From Kansas to Utah and points in between the two detectives search for clues. Brad is fired when he questions Kal’s innocence in his mother’s murder and his younger sibling’s disappearance. He fears for Sparky’s life. A new detective of questionable character is hired by Kal. However, Brad refuses to discontinue his search for the truth. Lys rushes to warn Sparky and disaster strikes. As the story builds to an exciting climax readers will find themselves glued to the pages of this exciting tale.

Poulson is adept at using the natural landscape not only as background for his novels, but as factors in the story itself. The characters are realistic and the leading characters are easy to care about. From the first page to the last, this book is filled with action. It escalates to a powerful climax with an unusual twist at the end. In most mystery or suspense novels the reader feels disgust, dislike, or some such feelings toward the antagonist and there are certainly those feelings for Kal, but in this story even when he did terrible things, there was a sense of sadness for a mind so twisted in one so young.

Clair M. Poulson was born and raised in Duchesne, Utah, where he and his wife currently live though he didn’t always live there. He served in the U.S. Army and he also spent two years in California as a missionary for the Church of Jesus Christ of Latter-day Saints. He has farmed and ranched most of his life, but has also spent forty years in the criminal justice system, first as a peace officer, then sheriff, and the past twenty years as a justice court judge. During this time he also served on many state and federal law enforcement boards and councils. Along with his law enforcement career and ranching, he has served in numerous church positions including that of Bishop.

OUT BY NIGHT, A FRANK SAWYER NOVEL, by Brett Cain

Out by Night is Brett Cain’s newest Mystery/Suspense novel featuring the same hero, Frank Sawyer, as was the leading character in White Out. Sawyer is a wanderer with no place he has to be, no one he needs to answer to, and no deadlines to meet. His parents are serving a senior mission and his siblings are all married and living in far flung places of the world. So he just hitchhikes around the country, having one adventure after another. He’s a member of the Church of Jesus Christ of Latter-day Saints. He even served a mission in Peru.

While wandering through a mountainous area of California he realizes he’s close to an old missionary companion’s home town. He decides to drop in for a visit. On the way up a steep canyon he has a strange experience. Thinking a fancy new car is stopping to offer him a ride, he’s ready to accept when the vehicle, carrying four people, abruptly makes a U turn and speeds back the way it came. He notices it doesn’t have a license plate. Moments later he hears a strange sound. He follows it and discovers a gray kitten caught in a drainage pipe. While he’s trying to decide what to do with the kitten, a female police officer arrives, and he winds up taking a ride to the jail where he learns the kitten belongs to a young girl who either ran away or was kidnapped.

Deputy Melanie Clark releases Sawyer when she learns he is a friend of her brother. Since all of the motels in town are full due to a local cider festival, she offers him the small room over her garage as a place to stay. Sawyer’s curiosity and strong sense of justice lead him into further involvement with Melanie and soon they are working together to solve the baffling disappearance of not just one teenager, but four.

I liked Frank Sawyer in White Out, but I found him a bit too arrogant in this story. He’s a large well-built young man with both boxing and martial arts skill. His character slows down the story multiple times with long explanations of the latin roots of various words and he skirts the edges of the law with some of his actions. He has an interesting mix of faith in God and faith in himself. His actions also tend to involve physical fights where he wins over near impossible odds. Perhaps cocky, self-confidence is necessary to survive a vagabond lifestyle. Melanie is more likable. She and her deputy partner, Mike, are friendly, but solid, law-abiding police officers. Other minor characters are portrayed very well. The setting works well and shows the author’s familiarity with small towns and mountainous rural areas. The plot moves well and though “who done it” is obvious early on, the suspense of finding the guilty parties keeps the tension high and the conclusion dramatic. Both male and female Suspense readers will enjoy this one.

Brett Cain was born in Illinois, then grew up in Washington state. Like his hero, Brett competed in boxing and martial arts and served a mission in Peru. He attended Southern Virginia University and Brigham Young University. He is currently working to become a police officer. He, his wife, and their daughter live in Olympia, Washington.

OUT BY NIGHT by Brett Cain, Published by Covenant Communications, Inc., 240 pages, soft cover $15.99. Also available on audio CD and for eReaders.