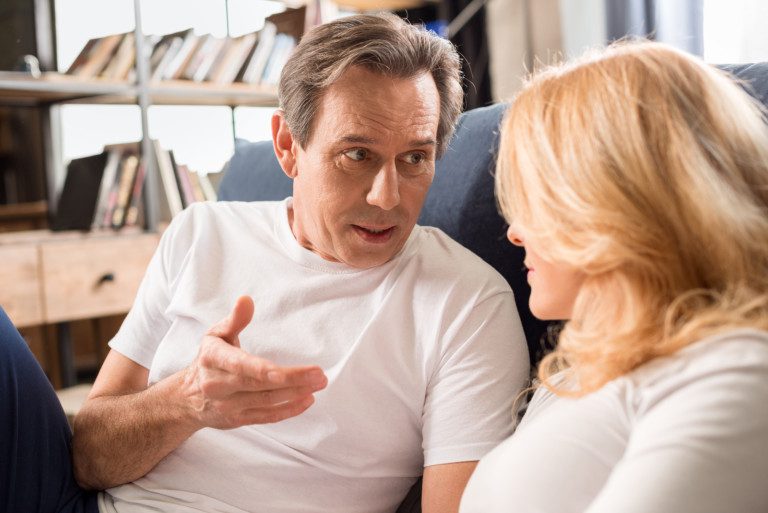 Keeping Confidences Within Your Marriage

A successful, happy marriage is built on a foundation of trust. Former Relief Society general president, Barbara B. Smith, said, “Trust is to human relationships what faith is to gospel living.” There are multiple ways to give trust within a marriage; in this article we’ll discuss specifically how trust applies to keeping confidences with your spouse.

Some of the confidences couples share with each other, that are not for the ears of others may include:

Fears. This could be fear of what might happen regarding your financial security. A husband or wife needs to be able to tell each other, for example, that he or she fears a possible loss of a job. If you can’t discuss this with your spouse and trust that she will not run to someone else to tell of your fear then that’s a loss of trust. Sometimes a spouse just needs to be able to share a fear or concern without it going any further. Sharing with a spouse helps relieve the burden. Then the two of you can discuss options and prayerfully seek the Lord’s help in the matter. You can decide together whom you might share this concern with as you seek help.

Personal Information. This could be any number of personal issues, such as health concerns, infertility problems, intimacy and sexual issues, and the list goes on. These are matters to be discussed privately, just the two of you. Which brings up the point that it is important that you actually do discuss these matters with each other. When the two of you talk about a personal problem, be open to listen to your spouse so she or he does not feel ignored and think they need to find someone else to talk to about it since you won’t listen and take it seriously. Trust each other enough to be open about personal concerns and then seek a solution together.

Desires of Your Heart. If your spouse shares with you a dream or desire that you think seems unattainable, never diminish it by taking it lightly. Listen and follow the dream with her or him. And above all, don’t tell someone else about it. Let your mate do the telling of those personal desires, not you. Do not belittle your spouse’s hopes by sharing them with others. Some may say to a friend, “My wife (or husband) has this crazy idea that . . .” That is a betrayal of trust. Mocking has no place in marriage.

Plans. Maybe the two of your are talking about moving out of town or buying a new home in the same town. These are plans in embryo and are not for general discussion. When you are ready to share this information with others, both of you need to agree that it’s time. This is the same with any private plans that need to be kept confidential. A few others might include considering having another child, possibly returning to college, or planning to start a new business.

It’s a sad day when private matters are prematurely shared with others. A client told of hearing his brother-in-law, with whom he worked, telling another employee private things he had told his wife. It was apparent she had shared this private information with her sister, who told her husband. He was deeply hurt by this betrayal of his wife. Keep confidences between the two of you and no one else until an agreed-upon time to share with others.

Sharing with the Opposite Gender

This becomes particularly harmful when confidences and private marital issues are shared with someone of the opposite gender. The desire to share private information with someone can be tempting. It can start innocently, which is what happened to Preston (names changed)—CEO of his company, married, and an active Latter-day Saint who held an important position of leadership in the Church. Josie was his secretary, also a member of the Church.

One day Josie asked to talk with Preston privately in his office. She began to confide in him, telling him about problems in her marriage. He felt sympathetic and listened with the intent of helping her along a difficult path. He had some challenges he was dealing with in his own marriage, and he in turn shared these confidences with her, hoping it would help her realize that she wasn’t the only one struggling. After all, as the old adage says, misery loves company.

The confiding continued, and before long, they were sharing more than their problems. It went from a feeling of compassion into a downward spiral of passion. It didn’t take long before they “fell in love” and decided they each, at last, had found their soul mate. He took the bait and fell head-first into Satan’s trap; so did she. He divorced his wife and married the secretary who divorced her husband; their actions brought resentment and sorrow to the lives of so many, especially his children. They could not believe ther “righteous” father could have done this to their faithful mother. Two families were broken and left grasping for meaning. This true story brought untold heartache into the lives of everyone involved.

Sharing your personal information and problems with someone of the opposite sex, especially in a private setting, can open the door to far more than you bargained for. President Ezra Taft Benson said, “If you are married, avoid being alone with members of the opposite sex whenever possible. Many of the tragedies of immorality begin when a man and woman are alone in the office, or at church, or driving in a car. At first there may be no intent or even thought of sin. But the circumstances provide a fertile seedbed for temptation. . . . It is so much easier to avoid such circumstances from the start so that temptation gets no chance for nourishment.” (Teachings of the Presidents of the Church: Ezra Taft Benson, 223)

Larry and his wife lived in married student housing a few miles away from the meetinghouse. Their next-door neighbor, Marilyn, was in their ward, and Larry and Marilyn were both in the ward choir. The choir practiced in the evening, and Marilyn asked Larry if she could ride with him each week. That seemed like a kind deed to do for a good neighbor. The problem came in the fact that it was just the two of them.

After a few weeks, she began talking to Larry during their rides home about confidential things she and her husband were going through. This escalated into her sharing things she didn’t like about her husband. He was a good, faithful man, but like everyone, he had his shortcomings. One evening as they pulled up to their apartment building, she stayed in the car and kept talking. It was dark, and Larry began to feel a little uncomfortable. At that instant he had a distinct impression that said, “Turn on the interior car lights.” He thought the impression was odd, but it had come so strongly that he immediately obeyed.

This was a protection for them. They were then in full view of anyone who may be walking by. Light always chases away darkness. However, Larry realized that the best protection was to not be alone, preventing Marilyn from sharing any more confidences with him. Her conversations were becoming too intimate. By following the Spirit, a potential problem was averted.

A stake president told of a time when he was elders quorum president in his ward. A single sister who needed personal assistance lived in the ward. He ended up going to her home alone to listen to her complaints and needs, hoping to give her the listening ear she needed from a priesthood leader. On a follow-up visit, he told his wife where he was going and she, realizing the inappropriateness of his going alone, told him of her concern. He paid attention and realized the danger of the situation. His wife was protecting their marriage, and he listened. He didn’t abandon this sister; he took precautions by taking another priesthood leader with him when he visited her.

Several years later, and after counseling many couples as a stake president, this brother realized even more the need for couples to safeguard their marriage, including not talking alone to someone of the opposite sex about private matters. Boundaries must be set and adhered to.

CONFIDE IN YOUR SPOUSE

The best person in the world to tell your troubles to is your spouse. Christian writer Dennis Rainey said, “Know your boundaries. Put fences around your heart and protect sacred ground, reserved only for your spouse. [My wife] and I are careful to share our deepest feelings, needs, and difficulties only with each other.”

He went on to explain that, “Emotional adultery is unfaithfulness of the heart. When two people begin talking of intimate struggles, doubts or feelings, they may be sharing their souls in a way that God intended exclusively for the marriage relationship.”

In our book Because We Love Our Marriage: 12 Ways to Safeguard Your Eternal Relationship, we go into more details regarding confidences that need to be kept within the marriage, as well as how to avoid certain situations that you may not have considered. Building this fundamental trust with your spouse is crucial. There are many more ways to safeguard your eternal relationship; this is but a small piece that may be helpful.

We conclude with the wise words of Elder Joe J. Christensen, formerly of the Presidency of the Seventy. He counseled: “Make the time to listen to your spouse; even schedule it regularly. Visit with each other and assess how you are doing as a marriage partner.”

[This article contains excerpts from Gary and Joy Lundberg’s book Because We Love Our Marriage, 27 – 39. For more information and how to order the book, click here.]

if one knows it, it is a secret. If two know it, it is in danger of becoming public knowledge.

I fully agree with what is written here in this article. When I was married to my now ex-husband, I wanted to only speak with him about things that were happening with us, but he refused to discuss anything and blamed everything on me. Said that I was the problem. I didn't know what to do, so I confided in my mother and in a friend of mine who is of his country, Peru. I also confided in the bishop, but it got us no where. No one was interested in helping me or us to keep things together in the marriage. If I'd had my way everything would have been kept within the confines of our marriage, but one person can only do so much. Usually the marriage is a team. How I wish that we could have had this.