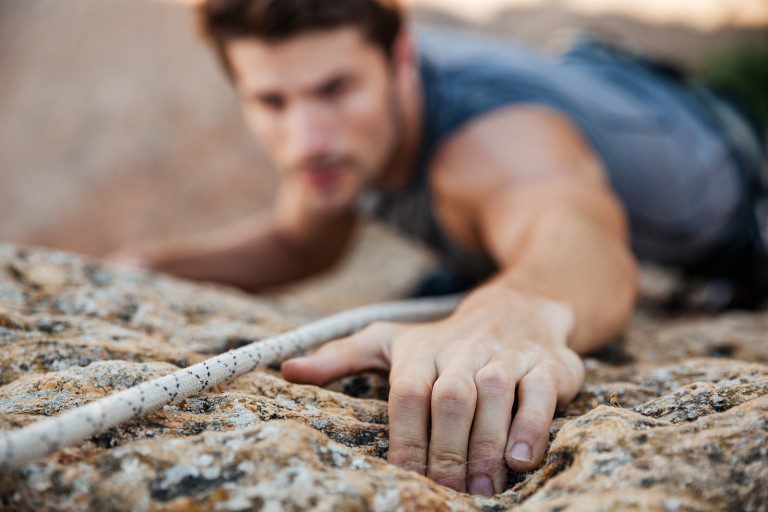 The following is a continuing story from last week’s column. To read the previous article, click here.

My eighteen scouts were excited to see me do something I feared, the mountain climbing merit badge. But since I promised I would do any valid scout thing they wanted, I was stuck. My first climb up the tower was disastrous since the overconfident boy who was supposed to lower me back down didn’t buckle in well. He was jerked out of the harness, and he passed me going up the tower as I came down. I thought I was done, but then I learned I had to make two more climbs.

Devin, who was more trustworthy, was my next belayer—the person holding the rope. I made sure he was buckled tightly in before I turned to make the ascent. I wasn’t hurt in the first fall too much since Gordy’s weight slowed my descent. But I still shook as I climbed so that I could hardly pull myself up. Finally, I reached the top.

“Devin, are you ready?” I called back over my shoulder.

I took a deep breath and let go. Devin was tethered with a few feet of rope to a post. When I let go, my extra weight lifted him straight in the air. It scared him so badly that he let the rope slip, and I dropped about ten feet before the mechanism caught and stopped me. My heart was pounding, I was yelling, and the boys and Rod, the assistant scoutmaster, were laughing. That is, all of the boys except for Devin were laughing. He was dangling like a kite.

Rod and the other boys pulled Devin to the ground, then held onto him until the rope could gradually be let out to get me down.

“Just one more climb and you got it,” the tower director said. “Which boy do you want on the rope for the last climb?”

“Boy, nothin’,” I said. “A responsible adult is my belayer.”

The tower director scowled. “You’re supposed to trust your boys. But I suppose requirements say you just have to make the climbs.”

Rod buckled in on the rope, and I started my last climb. By the time I got to the top, I was shaking so much I could hardly hold on.

I wasn’t sure I liked the chuckle in his voice, but I was too tired to hold on, so I let go. I immediately plunged down the side of the tower. I was in absolute freefall. I fell for over half the distance, and in that instant, I knew I was going to die. But suddenly, the rope pulled tight and stretched. Then I bounced upward about six feet and then came down again. Like a spring I went up and down, finally coming to a stop.

My heart was pounding so hard it had choked my voice to a gurgling, gasping squeak. I couldn’t even yell. When I finally came to a stop, and my head quit spinning, I did yell, but the boys and Rod were laughing so hard they could hardly hear me.

“What the devil kind of belaying was that?”

“Knowing how much you hate heights,” Rod chortled, “I thought I’d get you down a little sooner by letting out a little extra rope at the beginning.”

Rod laughed again. “You might want to be careful. I’m still the one deciding how much rope to let out.”

By the time I got down, my chest felt like I had been lifting weights on the inside from the pounding of my heart.

Rod slapped me on the back. “You’re a good sport. Let’s all go get an ice-cream, and yours is on me.”

By the time we got to town and purchased our ice-cream, I had cooled off. And as we ate, Mort said something that made it worth it.

“The main thing we’ll always remember,” he said, “is that you kept your promise even when you were afraid.”