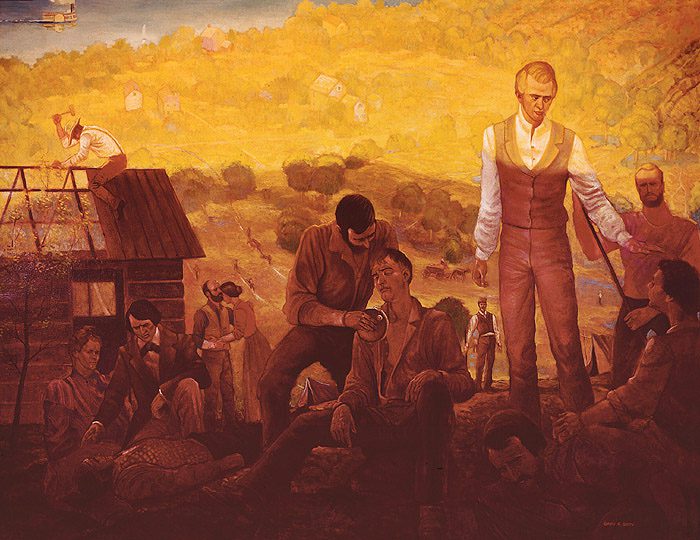 NOTE FROM AUTHOR:  This is the second in a three-part series on Joseph Smith, Brigham Young, herbs and medicine in the early history of the Church.  The health of the Saints was a great priority for the young Prophet and brilliant city leader of Nauvoo. You can read the first article HERE

The articles are based on the book “Joseph Smith and Herbal Medicine” by John Heinerman, (referred to in this article as JS&HM) Bonneville Books in 2009.

IMPORTANT: While this article is interesting and informational, in no way do I intend to imply that modern medicine and doctors are not needed.  Please always consult your doctor for your own health matters.  However, as you read it, you may be interested in the herbal detox product that has become an important part of a much healthier, easier daily life for many Meridian friends, including Meridian publisher,  Scot Proctor and columnists Darla Isackson, Dr. Craig Frogley and Janice Kapp Perry. CLICK HERE

It has been said that a Missouri minister visited Nauvoo and made the candid observation that he could “find no trace whatsoever of any medical doctors in Nauvoo, as the Mormon leader just won’t allow them here.” (JS&HM p. 37) While that is doubtful and the minister himself stayed with a family on the other side of the river who employed a medical doctor, the Prophet Joseph did record in his journal for the date of September 5, 1841:

“I preached to a large congregation at the stand, on the science and practice of medicine, desiring to persuade the Saints to trust in God when sick, and not in an arm of flesh, and live by faith and not by medicine, or poison; and when they were sick, and had called for the Elders to pray for them, and they were not healed, to use herbs and mild food.”  Documentary History of the Church, Volume 4, p. 414.

(For the principle of definition, an herb is a plant of economic value; specifically one used for medicinal purposes, or for its scent or flavor.)

This would have been comfortable counsel for the early saints in Nauvoo who had emigrated to Nauvoo came from other religions where most were well read in the Bible.  For many, it was their primary source of reading and schooling.  Both the Old Testament and the New Testament, along with the Savior’s sermons, have frequent mention of plants and herbs, so this was a familiar source of reference.

Joseph’s feelings for being pro-herb and anti-medicine were based on both personal experiences and his early years (See the last article in this series HERE) and the revealed word in Section 89 of the Doctrine and Covenants, known as “The Word of Wisdom.”  Though rarely ill himself, when he was, he would call upon those type of men in whom he believed most sincerely, the herbalists known as “botanical physicians.”

“Friday, December 15, 1843.  I awoke this morning in very good health, but was soon suddenly seized with a great dryness of the mouth and throat and sickness of the stomach and vomited freely.  My wife waited on me, assisted by my scribe and Dr. L. Richards, who administered to me herbs and ?? – (smudged and unable to make out two words) milder drinks.  I was never prostrated so low in so short a time before. But by evening, I was considerably revived.” (Journals of Joseph Smith)

The “Dr. L. Richards” to whom he refers was Levi Richards, the brother of Willard Richards, Nauvoo’s primary botanical physician and a convert from Massachusetts.  Willard had been trained in the Thomsonian Botanical Method from Samuel Thomson himself (see previous articlefor more information about Samuel Thomson.)  They and their third brother Phineas, another botanical physician, treated their patients with warm medicines’ of which cayenne and lobelia were two principal ingredients.  He also used mild herbs, but no “poison pills,” i.e. the calomel that had killed Joseph’s brother Alvin.  As noted, Willard became the primary botanical physician in Nauvoo, while Levi served as the surgeon general of the Nauvoo Legion, and was the personal physician to the Prophet Joseph and his brother Hyrum.  Joseph wrote, “I will say that Levi Richards is the best physician I have ever been acquainted with.” Their brother Phineas is best remembered for a mold that he would use to make herb pills as “large as horse chestnuts.” (JS&HM p. 43)

Under the influence of these brothers, Joseph established a Board of Health in the early 1840s that advocated the use of herbs and botanical medicine, but greatly restricted others who did not know herbs and how to use them.  There was even a dentist in Nauvoo who followed the Thomsonian Botanical method, Alexander Neibauer.  He was a Jewish man from Prussia who was the first Jew to be baptized into the church.  He was introduced to the gospel and baptized along with his wife in 1838, while studying dentistry in Preston, England.

“…God gave his sanction by healing; that there could be no more sin in any female laying hands on the sick, than on wetting the face with water; that it was no sin for anybody to do it that has faith, or if the sick has faith, to be healed by the administration. (Minutes of the Female Relief Society of Nauvoo, March 17, 1842.  L.D.S. Church Historian’s Office)

He even went so far as to set some men and women apart to the office of ministering unto the sick, including women to serve as midwives and nurses. Ann Carling was one of three specially called midwives he personally set apart. In her blessing she was told that she would be successful in caring for the sick if she would use herbs exclusively in her work. Some years later in Utah she became known as the “herb doctor,” personally growing and processing the herbs for the use of her patients. Other women were set apart as “nurses in Israel.” They would sometimes accompany him on his rounds to the sick, and assist in administrations to them. A Dr. Calvin Crane was also set apart to care for the sick. He made remedies from roots and herbs that he gathered and compounded into pills.

As would be expected, the midwives had a strong bond of sisterhood and worked together. They met and discussed the spiritual aspects of their work, quoting Joseph Smith, Brigham Young and proclaimed the blessings of health and mercy for their patients that they had experienced after being set apart. Patty Sessions, one of the three midwives, became one of Utah’s foremost early midwives. Her medical reports were very objective, but her personal journals revealed her deep testimony of the restored gospel, and the inseparable nature of practicing medicine while serving God under the mantle of the Priesthood.

Some of the herbs used by these early LDS health practitioners were:

Even with their training and settings apart, however, these early health leaders considered and used faith in the Lord to be their first tool for healing.

They called upon His name in prayer, then exercised their commission for the laying on of hands. They asked their patients to call upon the Lord with faith and prayer as well. To these doctors and nurses in Nauvoo, “God, with the all-seeing eye and the never-failing ear, was always the greatest doctor of all.  When death came to a patient, it was the Lord’s will. They followed the Prophet’s faith and example, which was not unlike many other religious leaders in advocating faith healing.

There were some members of the Church who believed that all disease was caused by the Devil and that faith should cure all. This led to problems and even became a matter for discussions at High Councils.

The Prophet is quoted as saying, “It is not lawful to teach the Church that all disease is of the Devil. But if there is any that has this faith, let him have it to himself. If there are any that believe that roots and herbs administered to the sick and all wholesome vegetables which God has ordained for the use of man, and if any say that such things applied to the sick in order that they may receive health, and this applied by any member of the Church … if there are any among you that teach that these things are of Satan, such teaching is not of God.” (L.D.S. Church Historian’s Office, entry for August 31, 1834).

This statement documents in a wonderful way the Prophet’s own mission statement: “I teach them correct principles, and let them govern themselves.”

The emphasis on this comment is that these are teachings, not hard policies worthy of serious rebuke.

Documented time and again are the stories of healings that reveal Joseph’s belief that the first source of healing was faith in the Lord Jesus Christ, and then it was to “follow the Savior himself, who frequently made reference to herbs in his teachings. Joseph Smith sought to follow the Savior’s life in every respect, even to the inclusion of herbal medicine in his way of living, which he strongly endorsed and encouraged the early Saints to do as well.” (JS&HM, page 36.)In my next article I will discuss revelation and herbs, and introduce Brigham Young’s feeling on health, herbs and medicine.

These articles may inspire you to learn more about the herbal detox health product that has become exceptionally helpful for Meridian Readers since 2008: CLICK HERE

Carolyn Allen is the Author of 60 Seconds to Weight Loss Success .She has been providing mental and spiritual approaches for weight loss success both online and in the Washington, DC community since 1999 presenting for Weight Watchers, First Class, Fairfax County Adult Education and other community groups in the Washington, D.C. area.  She has been providing health information at Meridian since 2007.

She and her husband Bob share My Miracle Detox online and here at Meridian. It is an herbal detox keeping with the Word of Wisdom, now used by Meridian readers and missionaries everywhere.  CLICK HERE.

She is mother of five and the grandmother of a growing number of delightful grandsons and granddaughters and lives with her husband, Bob, in Jackson Tennessee where she serves as an Activity Day leader.

Dallin Oaks gave a talk entitled “Healing the Sick” in the April 2010 Conference. Please read below: Latter-day Saints believe in applying the best available scientific knowledge and techniques. We use nutrition, exercise, and other practices to preserve health, and we enlist the help of healing practitioners, such as physicians and surgeons, to restore health. The use of medical science is not at odds with our prayers of faith and our reliance on priesthood blessings. When a person requested a priesthood blessing, Brigham Young would ask, “Have you used any remedies?” To those who said no because “we wish the Elders to lay hands upon us, and we have faith that we shall be healed,” President Young replied: “That is very inconsistent according to my faith. If we are sick, and ask the Lord to heal us, and to do all for us that is necessary to be done, according to my understanding of the Gospel of salvation, I might as well ask the Lord to cause my wheat and corn to grow, without my plowing the ground and casting in the seed. It appears consistent to me to apply every remedy that comes within the range of my knowledge, and [then] to ask my Father in Heaven … to sanctify that application to the healing of my body.”