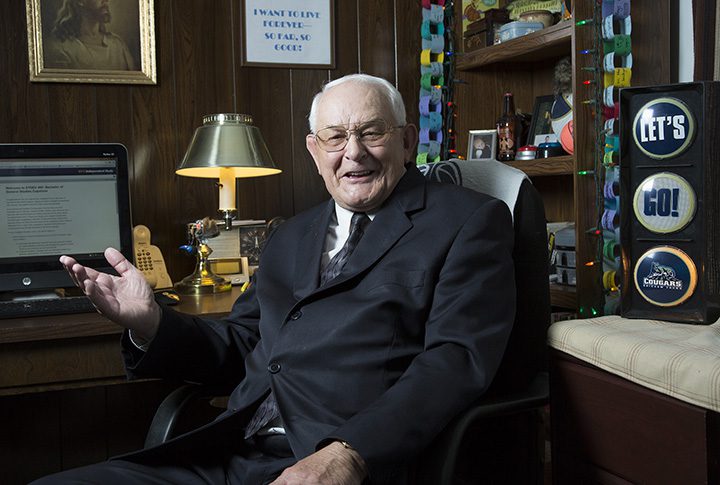 Lawrence Fuja came to BYU in 1960, but left before earning a degree. Now, 55 years later and with lots of support from his five children, Fuja is getting that degree. Finishing his course work last December, Fuja will be walking at April graduation to celebrate earning a Bachelor of General Studies degree, with an emphasis in family history.

Going back to school after a lifetime of experiences isn’t easy, Fuja said. Now, at 81, Fuja sees a bright future ahead because of what he learned pursuing his degree. Here’s Fuja’s story, written in his own words.

From Idea to Reality

I strongly resisted the idea several years ago when one of my married sons told me that I was going to go back to school and get a degree  “I am an old man,” was my response, “I have forgot everything I knew.” His next suggestion was that we could just start with what I did remember and go from there.

He didn’t waste any time and headed me to his computer where we began looking at the possibilities in the Bachelor of General Studies (BGS) program and determined that family history might be a good approach since that would also begin to fulfill a promise in my Patriarchal blessing in which I was told I had been given the opportunity to become a member of the Church so that I could do work for my ancestors.

He and I both knew that the fact that my wife has been an ardent genealogist for many years would give me a “handy helper.” And thus I began a journey which has taken me through several years of “toil and stress” of the brain!

The truth is that when I started [at BYU again], I had no real intention of finishing. But I had forgot that I would have five adult children, all of whom had higher degrees, who would be encouraging, cajoling, and even prodding me along!

Additionally I discovered that the BGS office was loaded with people who were ready to assist at every turn.  I was amazed at how patient they were with me, how they showed me better ways to do well in classes, even helped me receive some scholarships – all in all, THEY were totally committed to seeing me accomplish this huge task that I thought was not possible to do.

Instructors were a large part of my being able to switch my thinking from an engineer mindset to engaging my brain in the comprehension and understanding that written words can be tools just the same as formulas can be learned and used.

I must confess that I fell in love with history and all that goes along with the plan of our Heavenly Father for this mortality thing we are engaged in.  I have locked in my mind and heart many events in the earth’s history, from English and Scottish kings to the development of this great land of America. I must confess that I had no idea what women went through in ages past in the world, and the slavery matter in this country was a real eye-opener to this son of Polish immigrant grandparents who grew up in a racial environment in Chicago!

From that foundation, I began to gain an appreciation for my ancestors as well as those of my wife and thus began my adventures in family history. I still consider myself a novice but I have learned an immense amount about our families. I recall being absolutely flabbergasted when I discovered that one of my aunts was divorced and that she most likely had a hard life rearing five children back in the days when not much help was given to women in that situation. What I remember is that when she came to visit us she had such an infectious jovial laugh that I loved to be around her.

The results of obtaining this degree will be forthcoming for years to come but I do know that I am a better person for having gone down this road and am so grateful for the support of my family, the instructors and staff of BGS, and all who have encouraged me along the way.