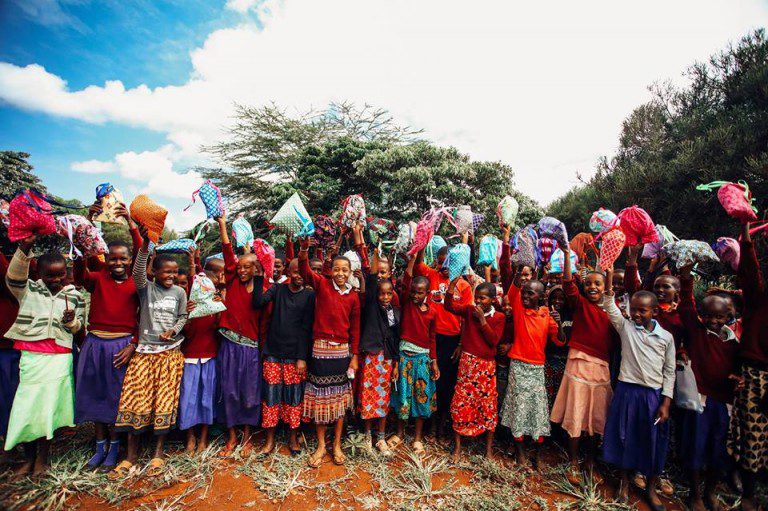 Cover image: Happy recipients of the colorful kits, in Africa.

Ten years ago, Latter-day Saint Celeste Mergens was a health and education volunteer in Kenya. When she asked what the girls were doing for feminine hygiene, the answer was that the girls—500 of them– would sit on cardboard in their rooms, unable to leave, unable to attend school. In many regions a stigma exists that forces girls to hide when having periods. This meant they would fall behind in schoolwork, often dropping out completely.

Worse, Mergens says, they were “sexually exploited in exchange for a single disposable pad.” That’s when Days for Girls was born, a non-profit now in 120 countries, giving a future back to more than a million girls and women.

Mergens experienced harsh poverty herself as a child, and now leads thousands of volunteers in the effort to help “girls go to school and women go to work by ensuring they have the feminine care products they can count on, month after month.”

On March 2, Mergens spoke in two sessions to a packed Stake Center in Rocklin, California, filled with members of many faiths beyond our own, including ministers and other faith leaders. Pastor Alison Berry of the Loomis First United Methodist Church gave the invocation. Sue Bushell, who heads up the sewing ministry for Bayside Church, was a speaker. Women of her church have worked for years to help Days for Girls and also sew clothing for needy children in other countries. “If the Lord needs something to happen, be ready,” she said.

Karen Wilkes, the LDS member who organized the entire mega event, also spoke, and has served missions in Africa where she has personally delivered the kits and seen the joyous reactions of recipients. Her husband, Brad Wilkes, has been equally involved with the mountains of fabric, storage shelves, organizing, and transporting.  Many stakes got involved. including men and Young Men as well. They set the ambitious goal of a thousand kits, but response was so overwhelming that they were able to double their projection.

Mergens’ passion for helping girls around the world is contagious. “None of us are about our circumstance,” she said. “We are so much more than that. Those we serve are not about their circumstances, either.”

Men, women, and children of all faiths—or no faith– have been cutting, ironing, sewing, and assembling washable pads and liners for months to help this worldwide cause. Many got involved by finding the project on JustServe.org. Then attendees of the conference moved through work stations where they assembled the donated components for kits going to Africa, Asia, Brazil, and around the world. Underwear, soap, drawstring bags—every necessity was stacked on tables for quick assembly. The impact of a community uniting behind a great cause was palpable. Different faith points didn’t matter; love was all that mattered.

“We didn’t get to be there with the suffragettes, but we got to do this one. You were part of that day,” she told those in attendance. “Ending stigma and shame. This is how we reach every girl, everywhere, period.”