Insights into the Authenticity of the Book of Mormon | Meridian Magazine 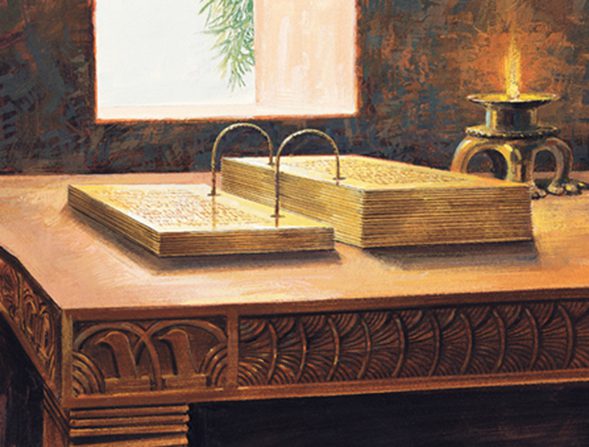 Insights into the Authenticity of the Book of Mormon

Editor’s Note: The following is the first chapter in a new book from Marilynne Todd Linford on the Book of Mormon. Click here for more information.

My journey began when a series of experiences led me to type the Book of Mormon as a new way to study it. I began on January 13, 2010, and typed the title page, the introduction, the Testimony of Three Witnesses, and the Testimony of Eight Witnesses.

A year and a half and 531 pages later, on August 1, 2011, I typed Moroni’s last words: “And now I bid unto all, farewell. I soon go to rest in the paradise of God, until my spirit and body shall again reunite, and I am brought forth triumphant through the air, to meet you before the pleasing bar of the great Jehovah, the Eternal Judge of both quick and dead. Amen!” The exclamation point is mine. I had typed all 268,163 words, plus all the introductory pages and headnotes—everything but the footnotes.

They had been awe-filled months, and I had received the results for which I had hoped—deeper insights into the doctrines, specific and detailed knowledge of the peoples and places, considerably greater understanding of the structure of this book of holy scripture, and

increased ability to identify with Joseph Smith and Oliver Cowdery. I felt richly rewarded; my expectations were met. I would have felt forever grateful even if the experience had ended there, but along the way, about seven months in, something completely unexpected happened.

I had typed from 1 Nephi through Mosiah, which took me to page 207. The longest book in the Book of Mormon, the book of Alma, loomed before me. Although I had learned and felt much, Alma with its 63 chapters and 162 pages seemed daunting. Over and over I had to refuse to listen to the negative voice that kept whispering in my ear to abandon the project. After much consideration, I determined to forge ahead and finish.

As I began to type, individual words seemed to call attention to themselves. Thoughts came, such as I don’t remember typing that word before and This text feels somehow different. After typing more than two hundred pages, I could tell something had changed. I couldn’t identify what it was, but something felt unsettling.

Then the thought occurred to me that some years previously I had heard that the word ‘plan’ was not found in the Bible. I opened my computer scripture program and typed p-l-a-n and saw that ‘plan’ is found forty-seven times in scripture. I clicked on View to see where the word is found and scrolled down. Sure enough. Plan is not found in the Old or New Testaments. It is found forty-three times in the Book of Mormon, twice in the Doctrine and Covenants, and twice in the Pearl of Great Price. Then, thinking about the word ‘plan’, the phrase ‘plan of happiness’ came to mind, and I wondered how many times happiness is found in scripture.

I decided I should pay attention to what I was feeling. Even though I had already typed most of Alma 1, I deleted it and started the chapter over. I suspected I was experiencing the differences in two authors’ styles, which should be anticipated because King Benjamin’s son Mosiah, who wrote the last chapter of Mosiah, and Alma’s son Alma, who wrote the first chapter of Alma, would have expressed themselves differently. It would be like reading a summary of one talk by President Henry B. Eyring and another by President Dieter F. Uchtdorf. You would feel a change of style and tone, even though the talks were summarized. Then the thought occurred to me that what I was experiencing might be more than just the difference in Mosiah’s and Alma’s styles. Could it be that they expressed their thoughts using different words?

As I started to retype Alma 1, I watched for words that might have triggered my feelings that something had changed. I typed: “Now it came to pass that in the first year of the reign of the judges over the people of Nephi, from this time forward, king Mosiah having gone the way of all the earth, having warred . . .” I paused and looked at the word warred. I couldn’t think of a scripture that contained the word warred and couldn’t recall typing it. So I typed w-a-r-r-e-d into the scripture search program and saw ten occurrences—nine in the Old Testament and one in the Book of Mormon, of course in Alma 1:1.

At this point, I thought Alma 1 was probably an anomaly, but just in case, I decided to go back to Mosiah 29, the last chapter of Mosiah, to see if Mosiah’s vocabulary was different enough that it would have triggered a subconscious awareness that something had changed. I was barely cognizant that some type of pattern was emerging. Without much effort, using the same criteria, I found thirty unique words: all-wise, anxious, appoint, arrange, business, disadvantages, enacteth, enumerated, exacted, expressed, extending, higher, inequality, iniquitous, interposition, lower, lucre, newly, plundering, privileges, relinquished, remains, repugnant, rightly, sincere, teareth, trampleth, troubles, tyrant, willingness.

Curious, but still not realizing what I had stumbled on to (or been led to), I moved to Alma 2, looking for words that appear for the first or only time in that chapter. In verse two, I saw the word ‘drawn’. In verse three, I saw ‘alarming’ and then ‘persuasions’ and typed each of them into the scripture search program. All three were found for the first time in the Book of Mormon in Alma 2:1–3. Soon I found more words and then more words—and more and more. It was astounding! Before long I had more than a hundred words on the list and couldn’t keep track of them anymore. So I alphabetized them. A few days later, I had found so many more that I needed to number them. I also modified how I kept track of the words, not by book but rather by the person who was being quoted or written about.

Every time the plates were passed to another record keeper or another individual was quoted, I started a new list. When I got to 3 Nephi, I wished I had started looking for unique words when I began typing 1 Nephi. After a few days of indecision, I felt I had to go back. I stopped typing at the last chapter of Helaman and went back to read 1 Nephi (I didn’t think I needed to type it again) through Mosiah 28, watching for possible unique words, checking them in the scripture program, and, if they were unique, adding them to my lists. When I reached Alma, I skipped forward to 3 Nephi and typed until Moroni’s final words, along the way adding to my now very long lists of unique words. In the end, I had more than 1,700 words organized on a spreadsheet, not including proper nouns, which would add many more words, as I was soon to discover.

Of course, this experience could not have happened without a computer. When I was in the middle of typing and making the lists, my visiting teacher and dear friend Leslie Goodwin was going through a box of old books. When she opened the box and read the title of the book that was on the top, she felt she should give it to me. The book, by J. N. Washburn—The Contents, Structure and Authorship of the Book of Mormon—was published in 1954. I was amazed to read that Brother Washburn had a similar idea come to him that somehow the specific words of the Book of Mormon were evidence of its truthfulness.

With no computer to help him, he chose twenty-five religious words and twenty-five nonreligious words to track through the Book of Mormon. He said, “I then read the Book of Mormon entirely through and kept a careful record of the recurrence of those fifty words.” After finishing this experiment the data was inconclusive. He said, “Just how significant this little experiment was I cannot say, but it seems to suggest something of value” (Salt Lake City: Bookcraft, Inc., 1954, 77–78).

In 1829 when the Book of Mormon was translated and in 1954 when Brother Washburn gathered his data, few people on earth had an inkling that a device would be invented that could almost instantly display how many times a word is found and jump to the exact spot where that word appears in the text.

Sitting at my desk and looking over my extensive list of words and knowing there were many more yet to be found, I felt awe, and I knew more than ever before that the Book of Mormon cannot be explained away as the work of one or several nineteenth century authors. No man or woman, including Tolstoy, Tolkien, or Twain, could use unique vocabulary for about fifty individuals and simultaneously create a manuscript that has almost the same exact ratio of unique words to total words as does the Bible. (This idea will be explained later.) I had long before received a spiritual witness that Joseph Smith did not compose the Book of Mormon. Now, based on the evidence of hundreds and hundreds of unique words, I concluded that Joseph did not even use his own words in translating the Book of Mormon.

I just turned 50 and all my life I've felt the gentle whisperings of the Spirit each time I read from the Book of Mormon that it is true. It just feels good, right, enlightening, loving, etc, and I never could understand how anybody could think that Joseph Smith or any other individual could have written it. For a number of years I had been feeling like I should make a recording of myself reading the Book of Mormon, then in the October 2011 General Conference when Elder Richard G. Scott mentioned that he had done that for his family as a Christmas present back in 1991 I decided again it was time to do the same thing. It took me a few years to finally begin, but I started earlier this year and I am now at the end of the Book of Ether. It's been very interesting to me how much more obvious it is that were many different authors/contributors each with their own unique writing styles when you read the book aloud, in a somewhat condensed period of time, while trying very carefully to not mess up. Thanks for a great article!

Brilliant way of studying, now lets get typing.. Thank you for your uplifting story