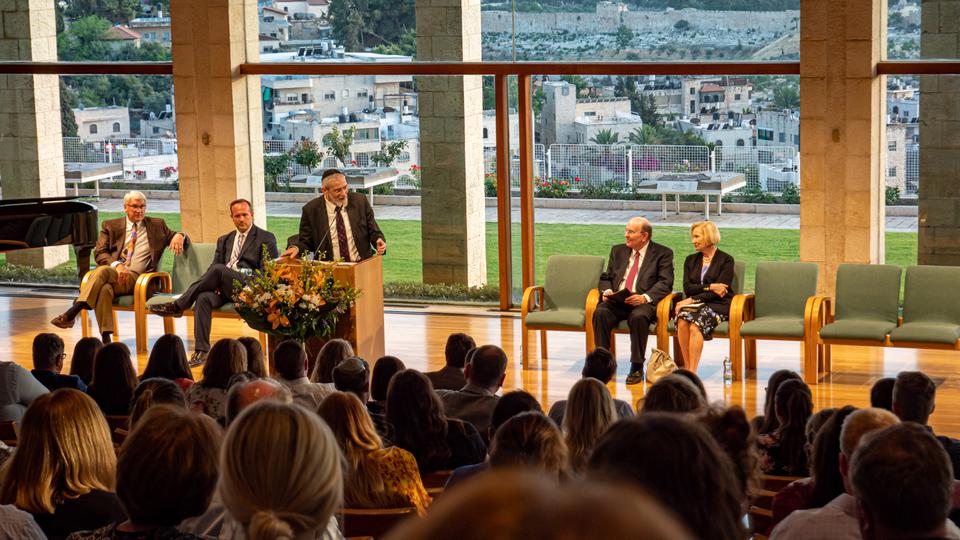 Speaking Wednesday evening from the auditorium of the BYU Jerusalem Center, with its breathtaking panoramic view of the Old City visible through the background windows, Elder Quentin L. Cook spoke to a group of Latter-day Saint and Jewish scholars about the importance of interfaith dialogue to build understanding and respect.

“It is a time to listen to one another and learn from one another,” Elder Cook told the interfaith group at the semiannual Jewish-Latter-day Saint Dialogue (now in its third year).

Read the full transcript of Elder Cook’s talk, titled “A Time to Listen and Learn.”

Elder Cook also spoke about four areas of common ground shared by the Latter-day Saint and Jewish communities. Those areas include a fundamental focus on family, a high value on education, a strong commitment to charitable giving and humanitarian outreach, and higher levels of happiness and optimism. (Read more about each area.)

“It was interesting that all three of them had several Jewish children among their closest friends,” Elder Cook said. “Our children found their Jewish friends had similar commitments to family, and it felt comfortable to be with them. Each of our children attended several bar mitzvahs and bat mitzvahs when they were 13 years old. They quietly cheered on their friends as they recited passages from the Torah as part of their religious duties and responsibilities.”

Elder Cook shared a scripture (Moses 7:28–37) from the canon of The Church of Jesus Christ of Latter-day Saints that provides a unique view of God — namely, of a loving, sympathetic God who may weep when we suffer. The Apostle told the interfaith group that the verses show a Heavenly Father who most certainly sheds tears over acts of unspeakable brutality, including the Holocaust.

In the quoted verses, a prophet named Enoch sees God weeping because of those who “are without affection” and “hate their own blood.” “Should not the heavens weep, seeing these shall suffer?” God asks Enoch.

“This seems to indicate that it is not just His children’s wickedness but their ‘misery’ and not just their disobedience but their ‘suffering’ that cause Him to weep,” Elder Cook said. “To me, this scripture provides a window into God’s heart, mind, and soul — He is our living, loving Heavenly Father, and we are His children. He weeps with us as we suffer and rejoices as we do what is right in His sight. In my mind, I can imagine the tears shed as a result of the Shoah, or Holocaust. He is a God of empathy who does not have a hand in what causes the suffering. He is the great consoler.”

The senior Church leader concluded with a blessing upon those present.

Read the full transcript of Elder Cook’s talk, titled “A Time to Listen and Learn.”

I have enjoyed much interfaith contact - many events, many opportunities, shaking hands with ministers, rabbis, muslims, even a national leader, having interesting respectful conversations and being told some amazing respectful things. We do not need to give up our own doctrine or belief to grow to understand and respect another. It's better than going forever according to some rumors unfounded.