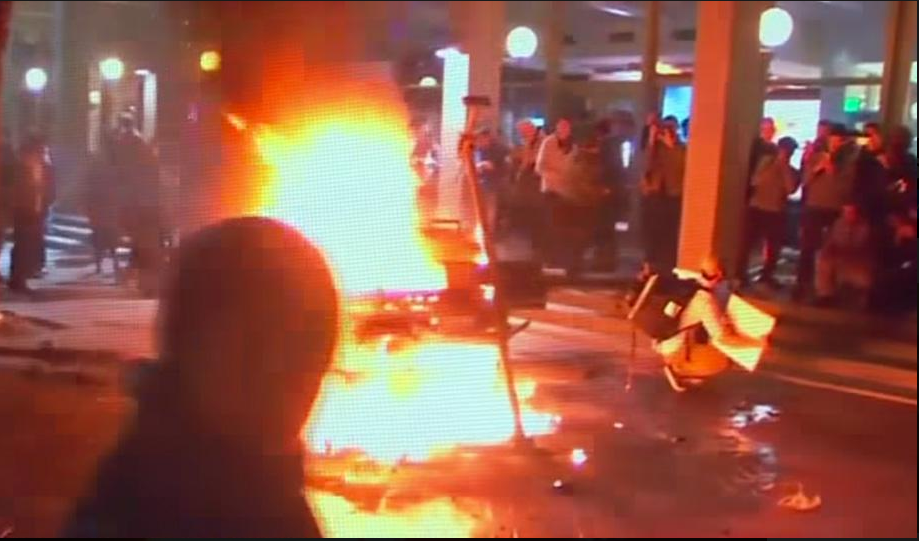 The following was published late last week on National Review in response to circumstances surrounding an event held in Berkeley, CA.

In the United States of America, rioting to stop free speech is unlawful and reprehensible. Period. Full stop. It’s not “understandable.” It’s not excusable. There should be no tolerance and no sympathy for people who pepper-spray young women, beat bystanders senseless, and tear up property because they’re mad that another human being is speaking.

Last night’s spectacle in Berkeley, Calif., was disgraceful. In response to a planned speech by Breitbart’s Milo Yiannopoulos, a “peaceful” protest turned rapidly violent, and by late evening on the East Coast, television and Twitter were filling up with images of people and property being attacked by black-clad thugs, part of the so-called “black bloc” and “antifa” (anti-fascist) movements.

For those who don’t know, the black bloc refers to the practice of gangs of rioters who show up to protests clad entirely in black (often armed with bats, Molotov cocktails, and other weapons), hide their identities, and move as a group to attack people, destroy property, and intimidate the public. A media that’s intent on whitewashing their growth and influence often refer to these gangs as just a “few dozen” malcontents, the tiny few who pollute otherwise-peaceful movements.

The visual evidence, however, can show how the media understates their size and their actual role in left-wing protest. Look at the image below, taken last night:

What you’ll notice (and what you’ll experience, if you ever find yourself in the middle of violent left-wing protest) is that the rioters and the “peaceful” protesters have a symbiotic relationship.

If we are not careful and come to an agreement with both sides of the political spectrum, we will be rushing headlong into anarchy!!!

It's easier for the National Review to forget history when trying to make a political point. Pres. Obama's time in office came with effigies of him hanging from nooses in kentucky, Washington, and Maine, for starters. After Pres. Obama's election win, there was rioting at least in Pennsylvania, Texas, Mississippi, and North California. A black church was burned in Massachusetts. People were sucker-punched and roughed up violently in Trump rallies during the campaign. Candidate Trump called for a "revolution" (his word) when Obama was re-elected in 2012. Hate crimes against minorities were committed by Trump supporters all over the U.S. after they felt emboldened by the results of the election. Memory is short, especially when we filter it to support our preexisting views.