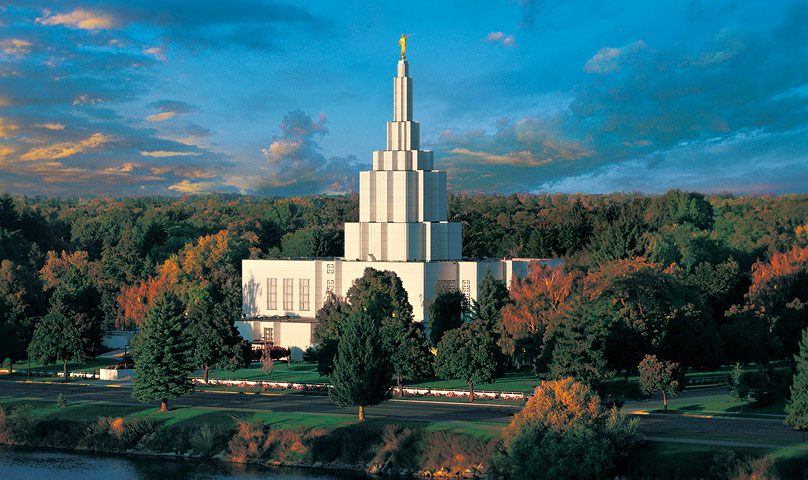 I Did it Just For Your Mother

With Mother’s Day quickly approaching, we thought this story about Larry’s mother was particularly appropriate.

Hanging on the wall of my home is a large painting of Christ in Gethsemane rendered on purple velvet. It arrived shortly after my mother died in 1987. Someone had taken it down from the place where it had hung in the Idaho Falls temple for over twenty years then stored it in the basement of the temple. Later, my sister requested that it be returned to the family.

My mother had painted it when I was a youth. Previously, she had painted many pictures depicting sacred subjects, most of which ended up in our ward house in the Boise 5th Ward Junior Sunday School room or in the foyer outside the chapel. Such practices were common in the 1950s and 60s. Each week when our family went to church, I saw Mom’s paintings, which taught me more about gospel truths than any sermon I can remember.

It was during that period in her life that Mom determined that she would attempt something extraordinary through art that was to become that fullest expression of her testimony. This project was to fulfill the sum of her spiritual yearnings, the fullest extent of her belief, and the crowning artistic statement of her life. She chose for her subject Christ in Gethsemane with the intention of displaying it in our home as a gift to her family.

Recently, Mom had read of a technique of painting on velvet rather than canvas. The idea rang true to her. In her mind’s eye, she envisioned the painting as elegant using this backdrop: the perfect way to display a sacred subject.

She purchased a purple swath and went to work. For the next few days, I watched in fascination as she built a frame, stretched the velvet over it, and carefully sketched figures. Then began the long, tedious work of painting Jesus in the Garden.

She set up shop in the kitchen of our little home, because that area of the house had more light and because, as homemaker, she spent so much time there. Her effort became days then weeks. She was in no hurry; every stroke mattered.

Each day when I came home from school, I would sit on a chair next to hers and observe for hours the progress. I observed how she squeezed thick paint out of tubes and mixed it on a palette. I watched her face shift from deep concentration to relaxed tranquility. I saw her struggle over details and settle into a fluid rhythm. I can safely say that I witnessed almost every stroke of her brush as she attempted to interpret her testimony and give it life.

When time came for her to paint the Savior’s hands, she asked me to pose, one hand over the other, and strike a position that she imagined Jesus would have taken. Imagine! My hands became Jesus’ hands! That was a lesson I never have forgotten as I have given priesthood blessings and served over the years.

At long last, Mom finished her masterpiece, and she and Dad hung it in our living room. But it wouldn’t remain there long. Boise was a little Idaho town then. With only two stakes, word spread fast among the members about the beautiful painting that my mother had created. It was supposed to have belonged just to our family, but within weeks, the painting migrated from our house to the ward building to the stake center at the request of our bishop then our stake president.

Shy about praise, Mom deflected the honors as best she could and focused on being submissive to the requests of her Church leaders and the good that her painting might provide to others.

The honor was beyond anything that any of us, especially my mother, could have imagined. We were to learn that approving a painting for placement in a temple is an involved process. One significant step was when the temple president asked Mother to write her testimony and her experience and address them to President McKay.

When I think back on the events of those months, I find it difficult to describe how our family reacted to the painting’s meteoric rise in prominence. We had never experienced so much attention. For a moment, I suppose that we thought life couldn’t be better.

Mother would not be able to deliver the painting to the temple. My aunt and uncle took the painting there instead. Remarkably, the picture was placed immediately outside the celestial room, where all the patrons passed in departing that most holy place. But it would be years before Mom would see it there.

From the moment she completed the painting and wrote her testimony to President McKay, her life began to spin out of control. For the next twenty years she felt that she could not return to the temple until she could pull her life together. Only a year before she died did she see her beautiful painting hanging outside the celestial room of the Idaho Falls Temple.

In the meantime, like an old sweater wearing away thread by thread, my mother’s life began to unravel. Nearly everything that she held of value was threatened or taken away. After the birth of her fourth child, she suffered health problems that resulted in an early hysterectomy that left her shattered. In those days, the science bordered on barbaric. She was given no hormone replacements, so to ease the symptoms of sudden menopause and stress, the doctors prescribed drugs then more drugs and even more until she was taking hands-full daily. Soon, her health was seriously impaired, and she became addicted.

Her precious marriage collapsed. She had no employable skills, so the jobs she could land earned her little money to rear her youngest children. Her feelings of self-worth plummeted.

So did her feelings of spiritual worth, which prevented her from approaching the bishop for a temple recommend. Consequently, every time each of her four children was married, she stood outside the temple and waited.

Finally, she was hospitalized and nearly died as she put her life on the line to rid herself of the addictive prescriptions.

For twenty years, all that she had wanted was to get her life back and to see her children happy. And those desires were answered. She conquered addiction to prescription drugs, gained skills and employment in an alcohol and rehabilitation center, and taught classes to children of alcoholics. She had an affinity for handicapped children and volunteered to teach them to swim and help them with physical therapy.

Through all the suffering, the tragedies and the setbacks, and despite the fact that she had been denied so much, she never lost her testimony. She attended church every week and faithfully led the singing in sacrament meeting.

She remained true in the face of unimaginably difficult tests.

Now addiction-free, she felt that she could return to the temple and see her beloved painting. She was 58 years old. A few weeks later, she became very ill with what was later diagnosed as pancreatic and liver cancer. Within four months, she was gone. Shortly thereafter, someone at the Idaho Falls Temple made the decision to remove the painting and place it in storage, and later my sister retrieved it.

The painting has hung in my house since that time, and once in awhile, I recount its history to my children. I tell them about their grandmother and all that she went through to express her testimony through art and stay true to the gospel and her God.

After one of those recitals, perhaps two weeks after I had hung the painting in our home, I stood before it alone one night as I contemplated its fascinating journey. Suddenly, a singular thought crossed my mind: This painting wasn’t all that spectacular. I was ashamed of myself for thinking such a thing, but it was true.

I had spent most of my adult life working with LDS artists, authors and composers, some of the most creative minds in this dispensation. My mother’s painting just didn’t measure up for the honors that had been lavished upon it.

Why, I wondered, had this particular work of art attracted the attention of people in high places? Why had this painting been chosen to reside in the most holy and prominent location in the Lord’s House? What was so special about this painting that caused it to touch the lives of tens of thousands of people over the course of two decades?

As I stood puzzling, a whispered answer came powerfully into my mind: “I didn’t place the painting in the temple for everyone; I just did it for your mother.”

What a fool I was! Throughout my entire life I had thought that Mother’s painting had been created for the masses and placed in the temple to inspire countless patrons. I had discounted completely the Lord’s personal interest and love for my mother. He had foreseen the trials that were in her future, so He took her testimony and anchored it in the temple. Throughout her long ordeal, despite the storms, she always looked toward the temple and knew where her testimony was secured.

Then, when she died, the painting came down. It had served its purpose.

From that moment to the present, I have never discounted the Lord’s personal awareness or care for his faithful, suffering children. By virtue of his infinite foreknowledge and love, He often intervenes in advance and anchors testimonies to covenants and promises and to the assurance of deliverance and the hope of salvation.

While it is true that others may benefit from the Lord’s actions, it is also a truth that He never loses sight of the one.

He is missed, I have enjoyed so many of his articles.

Could you post a picture of the painting for all of us to see please?