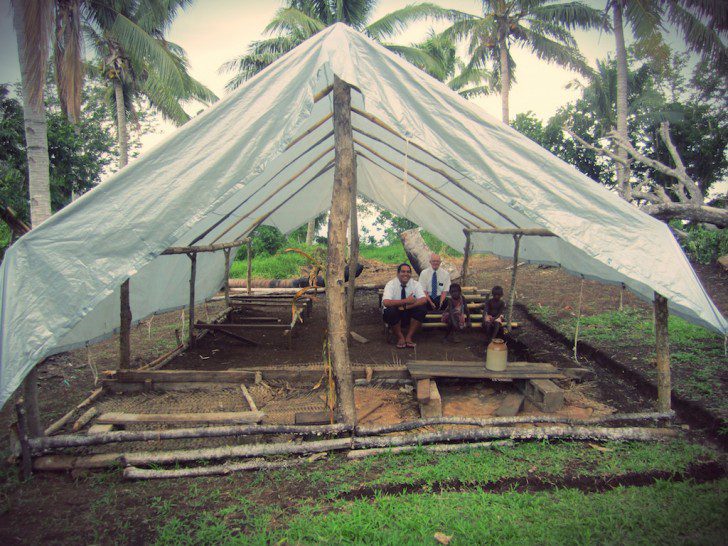 How We Baptized a Whole Village

Elder Tanner Tupou from Australia thought his Aussie roots would guarantee him an easy mission in a big city “and an air conditioned Toyota Corolla.”  He was stunned, and not in a good way, when he read the words “Fiji Suva Mission, with assignment to Vanuatu.”

“I never wanted to serve anywhere but Australia, I couldn’t imagine anything worse than mosquito ridden survival treks and third world living in the blistering sun. I had hoped that my craziest mission experience would be riding a push bike in a suit”.

He accepted the call and arrived in Vanuatu just after Cyclone Yasi. Tupou said, “On exiting the plane, the extreme humidity and heat was no welcome party, but I knew this would be my home for the next two years, so I had to get used to it and make the best of it.”

The Church in Vanuatu was very different from his large ward in Sydney. “Often we would be running a small branch or helping to build, something or other, this was a pioneering mission in a district, not a stake, and just as I thought, no air-conditioning, but I got used to it”.

Just as soon as he got comfortable in Vanuatu, he was transferred to the even smaller island of Tanna. This island contained just six missionaries, who looked after 4 branches.

It wasn’t long before a tall, shoeless, Ni Vanuatu (local) man arrived at their home. “Missionaries, my name is Issac and I am the unit leader for Green Point.”

The missionaries had vaguely heard of “Green Point” and knew that no one had visited there for possibly five years. Elder Tupou described the journey to the village as “a mountainous and rugged dirt road that looked like the filming location for an off-road truck commercial.”

Issac had walked twelve hours to ask the missionaries for some help. The recent cyclone had destroyed villagers crops and homes. He only wanted a few bags of rice and some tarpaulin.

The missionaries immediately called the office in Vanuatu who told the them to go out to Green Point and assess the situation. “We had no idea what we’d find, as exciting as it was, we covered three branches, and there was plenty of work for us to do closer to home.”

That Sunday they took an off road vehicle out to the village. They were amazed at what they saw. Issac greeted them and lead them to church. “He took us to a bamboo structure with a palm leaf roof, we expected to see about three or four people.” Instead they were greeted by a ninety person congregation, half baptized members, half investigators. “It was totally surreal, I couldn’t figure out how they’d grown to this extent without missionaries,” said Elder Tupou.

“When Issac started church, I was worried he’d stray from church guidelines, it had been about fives years since he’d had contact with church leaders. I didn’t even know if he’d received any training. I honestly expected to hear some false doctrine and see some strange practices. But I decided to let it play out and just observe.”

Issac started the meeting and carefully reached into his pocket and pulled out a worn piece of paper neatly folded in four. He handed it to the brethren in the white shirts. It was the sacrament prayer, written by missionaries more than five years previous.

Elder Tupou said, “When I saw that piece of paper, I felt the spirit confirm how special these people were to God. When I heard them singing the sacrament hymn, ’There is a Green Hill far way” I couldn’t hold back the tears.”

The missionaries left totally overwhelmed by their experience. They returned with food, shelter resources and started teaching members of the congregation who had been faithful for years, waiting for missionaries to come to baptize them. Elder Tupou baptised over forty people in less than one month. “They were some of the most prepared, well taught people I’d ever met. I will never forget those baptismal services.”

For more details and pictures from this incredible story, visit Mission Geek.

What a wonderful story! It brought me to tears. Thank you.

What a beautiful story.