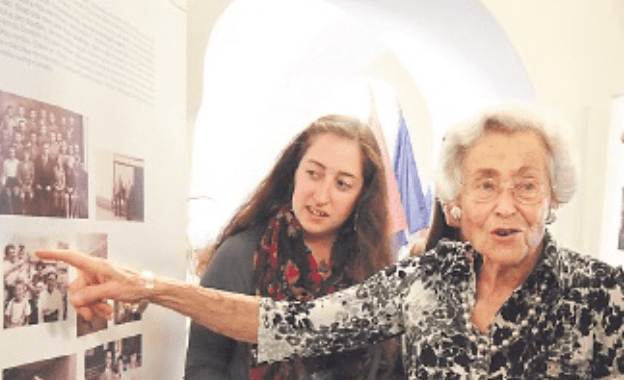 Margit furiously peddled toward Southern France. The Germans had maneuvered around the Maginot Line by slipping in the through the Ardennes Forest and Belgium. Now they were thundering toward Paris. World War II was now knocking at Margit’s front door.

France’s propaganda had succeeded in dismissing the German threat from Margit’s mind. The Maginot Line would hold; or so she thought. There was no danger. Now that seemed like a dream. Here she was in this unfathomable situation – an Austrian born, Jewish teenager who was alone in Paris with the German Army nearly upon her. All she knew was her mother, who had an Austrian passport, had been taken by the police several weeks prior and sent to the South of France. So, with the few funds she possessed, Margit bought a bike and pedaled south.

Margit was a superlative, independent 86-year-old when I met her in 2008. Her silver hair and petite frame could not diminish her competent, intellectual stature. Nothing about Margit hinted at frailty even upon a brief encounter. Walking daily and hiking most weekends gave her the ability to out pace the youth, and at age ninety, during my exercise class, she consistently held a perfect plank for over a minute.

The scene from Margit’s life above happened decades before we met, yet, had an enduring impact not only on Margit, but all who knew her. Through her “eyes” and tenacious efforts to leave her heritage embedded in memories, I “saw” her evolve from a WWII Jewish refugee to an entrepreneur, advocate, champion for social justice, author, and docent for the United States Holocaust Memorial Museum.

Often leading tours for the Holocaust Museum for friends, family, and foreigners, myself and some of my family members were privileged to be among them. I personally knew her to be fluent in six languages which made her invaluable as a docent; Czech, English, French, German, Hungarian, and Spanish were the languages I was aware she spoke, and experienced listening to her fluidly go from one to another. Speaking with her during her 90th Birthday Celebration, Margit told me she had recently hired a Russian tutor. This was the one language she studied long ago but never mastered, and now she was determined to do so.

Margit had a gift of connecting people. She embraced and influenced a vast number of people over all socio-economic lines. She had a knack for detecting the value or skill in a person, remembering it, and when opportunity knocked, introduce them to someone who needed them. She was so open and honest with her life that no question was barred. I took advantage of that on occasion, especially during walks through our neighborhood.

In the scope of Margit’s accomplishments in just the area as the guardian of her family’s heritage, I did very little. She would call me with projects such as organizing photos on her computer, creating memory books on internet programs, scanning years of her family’s annual letters, helping her create posters, and organizing certain genealogy records. These contributions were always appreciated, yet minuscule to the insurmountable work Margit did.

Margit was an example of a wise and diligent steward over her family’s heritage. She passed it on freely with the fierce determination that seemed part of her nature. She published her autobiography, “Margit’s Story”, at age 80 due to the persistent urging of her family. Later, she took her granddaughters to the lands of their ancestors, organized and participated in multiple family gatherings, and seemed to always pack a family book or treasure as a reminder of where their roots were laid.

My thoughts turned to Margit this past February on our birthday. We were 38 years apart to the day, a fact I’ve always been proud of. This did not deter us from becoming timeless friends who shared experiences. 2020 is the first year I have celebrated without Margit being here. She slipped through the veil of life July of 2019.

I was not surprised that Margit’s obituary noted, “She worked hard to bring and keep her extended family together; last December (2018), she presided over a family reunion in her native Austria attended by more than 60 people spanning four generations from three continents.” (Margit Meissner, legacy.com; obituaries; Search Notices & Guest Books, The Washington Post)

Now that you have met Margit, imagine what would have been lost had she not shared what she experienced during her life’s journey. Even with all she did, Margit admits to having procrastinated until she was nearly 80 before she wrote her book. In the introduction she states, “I HAVE TO THANK my children and my nieces and nephews for having urged me, then pleaded with me, to write our family’s story. They nudged me for years about sorting out the boxes with family letters . . . organiz(ing) and annotating the many photographs that cluttered my closet. I am now grateful for their insistence.”

Even though you may not have peddled toward the South of France with the German Army on your heals, Margit would be the first to tell you that your story is unique and of great value. Through her story, may you be inspired to begin capturing yours or perhaps, see what you’ve already been doing as an entrusted steward of your family’s heritage.

Stories like Margrit’s are precious and timeless! Thank you for sharing about her life and your connection. It is inspiring to hear about those who persevered against seemingly hopeless odds.

Yes! I'm happy to report that we have completed our personal and family history, photos, timelines, etc. and distributed to all our posterity! It's a worthwhile journey that takes a while to complete!