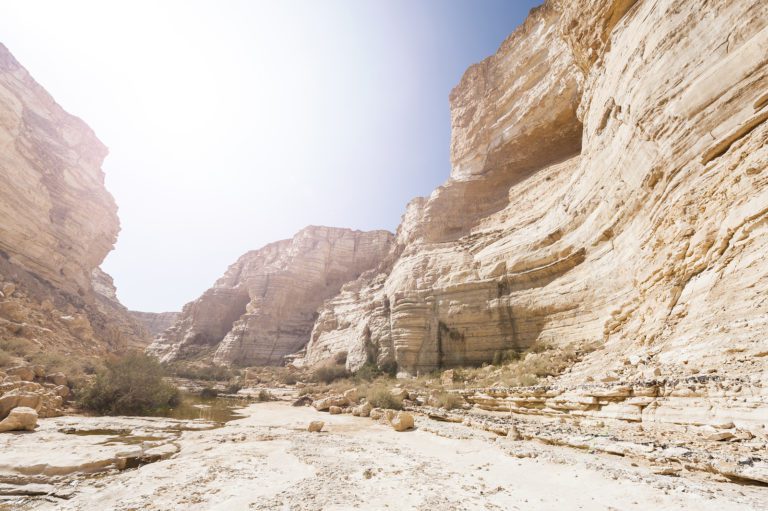 How the Geography of the Holy Land Has Affected its Destiny

Editor’s Note: The following is a passage from a manuscript still in progress. To read more passages and insights from Daniel Peterson, visit his blog; Sic Et Non.

From its earliest days, Israel has felt itself linked to a par­ticular piece of land. This is important for many reasons. For one thing, much of the story of Israel recounts its efforts to acquire the land in the first place, along with the warnings of the prophets about losing it and the dream after one exile or another of return­ing to it. Many of the messages of the prophets deal with Israel’s worthiness or lack of worthiness to possess the land, as well as with the future of the land—whether that future was darkened in the short term by the wickedness of the people or glorious in the long term because of the mercy and power of Jehovah. This rela­tionship between land and people helped to form Israel in many ways. I think it important, too, to notice which land it was that God appointed for his covenant people. He could have given them a nicer place.

For all the talk of a land “flowing with milk and honey,” Pales­tine is a relatively difficult place to eke out a living. Tahiti might have been nice, with fruit just waiting to be picked. Switzerland is far prettier. Even in the Near East, there are places where it would have been much easier to live a peaceful life. Take Egypt, for instance. With a regular and predictable river running gently through it, separated from would-be enemies by harsh deserts but itself enjoying the lushness of the Nile Valley, Egypt, by the standards of the ancient Near East, was a wonder­ful place.

Palestine, on the other hand, was the highway that nearly every Near Eastern con­queror took to get to his next trophy. President Gordon B. Hinckley once called it, quite accurately, “the bloody doormat of the eastern world.”[1]Why did God put his people there? I think it has to do with the development of character. Goethe noted that, while talent is developed in stillness and quiet, character is developed in the stream, or torrent, of everyday events.

Today the Lord asks us to be in the world, while not of it—to be actively involved in making a liv­ing, in raising a family, in marriage—and doesn’t allow us the sometimes tempting alternative of withdrawal to a nice, quiet mon­astery. So did the Lord plant his people in Palestine, rather than in some more peaceful and pleasant land. We humans seem to need some discomfort to prod us to great achievements; neither Tahiti nor Switzerland has yet produced a great literature. God’s concern with the literal soil of Palestine was also reflected in his attention to the way the people behaved on it and in regard to it.

It strengthened the passion of the Israelite prophets for proper behavior, for righteousness. Judaism was to be a religion interested in this world, not just in the next. Unlike Buddhism and Hinduism, which encourage us to escape this world, Judaism teaches that this world is—or, at least, can be—sanctified. “And God saw every thing that he had made, and, behold, it was very good.”[2]Righteousness could dwell upon this earth; a sanctified society could be built here. It would be a literal place, with physical struc­tures of brick and stone, not merely a spiritual abstraction.[3] Some­day, the Messiah would purify Israel and glorify Jerusalem. The prophets sought, not escape, but the blessing of the Lord upon them and their people in this world as well as in the next.

Far from seeking a timeless Nirvana, the Hebrew scriptures pronounced time to be holy. “And God blessed the seventh day, and sanctified it.”[4] Their very positive attitude toward the world, and toward time, almost guaranteed that the Hebrews would take history seriously. God, they were convinced, revealed himself in this world and acted in this earthly time. And it was their religious duty to record those revela­tions and mighty acts. As Paul Johnson points out, the Jews

were the first to create consequential, substantial and interpreta­tive history… [T]hey were fascinated by their past from very early times. They knew they were a special people who had not simply evolved from an unrecorded past but had been brought into existence, for certain definite purposes, by a specific series of divine acts. They saw it as their collective business to deter­mine, record, comment and reflect upon these acts. No other people has ever shown, particularly at that remote time, so strong a compulsion to explore their origins. The Bible gives constant examples of the probing historical spirit: why, for instance, was there a heap of stones before the city gate at Ai? What was the meaning of the twelve stones at Gilgal? This pas­sion for aetiology, the quest for explanations, broadened into a more general habit of seeing the present and future in terms of the past. The Jews wanted to know about themselves and their destiny. They wanted to know about God and his intentions and wishes. Since God, in their theology, was the sole cause of all events—as Amos put it, ‘Does evil befall a city unless Yahweh wills it?’—and thus the author of history, and since they were the chosen actors in his vast dramas, the record and study of histori­cal events were the keys to the understanding of both God and man. Hence the Jews were above all historians, and the Bible is essentially a historical work from start to finish.[5]

The people of Israel were not great craftsmen, or painters, or architects. But writing was their national habit, almost their obsession. They probably produced, in sheer quantity, the greatest literature of antiquity, of which the Old Testament is only a small fragment… [They] saw literature as a didactic activity, with a collective purpose. It was not an act of personal self-indulgence.[6]

[1] Cited by Truman G. Madsen, in his foreword to Baldridge, Grafting In, i.

[2] Genesis 1:31. It is beyond the scope of this book, but I would like to suggest, even if I cannot develop the thought here, that Latter-day Saints share this positive evaluation of the world. We do not dream of “escaping the body,” and we are not inclined to ascet­icism. There are no Mormon monks. See Daniel C. Peterson and Huston Smith, “Pur­pose of Earth Life: Comparative Perspective” in Daniel H. Ludlow, ed., Encyclopedia of Mormonism (New York: Macmillan, 1992), 3:1181-83.

[3] Latter-day Saints too have their attachment to a land. There is Utah, “sacred home of the prophets of God” in the words of the hymn. Even more, there is the New Jerusalem, someday literally to be built of actual brick, steel, glass, boards and stone. It is not a mere spiritual abstraction. And if Zion means “the pure in heart,” as it does (Doctrine and Covenants 97:21), it also signifies a literal place. Interestingly, some nineteenth- century critics of the Church thought it too concerned with fields and barns and fences to be truly “spiritual.” Nowadays, one occasionally hears the criticism from liberal Prot­estant and Catholic theologians that Mormonism is too concerned with the next life; they themselves, having often abandoned their belief in transcendent matters such as life after death, now focus on religion as a tool for social reform. Amidst the fashions of the world, however, the Church goes on its way. It sanctifies the world of work and everyday life, teaching that cleaning one’s yard can be an act of worship, while at the same time it regards the life to come as a literal reality. Like their predecessors, modern prophets teach a balance between this life and the next. The two are, after all, not so very different.

How much of the land was changed at the death Jesus Christ? Was the land more green then?

There is always a new nugget of insight in Peterson’s articles. Love them!