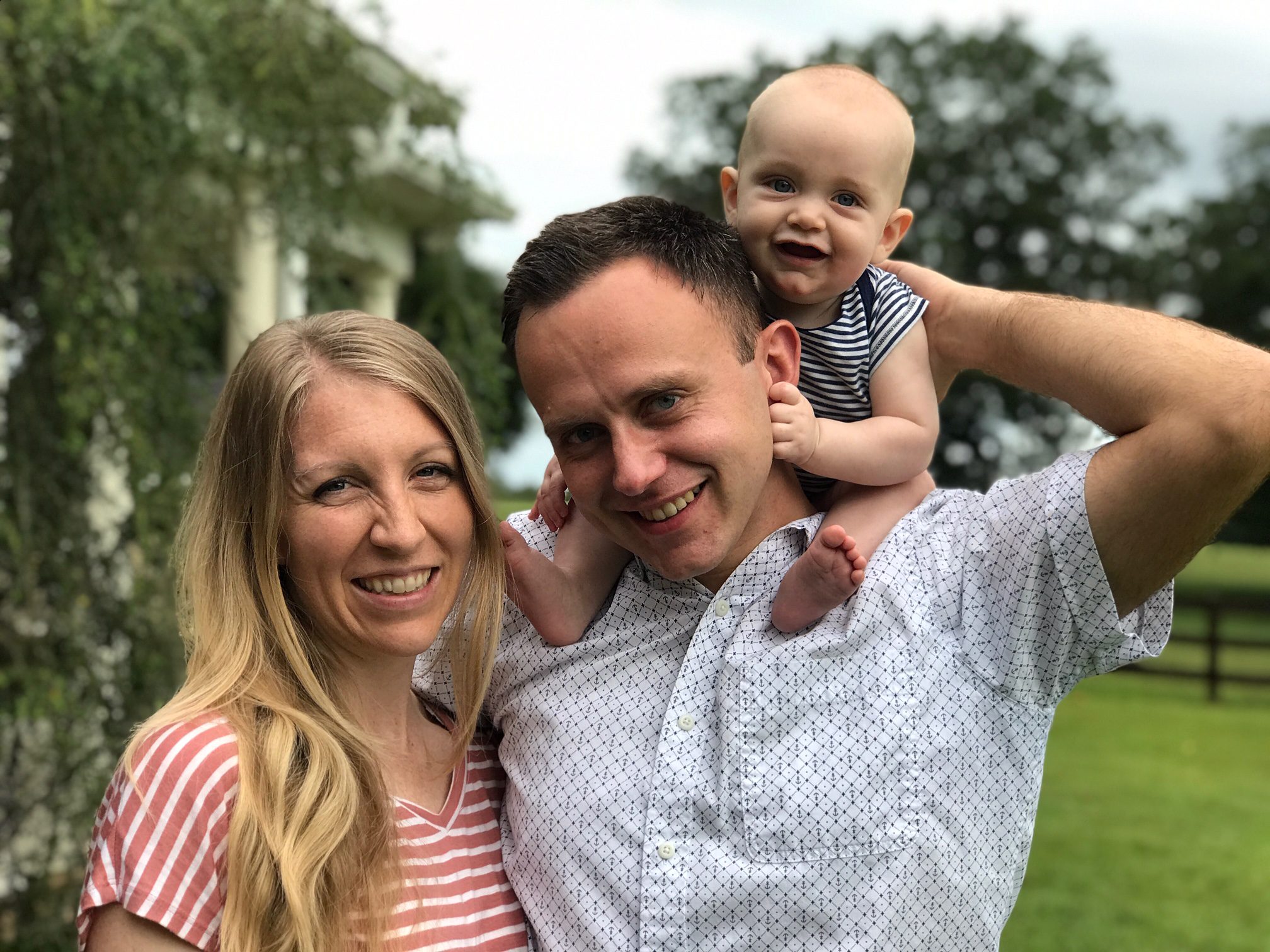 When Heidi Kriser Kuns left for the Berlin Germany Mission in 2013, she told the Lord she would give it her all on her mission, asking in faith for one blessing specifically: that her 26-year-old sister Whitney would find someone to marry while she was gone.

Whitney had graduated from Brigham Young University in 2012 and desired so much to be a wife and mother, but with all the dating she had done at college, she had not found someone she wanted to marry. It wasn’t easy for Whitney, especially seeing so many peers around her getting married. She was losing hope and wondering what God’s plan was for her. How long would she be single for?

Through the months of May and June as Heidi learned German and adjusted to her mission, instead of praying for herself, Heidi prayed constantly and fasted weekly for her sister. One evening, after an exchange with Sister Jardine, the two sisters sat at a table in the apartment and Sister Jardine told Heidi that she could qualify for miracles—if she asked for specific blessings and acted in faith the Lord would work wonders.

Though Sister Jardine did not know the miracle Heidi was seeking for, Heidi took her words to heart and decided to pray more specifically for Whitney. As she pondered her hopes for her sister, she felt good about asking the Lord to help Whitney meet her husband in the month of July. It sounded a little bit crazy, even to Heidi, but somehow, she felt God really did have blessings ready for Whitney in July.

By the beginning of July, Whitney was dating someone, but they soon broke up. It wasn’t until the end of July that Heidi was sitting in church and began to observe Mark Feistl, a German recent convert of three months, sitting towards the front. Mark had jumped right in as a new member and was good friends with all the missionaries. He was already in the Stake Young Men’s presidency and had really immersed himself in the gospel. “Man, he’s amazing,” Heidi thought. “How old is he?”

After the meeting, Heidi went up to Mark and told him that she thought he and Whitney would be good friends and that he should friend her on Facebook. The next day, Heidi had an email from a confused Whitney asking who Mark was. Seeing he was from Germany, she assumed he was connected to Heidi. Heidi told her about him, and on July 30th, Whitney accepted Mark’s friend request, and he wished her a happy birthday.

Though Heidi had introduced Mark and Whitney, it wasn’t until October when Mark bought a plane ticket to go spend Christmas with Whitney and her family that Heidi put it together. She was riding her bike on a cool, crisp evening with her companion and realized, “Wait a second. They met in July!”

Mark and Whitney’s conversations on the phone had been spiritual and profound (Mark even mentioned wanting to serve a mission), but their time together over Christmas was when they began to really fall for each other. He kissed her the first night they were together and, though it was an extraordinary situation, Whitney’s family was open to the idea.

“Part of me was thinking logically,” Whitney said. “This just seems crazy. He’s from Germany. He’s a new convert. I don’t know if this is smart. But I was just feeling so much peace and so good about it. I felt like I couldn’t not move forward.”

In February, Whitney took the plunge to buy a round-trip ticket to Germany to see him. As she prepared for her trip, her roommate came to talk to her. “Whitney, do you love him?” she asked. Whitney responded, “Yes, I think so.” “Then why are you coming back?” It was an abrupt question from a friend and the person she lived with who fully knew the commitments she had to a housing contract and a job, but it was then that Whitney decided, against her normally responsible nature, to skip her return flight.

Whitney was in Germany for five months, and with permission from the mission president, Heidi got to go on splits with her sister on her birthday. While Mark finished his training and exams to become a police officer, Whitney lived with a German-speaking woman from one of Heidi’s wards and took German classes. Though she was there for Mark, she met a Brazilian man in her German class who she ended up helping to bring into the Church.

A few months into her time in Germany, Mark invited Whitney to have a picnic with him in Schlosspark on a Saturday afternoon. The weather was perfect as they set out their blanket and enjoyed some food they had picked out together. As they stood together looking out over the beautiful scenery, Mark held Whitney close and she could feel his heart beating fast. She realized what was happening and all at once, he got down on one knee and proposed.

They were alone together in the park and they were blissful. After Heidi’s earnest and bold prayers and Whitney’s years of wondering, they were engaged to be married. Not only was Heidi excited, but the whole Berlin Germany Mission knew about the couple and their unusual story.

But soon after their engagement, Whitney began to have the feeling that Mark was supposed to serve a mission.

“I was thinking about my mission [and] how much he had talked about wanting to go, and I knew the blessings of it and felt like it would be an eternal blessing that we would be grateful that he had done,” Whitney said.

By this time, Whitney was 27 and deeply desirous to start a family. When marriage and children were such righteous and timely goals, why was Heavenly Father prompting her to put it off another two years?

“I have always wanted a man who put God first, even above me,” Whitney said. “Ultimately, that’s what I wanted. Eternal marriage is only possible through God and if we both put God first. I wanted Him to be first in our marriage and our lives, and I felt like that was an important way to put Him first.”

So, a week before Mark’s 26th birthday, he submitted his mission papers. They were together when he opened the envelope, and he was called to the Cape Town South Africa Mission. Due to visa waiting issues, he was reassigned to the London South Mission.

Whitney anticipated the two years being long and hard when they were together, but once Mark left, their time apart was more refining than she could have imagined. Having such limited contact sometimes made Whitney doubt her own conviction about getting married, but the time also taught Whitney that when we move forward with faith, God will bless our decisions.

Whitney and Mark got married exactly one month after he returned from his mission in the Orlando, Florida Temple. Their wedding day was a day of rejoicing—for Whitney and Mark and their reunion as well as for Heidi, who had petitioned the Lord so earnestly for her sister. The perfect orchestration throughout the whole process has left both sisters looking back still learning lessons about the nature of Heavenly Father.

“When I asked God for that blessing, I just expected Him to make it happen while I was gone. Like, God please take care of this. Obviously, why would I think I would be connected with anything that would happen?” Heidi said. “I feel like God gets so much joy out of blessing us and letting us be part of the blessing as well…He didn’t just make it happen for my sister…He let me be an instrument in making that blessing happen, even though I was across the world.”

Now, Whitney and Mark have a son and twin girls on the way, and Heidi and Whitney are as close as ever.

“If I had sat down and tried to think of the absolute best-case scenario, I wouldn’t have thought of this,” Heidi said.

This story did not sit completely well with me. I do believe that prayers can influence good outcomes. This is scriptural. Think: Alma's prayers for his son that were granted. I also believe that all prayers are subject to the will and timing of God. Many people with great faith will pray and pray, and those prayers will not be answered in this life. Had this story not had the positive outcome that it did, it likely would not be a story.

I know this amazing family well, their father is the branch president in my branch in rural south Alabama. You can tell the entire family puts the lord first like Whitney mentioned. Can’t wsit to see the twins.?