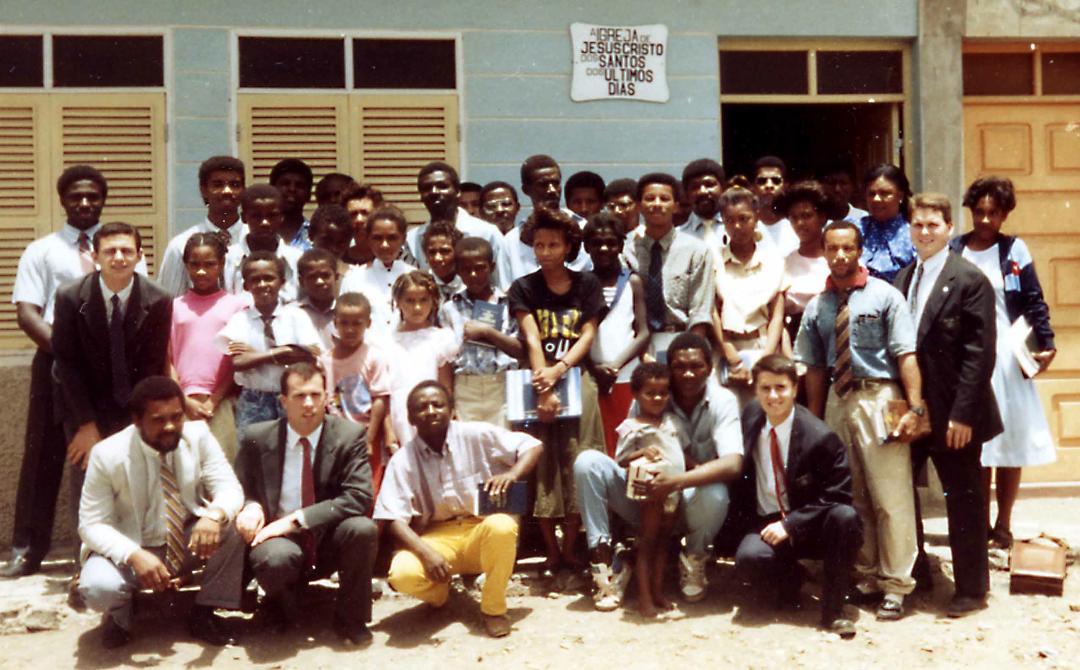 When the prophet announced the Praia, Cape Verde temple in the October 2018 General Conference, many people may have wondered where Cape Verde is. This tiny island country off the northwest coast of Africa is the home of 14,205 members of the Church of Jesus Christ of Latter-day Saints, 42 branches/wards, three stakes, and one mission.

Silvestre (Silva) Rosa was overwhelmed with gratitude and satisfaction when he heard the prophet’s announcement after the many years of work he had done to help establish the Church in Cape Verde. Silva can look back to remember when he was part of the first branch in the capitol of Praia and the very first missionary to serve from his country.

Only a few months after the missionaries first arrived in Cape Verde from Spain to begin building the Church, Silva saw the missionaries on the street. He knew they were representatives of some church, but didn’t know just how much his life would change when he went to the Church of Jesus Christ of Latter-day Saints on his own for the first time.

At the time, there were less than 30 members of the Church in the whole country of 340,000 people. The political climate with a communist government in Cape Verde made it difficult for the church to grow. Despite this environment and the skepticism of his Catholic family, Silva’s questions about the nature of God made for an immediate interest in the account of Joseph Smith and the Book of Mormon, and he was soon baptized in June of 1989 at the seaside, just 15 minutes from where the chapel was.

The small, faithful congregation stood alone in their country as the only Latter-day Saints—all brand-new converts trying to understand how the Church was run—and then the unimaginable happened. The two Elders serving in Praia from the Spain Canary Islands Mission had expiring visas and could no longer stay in the country.

All of the members were confused why the direction and support of the missionaries was withdrawn, but as tensions in the country rose with the fall of the Berlin Wall and the political changes occurring, the missionaries had no other choice. With no Church direction, the tiny branch survived by gathering together to read the scriptures and discuss. Silva didn’t know when the Church would return, but he knew the Book of Mormon was true and could not depart from the Church’s doctrine.

Six months later, missionaries from the Portugal Lisbon Mission arrived to a small group of faithful and relieved Saints and a county whose foundation was shifting. “1990 was a year of change in Cape Verde,” Silva said. As the Cold War impacted the world and the formation of the Movement of Democracy in Praia in April 1990 brought democracy to the country, the groundwork was being laid for the gospel to bloom in Cape Verde.

Silva was buoyed up by the new missionaries coming to the country and also desired to serve the Lord and share the gospel. In all earnestness, but with only a growing knowledge of the gospel and no idea of how to fill out the missionary application papers, he worked on his papers for 6 months until he was called to Portugal in October 1991—the first missionary to serve from Cape Verde.

As he prepared to leave on his mission, his father wanted him to meet with a Catholic priest one last time as a final attempt to convince him not to go. The priest discussed the Catholic doctrine with Silva and told him about the contradictions it had with the Restoration and the Book of Mormon. Before the end of the meeting, Silva had given the priest a copy of the Book of Mormon.

Being a brand new convert and serving a mission from a country with very few members of the Church was an exciting challenge for Silva. Though he was still learning to differentiate the variances between Church doctrine and the American and Portuguese cultures, his perspective and testimony broadened as he served.

Missionary work became more to Silva than knocking doors and teaching lessons. He wrote home to his family faithfully, and his father’s heart slowly softened to the point that he would want to read Silva’s missionary letters to everyone. By the time he returned to Cape Verde, two of his sisters had joined the Church. Not only that, but in those two years, the Church had grown from three branches to fifteen (200 people to 2,000 people), there was a seminary program, and the government of Cape Verde saw the Church as a good influence on the behavior of its citizens.

“I think that the system is respectful [of the Church],” Silva said. “Up until now, if you talk to the leadership of the country, they admire the Church a lot because of the charitable things we do [and] the helping with community work. The Church provides support for handicapped people and gives other medical equipment like glasses for students who can’t see too well.”

Silva moved to the U.S. in 1999 to pursue his education and remained there after college. With two seats designated for the Americas in the Cape Verdean legislator and five individuals to fill each seat, Silva ran and got elected as a representative for the Americas. He goes back to Cape Verde often.

On one of his visits to his home country, Silva met with the president of Cape Verde, Jorge Carlos Fonseca—a former college professor and founder of the only law school in Cape Verde—and felt like he should give him a copy of the Book of Mormon. “I had the idea of bringing the set of scriptures to him,” Silva said. “He was the best host and promised to read it.”

The government’s view of the Church is one of partnership, according to Silva, and he can’t wait to see how the Church develops as the temple comes to the capitol and more people become aware of the Church. “There are so many places in the world that the church has considered building a temple,” Silva said. “When it was announced that we were going to get a temple in Cape Verde, I felt so fulfilled. This is something we have hoped for and prayed for. It opens so many doors for the blessings.”

My husband and I served a humanitarian mission in Cape Verde 4 years ago. The church is still growing at an unbelievable rate. We feel it was a great blessing for us that we were able to serve those wonderful people!

Silva's work has continued in the United States! I served as his Stake President (Providence RI Stake) a few years ago when we created the first Portuguese speaking group in Central Falls, RI. That group shortly after became a branch, and that branch has flourished and grown! The commitment by members like Silva to help others prepare for the temple (one hour away in Boston) has made all the difference