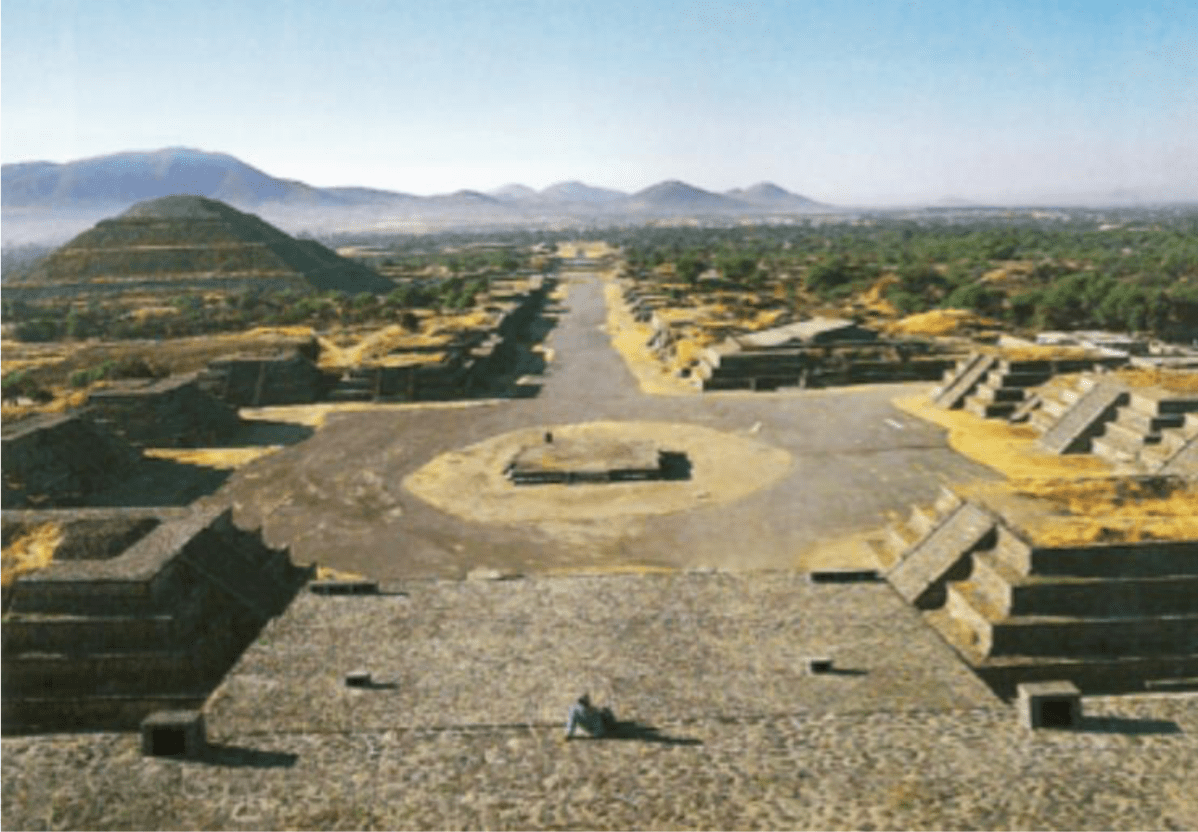 How Middle Eastern Measurements Built the Antiquities of Mesoamerica

Nephi states in 1 N 2: “I make a record in the language of my father, which consists of the learning of the Jews and the language of the Egyptians.” With this initial statement in the Book of Mormon, we know Lehi’s family was trained in the Egyptian language and culture at a time when trade was common among the countries of the Middle East.

“Clearly, since man began constructing things, he has measured. Standard measure is almost as basic as language for trade and developing civilization. Without it, trade would be chaotic, and development in the arts and sciences stifled. The familiar Near Eastern cubit – back of elbow down to finger tips-has been traced back to the third millennium BC in Egypt and Mesopotamia. Because arm lengths vary, a standard cubit arm length was set by ancient kings, and at times sculptured into their statues.”

For instance, the famous Gudea cubit, 49.5 cm or Royal Babylonian cubit is sculptured on a statue of Gudea, king of Lagish, dating to 2050 BC. Similarly, the Egyptian canon (52.5 cm) of human proportion was also employed so that different body parts were multiples or divisions of a standard unit.” These two Cubits were the predominant Near Eastern standard measures. [2]

We know that the Babylonian and Egyptian measurements were used in the building of structures in Israel and Judah:

In my Cubit Connection book (Norman 2018), two standard measurements are shown from Izapa, Mexico sculptures that appeared to be the measurements that were used in ancient Egypt and Mesopotamia. . . .After decoding the Izapa cubit standard measure, I examined the Middle Eastern cubits. And what did I find? The Royal Babylonian and Royal Egyptian Cubits were used to build the ancient Izapa, Mexico Temple Center (ca.500 BC)! This standard measurement study that began at Izapa, moved across Mesoamerica, then into North and South America – ongoing over the past three decades.

Izapa, Mexico’s Temple (ca. 500 BC) contains 100 + carved stone monuments. All were composed with the Middle Eastern geometry. Izapa Stela 4 (Fig. 5 right) shows 1) Center at navel, 2) Arm angles on diagonals of half square, 3) Legs align to top center, 4) Unit of measurement based on the forearm. [5]

“In 3,000 BC the Egyptian pyramids were built to be oriented to star cycles in the Milky Way. The

Observatories were constructed anciently throughout the Middle East. Moses states in Deuteronomy 4:19: “And lest thou lift up thine eyes unto heaven, and when thou seest the sun, and the moon, and the stars, even all the host of heaven.”

Ancient observatories were built from Egypt to Israel and to southern Arabia into Yemen and Oman, along the Frankincense Trail. At Salalah, Oman in 2006, Dr. Ali Ahmed Al-Shahri took our group from Utah to caves where pictographs painted on stone walls were day counts of sacred calendar days of the year. He showed us one 91-day count glyph similar to a count glyph in Southern Utah. He also showed us stone cairns positioned in the nearby desert terrains that were aligned to sun, moon and star rises on the eastern horizon [7]. An ancient observatory has also been identified at Wadi Sayq, western Oman [8].

Mesoamerican Observatories have orientations to ORION!

The ancient Izapa Temple Center in Southern Mexico (ca. 500 BC–on the border of Guatemala) is an Observatory. It is the most important Observatory in Mesoamerica being at 15 degrees North Latitude to measure the sacred 260-day Maya Calendar. The main orientations at Izapa are to the Orion constellation. (Norman 2015: 79-84). Astronomer Anthony Aveni says: “In southern Mesoamerica . . . the zenith passage dates are announced by the relative position of Orion’s Belt, the Pleiades, and the Southern Cross in the night sky” (1980: 40-41). [9]

The three stars in Orion, Saiph, Alnitak and bright Rigel, participate in the Izapa zenith drama, appearing just before dawn south of the ecliptic on the August 13 zenith passage. In the north section of
Plaza B, the three cosmic pillar-ball
monuments in triangular formation symbolize
the three zenith stars in triangular
arrangement at the base of Orion. The
builders of Izapa set up the stones to align on
the zenith setting and rising dates of August
13 and April 30, the beginning and end days
of the sacred Maya 260-day creation calendar
as an earthly symbol of these three stars. If you push a stick straight into the ground when the sun reaches its zenith, it casts no shadow. (Aveni 2009:49 Fig. 6-3). [11]

The pyramids at Teotihuacan, Mexico (ca. 50 AD), are oriented to mountain peaks, and appear to be placed along the great “Avenue of the Dead” in the pattern of Orion’s belt. The famous pyramids at Tikal, Guatemala (ca. 600 BC) are all aligned to heavenly sun, moon, star rise calendar events. [12]

There were about 100 ancient pyramids built in the Middle East. Most of them were built in Egypt, and we know that some of the ancient builders were Israelites who escaped Egypt with Moses. All were built using the Royal Egyptian cubit. [13]

There are over 1,000 ancient pyramids built in Mesoamerica by people who used the Babylonian and Egyptian cubit to build them.

“The enormous awe inspiring Teotihuacan Temple Center, near Mexico City, is the crowning massive architectural achievement in Mesoamerican antiquities. Its three grand pyramids, Pyramid of the Sun, Pyramid of the Moon, and Pyramid of Quetzalcoatl, oriented to mountain peaks around the valley, were designed to keep the eyes of the city’s inhabitants on the heavens, man’s destiny. This religious political center was every bit as grand and forceful in its design as the pyramids of Egypt and ziggurats of Mesopotamia. . . .Pyramids are oriented to August 13 sunset. Three large pyramidal mounds are oriented to mountain peaks on summer solstice” and sun zenith passages, just as at the Izapa Temple Center in Southern Mexico. Teotihuacan was built around the first century AD. by groups who migrated from the south. “The feathered serpent life-god Quetzalcoatl (meaning feathered or ‘raised up serpent” in Nahuatl) is depicted at Izapa, Mexico and Teotihuacan, Mexico. Carbon dating of chocolate from the area of Izapa has confirmed ancient travel trade between Izapa and Teotihuacan in the first century BC (Coe 2015). [14]

GENEALOGIES in the Old World 1 Nephi Chapter 3 to 5.

Genealogies, written throughout the Old Testament, were important to the Jewish people. After Lehi and his family had left Jerusalem, the Lord commanded Nephi “that thou and thy brethren shall return to Jerusalem. For behold, Laban hath the record of the Jews, and also a genealogy of my forefathers, and they are engraven upon plates of brass. Wherefore, the Lord hath commanded me that thou and thy brothers should go unto the house of Laban, and seek the records, and bring them down hither into the wilderness. (1N 3:2-5).

After several attempts, the records were obtained and taken to the tent of Lehi. It is written: “And it came to pass that my father, Lehi, also found upon the plates of brass a genealogy of his fathers; wherefore he knew that he was a descendant of Joseph; yea, even that Joseph who was the son of Jacob, who was sold into Egypt, and who was preserved by the hand of the Lord. . .” (1N 5:14).

“Most of the Classic Maya (250 AD–900 AD) stone monuments at major antiquities are genealogies of Maya kings tracing their ancestry back – some back to the beginning of time to the first man born from God (showing their royal birth which gave them the right to claim rulership and be
supported by the people. An example of this type of Classic Maya monument with genealogy on it is Tikal Stela 22”.

“During this period the Mayas numbered in the millions, they created a multitude of kingdoms and small empires, built monumental palaces and temples, engaged in grandiose ceremonies, and developed an

elaborate hieroglyphic writing system. The social basis of this exuberant civilization was a large political and economic inter-societal network (world system) extending throughout the Maya region and beyond to the wider Mesoamerican world.”

“Maya kings did not seek to conquer and assimilate neighboring populations to their way of life, but rather to defeat them in war and demand tribute from the people and their king. Tribute from defeated groups came in the form of goods or people. The victorious city would take the spoils of war as their own and use the rest as offerings to the gods.” (http://mythicjourneystravel.com/the-kingdom-of-the- maya-history/) [15]

This overview will be followed with more in-depth articles throughout 2020 as we study the Book of Mormon and see evidences of migrations from the Old World to the New World beginning with Mesoamerica. During the first century BC we learn in Alma 63 and Helaman 3 that there was much shipping and migrating to areas north (North America) and south (South America) from the ancient high civilizations where millions lived in Mesoamerica. The migrants took with them the same tools, cubits, geometry, observatories, pyramids and genealogies that were prevalent in the antiquities of Mesoamerica.

So interesting! It is fabulous to live in this modern age which gives s much focus to exploring ties to ancient civilizations. After all, some time eons from now, WE will be considered an ancient civilization, light years behind our eternal journey!

Cheryl & Norm, I really enjoyed reading this article and delving deeper into this study in which I have always had a peeked interest. It's good to know you are still discovering and sharing. Thank you for this insight. I look forward to more articles.