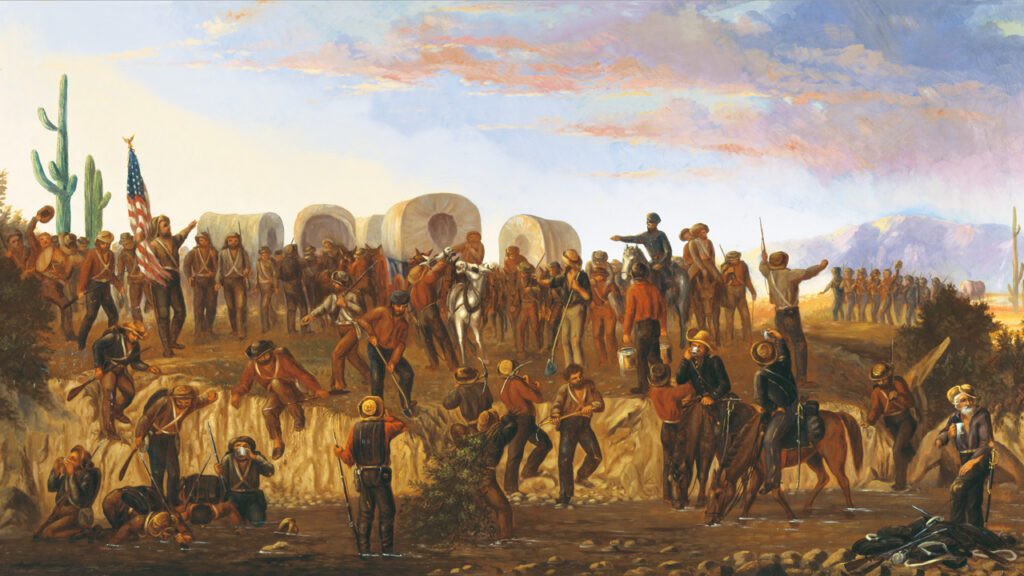 The accomplishments of the Mormon Battalion are indisputable — it helped create wagon roads as it marched through what is now southwest United States. After their enlistment was completed, battalion members helped with additional wagon routes connecting California, Nevada and Utah. Many followed those routes, and they impacted the boundaries of the United States.

It was in 1846 — 175 years ago  — and Church members had left Nauvoo, Illinois, due to persecution and mob violence, and they were scattered across Iowa and into Nebraska as they prepared to head west to the Salt Lake Valley, then in Mexican territory. President Brigham Young had sent a request to U.S. President James K. Polk for assistance to move west. The call for 500 men to join a battalion to help fight in the Mexican American War wasn’t what he expected, either.

Their service helped them finance the move West, which prompted “Brigham Young to credit the battalion with being the ‘temporal salvation’ of the Church,” said Brandon Metcalf, a historian with the Church History Department. Beyond the financial benefit of being able to outfit their families and help others move west, they gained experiences from the nearly 2,000-mile march that would benefit them as the Saints settled in the West.

“It is difficult for us to even fathom such a journey in our comfortable age of air-conditioned automobiles, paved highways, availability of food and water, clothing and supplies, and technology that allows us to instantly communicate with loved ones and friends,” Metcalf said.

On the 175th anniversary of the Mormon Battalion’s march, which started on July 16, 1846, there are several lessons from their journey that can apply today. Also, researchers from the Mormon Battalion Association have been working with documents, including from the National Archives, to verify who served in the battalion.