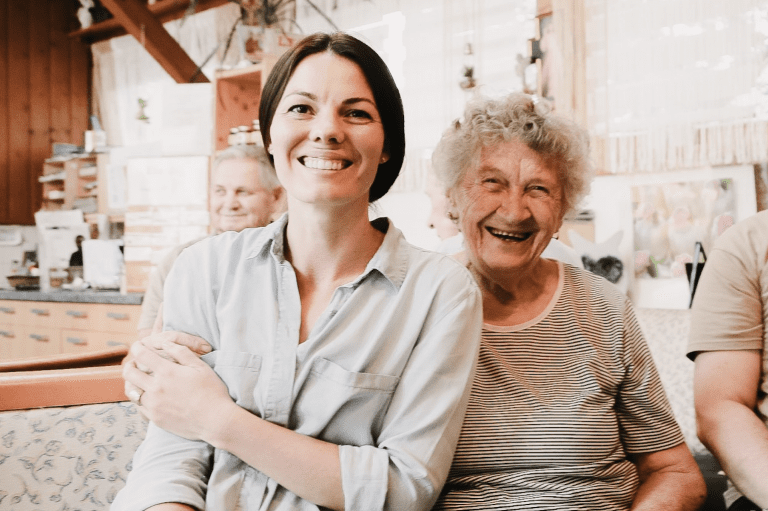 Cover image: A living relative Stacie discovered while visiting the ancestral village of her second-great-grandmother Maria.

Stacie Kingdon Proctor was 18 months old when her parents divorced. As she grew up, she moved schools 18 times before the 10th grade. Though she loved her parents and sought connection in each new place she moved, Stacie’s life felt perpetually fragmented. As an adult, Stacie left an unhappy marriage, compounding feelings of disconnection.

Stacie was remarried, and the future looked bright. But in 2014, her uncle, who had been a kind and loving influence for her growing up, committed suicide as a result of mental illness, triggering her own deep depression that eventually required hospitalization. She felt hopeless, helpless and alone, and after being discharged from the hospital, she was desperate for a sense of connection—a sense of belonging. She didn’t know who she was or how to overcome her feelings of isolation from her husband, family, and even God.

After a year and a half, and still feeling weighed down with confusion and loneliness, Stacie and her husband Andy moved to Huntington Beach, California where she was called as a Young Women advisor. Though she continued struggling to understand her mental illness and feeling disconnected from reality, she stepped into leading the Young Women in searching out their family history.

This was a learning curve for her, but as Stacie learned how to navigate FamilySearch, she not only helped the Young Women find their family trees, but she began to discover her own family roots. For the first time since her hospitalization, she felt a glimmer of connection.

As Stacie searched, her computer screen was filled with names extending back generations on her father’s side. Her mother, Linary, however, was adopted, and her name sat alone on the page—disconnected from any ancestors. Parts of Linary’s past held unresolved pain and questions, but as Stacie discussed these connections with her in a gentle and compassionate way, they began realizing that learning about generations before was offering healing they each needed.

Stacie jumped into researching by messaging her mom’s half-sister on Facebook to get any additional details she could about Linary’s biological parents.  She learned her biological grandmother loved animals and crafting and struggled with mental illness her whole life, too. She regretted giving Linary and her siblings up for adoption, and her biggest wish was to have her family reunited. Stacie began to see some connections. She saw that mental illness ran through her genealogy. She also got the biographical information of her biological grandmother and great-grandparents and put it in to the family tree. With the missing links restored, Linary’s name was suddenly not only connected to a family line, but a line that traced back to 557 B.C.

Seeing name after name, generation after generation connect all the way forward in time to her own name gave Stacie a beautiful perspective she had never known before. Instead of being disconnected, alone, and hopeless, she connected. She belonged. She was a link in a chain of familiar souls with meaningful stories.

Stacie called Linary to share with her their family tree she had discovered, and the mother she had very rarely seen cry, melted into tears. Though they were hundreds of miles apart, this moment bound up their broken hearts and bound them together. It was a healing moment—the moment Stacie reclaimed her heritage.

The more family history permeated Stacie’s life, the more she felt a sense of purpose and an understanding of her deeper identity. She took a DNA test and traced her family lines through FamilySearch to Hungary, England, France, Scotland, Ireland, and even Egypt. She came from farmers who spent their lives toiling in fields and kings and queens who lived in the lap of luxury. She saw love, kindness, hardship, mental illness, and true humanity that flowed in her family tree and brought meaning to her.

In her pursuit to learn more, Stacie decided to go to Hungary and Austria with her husband and father to search for family records and walk through the villages where her ancestors had walked. In a region known as Burgenland, they spent time in the archives and parishes searching the records that kept the history of the births, marriages, and deaths of her ancestors—records that were not available digitally. As she examined the records, she was filled with emotion.

“It swept over me, this awareness of how precious life is and really how short it is. All of these generations were passing by me as I flipped through the pages,” Stacie said. “We are so involved in the details and decisions, feelings and emotions of our lives, but it was a beautiful thing to step back and see the dates representing an entire person’s life, and think about what really matters.”

While gaining this perspective did not dismiss the pain of depression, she saw that both joy and sorrow is a common part of the human experience, and that generations before her had thrived in even the most difficult circumstances and had continued on—even through deep depression. One Hungarian grandmother’s story in particular gave her courage.

“I’ve felt a very strong, loving connection to my second-great-grandma, Maria. She came to America on her own at the age of 25. It was amazing to think of how much courage she would have had to make that journey.”

Now, when Stacie faces challenge, she thinks of her grandmother. When Stacie made the difficult decision to leave her job and pursue a new path at the end of last year to create a new lifestyle blog, Royal Hungarian, she walked in to give her notice and thought, “Be brave, like Grandma Maria.” Stacie sometimes wears the gold locket that belonged to her great-grandma, Maria’s daughter, as a physical reminder of the strength she comes from.

Though she actively continues to manage her mental wellness, Stacie’s eyes now see the world differently. She no longer looks outside and wonders who she is and why she is here. She sees hope, goodness, and purpose. Instead of seeing her past as fragmented, she has a perspective that reaches further back in time to see she comes from an unbroken chain.

Because family history has brought so much meaning to her life, Stacie created a video to share her story and to enter the 2019 RootsTech Film Festival. The festival’s theme, “Connect. Belong”, resonated with her, and she hopes sharing her story will inspire others to also find connection and belonging through their family heritage.

ClickHERE to see Stacie’s video, and vote for any entry that touches your heart.

Voting for the RootsTech Film Festival will run from February 1-14. The first-place winner will receive an all-expenses paid trip for two to their ancestral homeland. Winners will be
announced on March 2.

Thank you, Anne Bradshaw, for your very kind post. I am Stacie’s mother. It has been quite the journey watching Stacie grow and develop since birth, especially considering multiple intense challenges she has been faced with by no doing of her own. She continues doing a beautiful job overcoming them.

Fantastic story, beautifully written. No doubt in my mind that Stacie’s life has great purpose and this account of it so far will help countless numbers. She is already a winner, no matter what else happens.