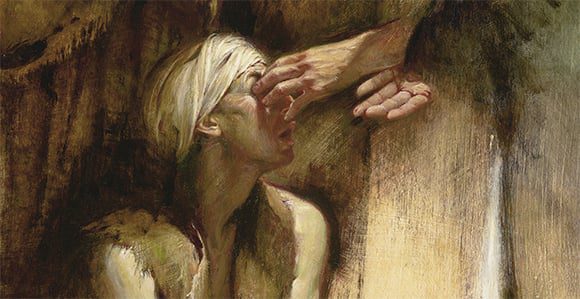 How a Blind Wood Carver Showed Me Courage in Adversity

One of the earliest stories I wrote for the Church News remains one of the most vivid in my memory. It was about a blind wood carver who gave me a glimpse of courage in adversity and hope during trials. I wrote about him for the January 30, 1972, issue of the paper.

Fritz E. Bollbach was born in East Prussia in 1910. He was baptized a member of the Church in 1921. He was sent to a Nazi labor camp before World War II began. After his release, he married Elli Gertrude Worch in 1935. During the war, he repaired weapons and machinery for the German army; he was captured by British forces and sent to a prisoner of war camp in 1945. In the fall of 1946, he was released to West Germany and reunited with his family.

He worked with others to build homes for refugees from East Germany. He served as president of the branch in Langen from 1954 to 1956. The Bollbachs’ 13-year-old daughter, Sigrid, was killed in an accident during that time. He and his wife and their two other daughters, Ursula and Hannelore, immigrated to the United States in 1956; they became U.S. citizens in 1993.

After he lost sight in his right eye in 1957, he had a hard time finding work. “In three years I worked on more than 25 jobs,” he said. “Each morning when my wife left home for work at 5 a.m., I would kneel and pray. I often cried to my Heavenly Father. I never gave up on prayer, although I did not seem to get an answer.”

He said he had a certain wonderful, happy feeling after he prayed on Thanksgiving Day in 1960. “I could hardly wait for my wife to come home,” he said. When she did, he asked her to look in the newspaper ads for a piece of ground for sale. “She told me we were not able to pay the gas bill, let alone pay for a piece of ground. I told her nothing is impossible when we believe.”