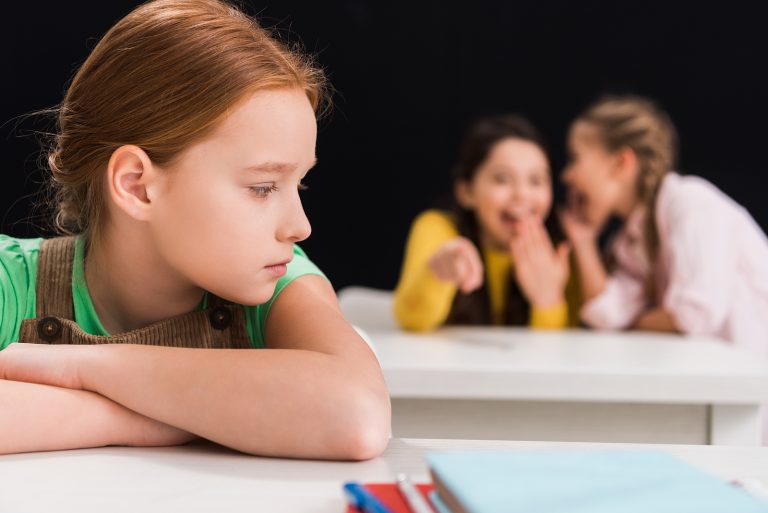 “That girl was so rude!” a girl about age 12 said to her mother as she skated off of the roller rink. Immediately her mother started toward the mother of the “rude” girl to tell her to control her daughter and to tell the daughter to apologize for her unkindness. This mother clearly loved and cared for her daughter and was her daughter’s social advocate. “But,” I wondered, “why is this mother not advocating for the social and emotional strength of her daughter?”

It’s always hard when we see our children mistreated by other people. I vividly remember feeling a pang in my heart when my son was excluded from social situations because he was homeschooled, and when boys in the neighborhood tried to bully him because he was different. However, I thought differently than the other mother. I realized that these hard, often offensive moments in life would end up becoming some of the greatest lessons for my child.

When a parent becomes emotional because their child is emotional, like the mother in the roller-skating story, and takes over the problem solving, then the child learns:

In contrast, when a parent chooses to stay calm and make the situation a learning moment instead of an emotional devastation, then the child learns:

I’m sure there are many more lessons not listed here. But, the point of these lists is to show that parents are always teaching lessons, but they might not really be thinking about what lessons they are teaching their children. Both lists teach that mom loves the child, which is likely what each mother wants to show their child with their opposite teaching methods. One mother’s love is focused on the short-term feelings of the child, and the other mother is focused on the long term social and emotional success of the child.

Good parent teaching is a combination of a calm and patient tone and effective communication skills. I recommend the following 7-step formula for dealing with offensive situations.

1. Describe your child’s tone and behavior. “Your body and face don’t look very calm. Let’s talk about the situation.”

2. Point your child toward calmness by saying, “Before we talk about this, let’s take a minute to take some deep breaths and get calm so that we can get our brain ready to solve the problem.”

3. Praise child for calming down. “Those were some really good deep breaths. You look very calm now. Great job.”

4. Listen to the child calmly tell you the story and acknowledge what you heard.

5. Seek to understand your child and the other child. “It sounds like she said some hurtful things to you. That isn’t nice. We don’t know why she felt the need to do that. Maybe you crossed a boundary or maybe she misunderstood your actions. It could be that she doesn’t really know how to communicate her frustration in a productive way. If she knew the skill, this would have been a good time to use the skill called Disagreeing Appropriately.”

6. Prepare yourself to handle this situation or future ones like it. “If you did anything you shouldn’t have done to lead to this behavior, then it would be good for you to apologize for your behavior, even though she had bad behavior, too. And, your apology could cause her to reflect about her behavior, too. If you didn’t do anything to cause this problem, then essentially this is a “no” answer you have to accept. You wanted her to be kind to you, but she wasn’t. That’s like hearing a “no” answer from someone. Remember that the final step to accepting a “no” answer is to drop the subject. Tell yourself to not think about it anymore. If you keep thinking about the offense, it will only hurt you…”

7. Give them encouragement and a hug. “You are learning really mature social skills. Over time, dealing with hard situations will become easier and easier for you! Great job!”

The biggest problems we might be facing are not people being mean or causing offense, but training people to be both victims and oppressors of their perceived oppressors. This vicious cycle is a trap that leads so many people to entitlement in relationships and general unhappiness. Teach your children the skills they need to handle potentially offensive situations, and they will experience true emotional and social freedom for life.

Be trained by Nicholeen at her next Teaching Self-Government Parenting Mastery Training in Lehi, Utah, October 7-9.

In order to see a full picture here, I think bullying needs to be addressed. While there is some great advice in this article, there are times when accepting aggressive behavior is wrong. Also, whether the parent gets involved really depends on the age of the child. Sometimes parental intervention is necessary, especially if there are repeated offences. I believe it is much better for the PARENT to remain calm and to show a little empathy for the child (not dramatic coddling), rather than to immediately tell the child to "calm down." When someone tells me to "calm down," it feels like what they are really saying is, "I don't really care that you are upset, and your feelings don't really matter."

Good ideas. I recommend that every reader consider the five steps in emotion coaching described by John Gottman in Raising an Emotionally Intelligent Child (chapter 3).