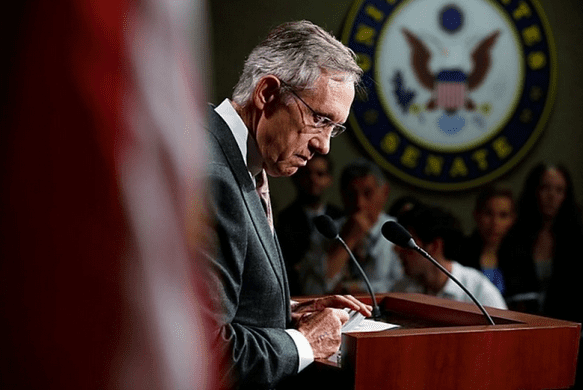 When Sen. Harry Reid (D-Nev.) steps down from the Senate in early 2017, Mormonism will lose its highest-ranking elected official — and the most high-profile example that yes, there is such a thing as a Mormon Democrat.

Mormons are the most Republican religious group in America, and they are moving to the right. A 2007 Pew study found about 66 percent identify with the party. By 2012, Pew found that figure had risen, and 74 percent of Mormons identified as Republican.

During an address at Brigham Young University in 2007, Reid talked about what it was like being a Democrat in a deeply Republican faith.

“It is not uncommon for members of the Church to ask how I can be a Mormon and a Democrat,” he said. “Some say my party affiliation puts me in the minority of our Church members. But my answer is that if you look at the church membership over the years, Democrats have not always been the minority, and I believe we won’t be for long. I also say that my faith and political beliefs are deeply intertwined. I am a Democrat because I am a Mormon, not in spite of it.”

I am so glad we live in Europe. We may vote democratic as mormon, without being stone throwed at

Jim, it sounds to me that you have been eating some of those sour grapes yourself.